Grappling With Yiddish Words That Punch Above Their Weight 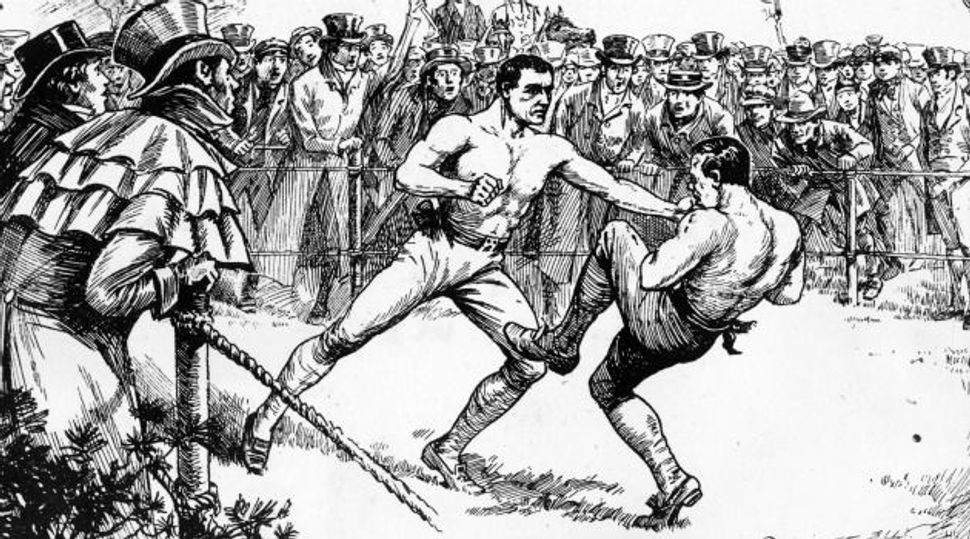 A reader identified as “JA” wants to know: “Does the English word ‘slug,’ as in to slug someone, come from Yiddish shlogn, to hit? They certainly sound very similar.”

My thinking about this went through three stages. Stage 1, my immediate reaction, was that “slug” and shlogn — or shlugn, in the Yiddish some of you are used to — are obviously related, not in the sense of one coming from the other like a son from a father, but rather like cousins who descend from a common ancestor.

Stage 2 followed consulting the dictionaries. It seemed I was wrong. “Slug” and shlogn, appearances to the contrary, are not related.

Stage 3 had me asking: Can it be that it’s the dictionaries that are wrong and “slug” and shlogn are related after all?

English and Yiddish are themselves cousins, and not too distant ones at that. Both belong to the Germanic family of languages, one of the many branches of the Indo-European clan, in which we find such widely dispersed kinsmen as French, Russian, Lithuanian, Greek, Persian and Hindi.

The original Indo-European language, known to linguists as proto-Indo-European, originated many thousands of years before the Common Era somewhere near the Black Sea and spread in different directions, producing a first generation of descendants that included ancient Latin, proto-Germanic, proto-Slavic, proto-Baltic, ancient Greek, Old Persian and Sanskrit.

This is why so many English and Yiddish words with the same meaning look and sound alike, such as “hand” and hant, “foot” and fus, “nose” and noz, “milk” and milkh, “bread” and broyt, “butter” and putr, etc. And it’s why one would automatically think that “slug” and shlogn (from German schlagen, to hit — the final “n” is the German/Yiddish infinitive ending) must share a common Germanic root, too — especially since old Germanic “s,” while remaining “s” in English, turned into “sh” before a consonant in German/Yiddish. (Think of “sleep” and Yiddish shlofn, “swim” and Yiddish shvimn, “snow” and Yiddish shney, and so on.)

And yet when one asks the dictionaries, one is told this isn’t so. “To slug” in the sense of to hit, we are informed by the august Oxford English Dictionary, can first be documented as a variant form of “to slog” (a verb used today mainly in cricket, where it denotes hitting the ball hard but inelegantly) and is of “obscure origin.”

How can that be, you ask, when the parallel with German schlagen seems so clear? The OED’s editors, needless to say, were not unaware of schlagen, but they connected it to another English word, “slay” — not the “slay” of “to kill,” but “slay” meaning “an instrument used in weaving to beat the weft,” called slag in Old German.

I was now in Stage 2. Who was I to challenge the OED? And yet its verdict bothered me. The resemblance between “slug” and schlagen/shlogn just didn’t seem likely to be a coincidence. Could there be any grounds for arguing that it mightn’t be?

I thought for a minute. The “g”-to-”y” shift took place early on in Old English’s development, in the first centuries of the Common Era. Were there any Germanic languages that might have introduced a word like “slug” or “slog” into English after this shift took place, so that the “g” would not have been affected by it? Indeed there were.

Starting with the ninth century, large areas of northern and eastern England fell under the control of Danish invaders, who bequeathed to English such everyday words as “egg,” “dirt,” “leg,” “sky,” “take,” and “ill” – and in Danish, the word for a blow is slag, as it also is in Swedish and Norwegian. (In contemporary Danish, to be sure, slag is pronounced “slow,” but in early medieval times the “g” was still sounded.)

Could slag, then, have entered medieval English from Danish and lived on there to become “slog” and “slug”? I can’t on the face of it imagine any reason that it couldn’t have — apart from the fact, that is, that the OED’s all-knowing editors didn’t think of it. That’s undeniably a weighty reason, but not quite weighty enough to carry the day. I vote for a “slug”/shlogn connection. It’s better than obscurity.

Grappling With Yiddish Words That Punch Above Their Weight