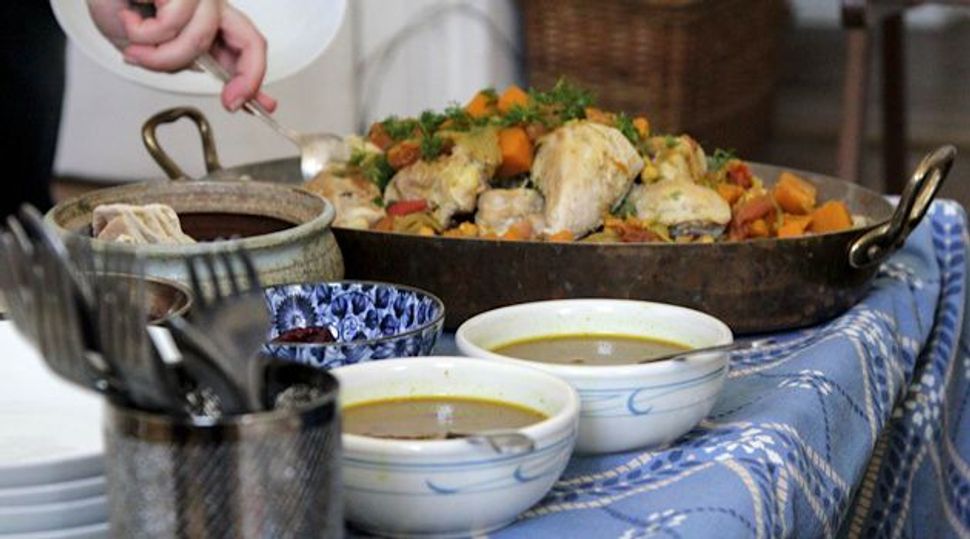 Gazans are used to talking with visitors about the political situation with Israel. But it’s not every day that two writers come knocking with questions about local cuisine.

“Everyone wants to hear about borders, the situation, the blockade,” said Maggie Schmitt, co-author with Laila El-Haddad of the new cookbook, “The Gaza Kitchen.” “We said, ‘No, no. We want to talk about lentils.’”

For two months, El-Haddad and Schmitt traveled the densely populated Gaza Strip learning about traditional foods and culinary techniques to create what is likely the first cookbook — and most certainly the first English-language tome — on Gazan home cooking.

“The Gaza Kitchen” is part cookbook and part anthropological study. Zooming in on the lives of every day Palestinians, it argues that diet and cuisine are shaped by Israeli policy. Hamas, meanwhile, is referenced briefly, most notably in a discussion about the merits and drawbacks of the Hamas-led government’s program for agricultural self-sufficiency.

Schmitt, an American writer based in Madrid, first visited Gaza in 2009 on a citizen diplomacy trip shortly after Operation Cast Lead, the Israeli military incursion into Gaza in response to Palestinian rocket fire. She was researching a story on Gazan food and found almost nothing online, save for a magazine article and a few blog posts by El-Haddad, a Palestinian journalist in Maryland who grew up between Saudi Arabia and Gaza. Schmitt made contact with El-Haddad, and the two decided to write a cookbook that would rectify the lack of English-language writing on Gazan cuisine and culture.

In June 2010, they met in person in Gaza. El Haddad’s parents, who live in Gaza City, helped the pair get in touch with dozens of Gaza’s renowned home cooks. “The Gaza Kitchen” introduces readers to 89-year-old Um Ibrahim, who shares a recipe for fermented wheat stew and talks about her family’s displacement during the 1948 war. Readers also meet Um Hana, a talented home chef who hid with her husband, his second wife and their numerous children in a storeroom for 22 days during Cast Lead. But not all the stories are about suffering: “The Gaza Kitchen” includes a sidebar on the Zeitun Women’s Cooperative, which creates pre-cooked meals for families in Gaza City and earns its members a living in the process.

Though Gaza is a scant 25 miles long, its traditional cuisine is richly varied and distinct in the region; the book includes recipes for dagga, Gaza’s classic hot tomato salad, shorabit frikah, green wheat soup, maqlouba, upside-down casserole and sanayit hulba, fenugreek olive oil cake. Many dishes feature a savory-sweet spice blend made with nutmeg, ground red pepper, cinnamon and other seasonings called ibharat qidar, which reflects Gazan’s position between southern Arabia and the Mediterranean on an ancient spice route. Unlike Palestinian food in the West Bank — and most cuisines in the Levant — Gazan food is very spicy. It also rivals Greek cookery in its prolific use of dill seed and dill weed.

What and how Gazans cook has been influenced by the conflict with Israel. According to the book, the strip’s iconic red tahini — made by roasting sesame seeds — has all but disappeared from Gaza kitchens since Israel began flooding the local food market with inexpensive white tahini. Refugees in Gaza have incorporated food rations from the United Nations Refugee and Works Agency, such as powdered milk, into their cooking. And the avocado, introduced to Gaza by Israeli settlers in the 1980s, is now a favorite ingredient.

In writing “The Gaza Kitchen,” Schmitt and El-Haddad spent countless hours testing and refining recipes that had never before been written down. “So much of the challenge we faced was transforming oral knowledge and making it usable,” said El-Haddad. Yet even with the book in hand, a home cook approaching Gazan cuisine would do well to employ a degree of intuition and improvisation — like Schmitt and El-Haddad did when they cooked with me in March while on a book tour in New York City.

With El-Haddad’s four-month-old daughter in tow, the pair arrived at the apartment of a friend of mine. On the menu was maftoul, Palestinian couscous served with yakhni, a savory aromatic stew of chicken, butternut squash, tomatoes and chickpeas. A classic Gazan comfort food, “Palestinians request it when they are coming home from abroad,” said El-Haddad. 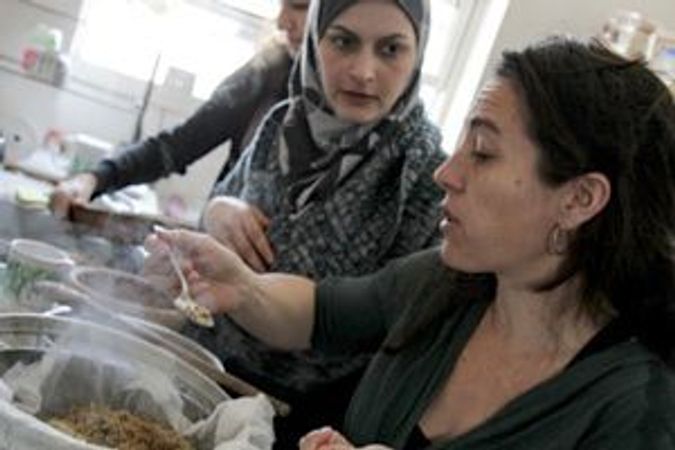 She slipped her baby onto a couch in the living room and got to work on the chicken, meticulously removing the fat from the raw meat and scrubbing it with a fresh lemon over the kitchen sink. This fastidiousness is commonplace in Gaza; as a child of an Arab cook it’s the first thing one learns, said El-Haddad.

“Not all home cooks are quite as neurotic as Laila,” Schmitt chimed in with a grin. Taking over for El-Haddad, she poured a heavy drizzle of olive oil into a pot and dropped the raw chicken in. As the chicken popped and crackled, the two took turns chopping vegetables. Schmitt dumped several mugs of water over the frying chicken to begin creating the stew.

El-Haddad then produced two small bags of dried maftoul. Browner and larger than the couscous found in most American markets, it was created by a member of the Zeitun Women’s Cooperative named Lulu, whose burgeoning maftoul business El-Haddad and Schmitt helped to finance. The pair spritzed the grains with water and then set them to steam atop a cheesecloth draped over the chicken pot.

Next, El-Haddad held up a shallow clay bowl. “This,” she said, “is the soul of Gazan cooking.” Considered a treasured family member by some Gaza home cooks, the zabadiya is used as a mortar in which to crush spices and as cookware for dishes such as zibdiyit gambari, or shrimp in a clay pot. This particular zabadiya was created by a potter in Gaza City; El-Haddad’s parents transported it on a recent trip to the United States.

El Haddad used a wooden pestle to crush salt and dill seed — known to Palestinians as “locust eyes” — into the zabadiya. Pounding each ingredient as she went, she added red chili pepper flakes, dill weed and onions. The result was a spicy green and red mix that she added to the maftoul. It’s called the “bride of the maftoul,” she told me. Why? “Because without it, it wouldn’t be a wedding.”

In a small pan, El-Haddad and Schmitt sauteed the vegetables with a spice blend from Gaza City. The cooked chicken was removed from the pot, the vegetables went in, and the fragrant maftoul was lifted off its cheesecloth sieve.

Minutes later, El-Haddad and Schmitt emerged from the kitchen with an oval platter of steaming maftoul topped by the yakhni stew. It was served with the reserved liquid from the pot — a brown, satiny gravy — and dried sour plums. I dug in. The dish had the sweet hominess of chicken pot pie, cut through with the blaze of Gazan spice. It was familiar and novel all at once. But then again, so is the idea of a kitchen in Gaza.

For the complete maftoul and yakhni recipe, click here.

Naomi Zeveloff is the deputy culture editor of the Forward. Contact her at [email protected].