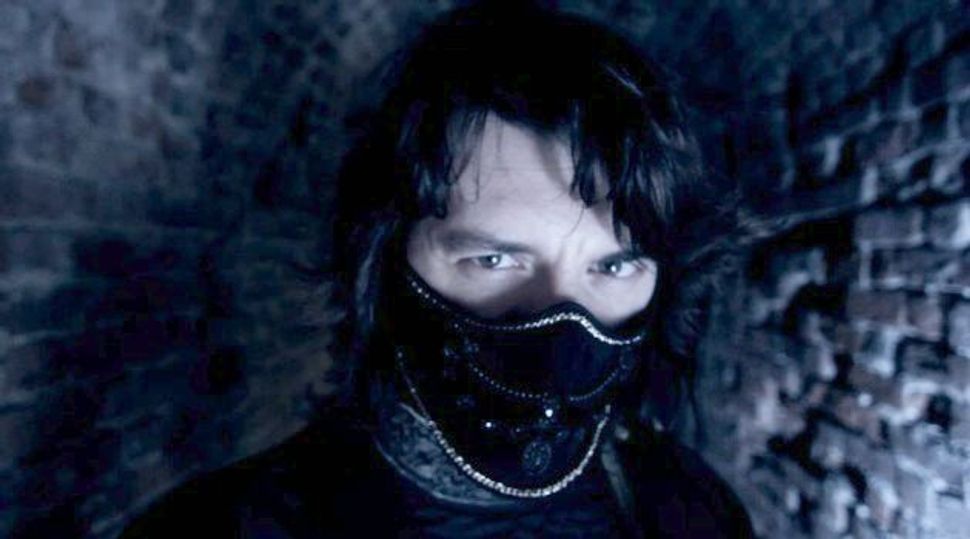 Portrait of the Artist as Primordial Man: Despite his Hebrew name, there?s no need to suspect that Adam Kadmon is Jewish. He has made appearances in Theosophy and in the work of James Joyce. Image by Italia 1

Just who is the mysterious and much talked about Italian television personality and conspiracy theorist Adam Kadmon, who always appears on TV with a mask to hide his identity?

Is he an imaginative Italian investigative journalist? The descendant, as he claims to be, of an ancient family endowed with mystical powers, stemming from seven androids created thousands of years ago by an extraterrestrial geneticist in ancient Sumeria? A former peace activist — as he also claims — who was attacked and put out of commission in 1986 by a secret group of mobsters called “the Illuminati,” only to resurface again, in 2009, as a popular media figure?

It’s anyone’s guess. Meanwhile, as the guessing goes on, so does a weekly show on Italia 1 television in which Adam Kadmon, which means “primordial man” in the Hebrew of the Kabbalah, unravels such “mysteries” as the abdication of Pope Benedict, the death of Hugo Chávez and the secret life of Michael Jackson, and tilts with the Illuminati, who are still out to get him.

Despite his Hebrew name, there’s no need to suspect that he’s Jewish, because the kabbalistic figure of Adam Kadmon has had literary currency outside the Jewish world for a century or more; this goes back at least as far as the late 19th-century vogue for Theosophy, a movement that drew eclectically on a wide range of mystical sources.

In her 1892 Theosophical Glossary, the famed “Madame Blavatsky,” who was living in New York at the time, has an entry for Adam Kadmon that reads in part, “Archetypical man; Humanity; the ‘’Heavenly Man’ not fallen into sin….” Readers of James Joyce’s stream-of-consciousness novel “Ulysses,” which was published in 1914, may remember Joyce’s character Stephen Dedalus imagining Earth’s first woman and thinking, “Spouse and helpmate of Adam Kadmon: Heva, naked Eve.”

Joyce (who must have picked up the term from some theosophical tract) should have, of course, written “Hava,” not “Heva,” and he was confusing the kabbalistic adam kadmon with the biblical Adam of the book of Genesis, known in Hebrew as adam ha-rishon, “the first Adam.” The kabbalistic “primordial man,” first found in the 16th-century Tikkunei ha-Zohar, is not the physical Adam of Creation; rather, he is a spiritual prototype antedating Creation and containing in himself the soul of every human being to be born.

As the great scholar of Kabbalah, Gershom Scholem, puts it in his “Major Trends in Jewish Mysticism”: “Adam Kadmon is nothing but a first configuration of the divine light which flows from the essence of En-Sof [God conceived of as the infinitely unknowable source of All] into the primeval space of the Tsimtsum [the space created by God to make room for the universe by His own contraction]…. He therefore is the first and highest form in which the divinity begins to manifest itself after the Tsimtsum.”

The Adam Kadmon of Italian television is unlikely to have read “Ulysses,” much less Gershom Scholem or Madame Blavatsky’s glossary. A book that he is likely to have encountered, however, is the Serbo-Croatian novelist Milorad Pavić’s “Dictionary of the Khazars,” which first appeared in Belgrade in 1984. Also referred to in the novel as Adam Ruhani (Hebrew for “spiritual man”) and Adam-the-precursor, Adam Cadmon (Pavić’s spelling) thinks in dreams; all “dream hunters,” the spiritual detectives of Pavić’s novel, “plunge into other people’s dreams and sleep and from them extract little pieces of Adam-the-precursor’s being, composing them into a whole.” By doing this, and dreaming about “their [own] part of Adam Cadmon’s body,” the dream hunters repair a humanly fractured world and restore unity to its dissension.

Translated into many languages, including English in 1988, “Dictionary of the Khazars” subsequently became something of a cult book among New Age readers with a taste for the esoteric. Can it be a coincidence that the Italian Adam Kadmon first made his appearance under that name in 1986, two years after the publication of Pavić’s novel? The name certainly would have seemed, on the basis of reading or hearing about “Dictionary of the Khazars,” an appropriate pseudonym for a peace activist to take for himself.

Our masked sleuth must have dabbled in other books, too, for his official blog site speaks of Adam Kadmon being at war with the evil Yaldabaoth, the chief demiurge or ruler of the material world in classical Gnostic theology, which greatly influenced Theosophical thought. (Yaldabaoth is an ancient Greek corruption of Hebrew yoled or yeled, “parent of” or “child of,” and elohei ts’va’ot “God of Hosts.”) In Gnosticism, Yaldabaoth and his evil Archons or plenipotentiaries are the rulers of the material universe. Presumably, they are also the gods of the Illuminati, who conspire to take over the world that Adam Kadmon is trying to save.

It wouldn’t make a bad video game. One can’t wait to see who wins.