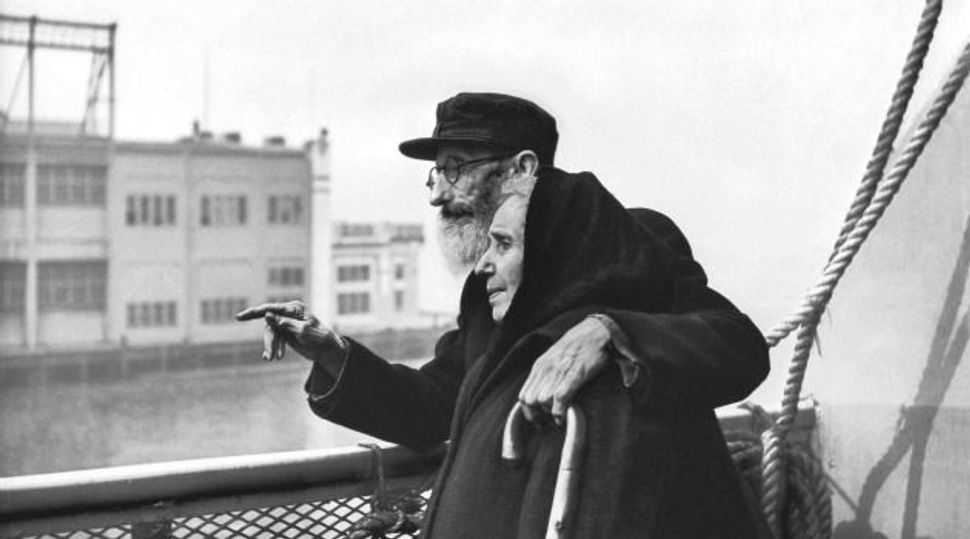 In 1939 Clemens Kalischer was an 18-year-old Jewish refugee from Nazi Germany who was subsisting in Paris, when he somehow scraped together enough francs to purchase a small but potent book — “Paris Vu Par” — containing vital images of the city by the ingenious Hungarian Jewish photographer André Kertész. Kalischer had the volume with him when the French government interned him for being a German national. And it remained one of his only worldly possessions as he struggled to survive through eight labor camps in France over the next year and a half. At times he was so depleted — at one point weighing just 80 pounds — that he would rip away a ragged page or two to lighten his load. But he always kept the book with him.

Kalischer endured, and through a series of miraculous events he reunited with his family and escaped to Morocco just as France was falling to the Nazi invaders. He landed in the United States, penniless, unschooled, weak, speaking no English. Like Kertész, whose book he still carried, Kalischer was a survivor: sharp-eyed, resourceful, alert to his surroundings, and deeply empathetic. His sensitivity soon helped him to earn, less than six years after picking up a camera for the first time, a photography exhibition at the Museum of Modern Art.

Today, at age 92, Kalischer still puts in long hours at his tiny gallery in his adopted hometown of Stockbridge, Mass. But the digital revolution has transformed his lifelong profession, and he has finally put down his camera.

“The business seems to have dried up and I belong to another century,” he says. “I no longer remember how to work the buttons or print my pictures.” His archives of several hundred thousand photographs, spanning seven decades, remain entombed in file cabinets, waiting for a university or private collector to be their savior. Potential buyers don’t seem to stop by to browse through his pictures the way they used to do back in the 1970s or ‘80s.

“I’ve always trusted that when the time was right, the right thing would happen,” he says. “Even now I still trust in something that I don’t know what it is.”

Born in Lindau, Germany on March 30, 1921, Kalischer grew up in Nordhausen. a town in central Germany. His father Hans, a psychotherapist and artist, and mother Ella, a physiotherapist, raised the boy and his younger sister in a household imbued with liberal values and an appreciation for nature, art and fine European culture. In 1930 the family moved to Berlin, where Hans took a post working with disturbed and delinquent children — experience that gave him valuable insights into the rising fears and resentments among Germany’s seething lower-middle class, the Nazis’ primary recruiting bloc.

“Unlike a lot of German Jews,” Kalischer said, when Adolf Hitler rose to power on January 30, 1933, “my father knew disaster was coming and he insisted that we leave Germany as soon as possible.”

After a brief respite in Switzerland, the family fled to Paris. The adolescent boy came to love the city; that was when he acquired the little photography book. In September 1939 he was camping out with a girlfriend in Brittany when he encountered posters demanding that all German nationals report immediately to a local station in Quimper. He jumped on a bus and ran the rest of the way to get there on time. Upon entering the facility, he asked to use the phone to call his parents so he could inform them of his whereabouts. “No telephone for you,” the official told him. “You’re a prisoner now.”

Neither he nor his parents knew if the other was still alive. Then, during one frantic transfer in May 1940, he heard tanks approaching and squadrons of planes in the air. The German blitzkrieg had begun. At Albi, a camp on the River Tarn in southwest France, he ran into none other than his father, and they soon learned that his mother and sister were being confined at a nearby farm. It turned out that his father had an influential supporter: Princess Marie Bonaparte, the great-grandniece of Napoleon I and a prominent psychotherapist (and also Freud’s most famous patient), who had worked with Hans Kalischer. She intervened to gain their release.

The Kalischers were also assisted by American journalist Varian Fry, who helped numerous others to escape, including Marc Chagall, Max Ernst, Hannah Arendt and Heinrich Mann. With only hours to spare before the Germans took over, the Kalischers were put on a French freighter ship at Marseille that took them to Casablanca. Another ship took them across the U-boat infested Atlantic to Bermuda and on to Baltimore.

Following their arrival in New York in the late fall of 1940, the Kalischers struggled to get back on their feet. Clemens still prized what was left of his little photography book. But returning home one day, he learned there had been a fire at their apartment and a fireman had discarded his most precious possession. He rescued its singed carcass from a garbage heap.

In 1944 he was admitted to study art at Cooper Union, then found his way to a photography class at The New School with the famous Manhattan photographer Berenice Abbott. He also gained access to the downtown darkroom of the Photo League, the leftist, mostly Jewish photography salon that was formed by many of the greatest names of American photojournalism, including Abbott, Weegee, Paul Strand, Robert Frank, Richard Avedon and many others.

In 1946 he landed a job as a copyboy for Agence-France Presse and was assigned to cover the final departure of the doomed liner SS Normandie as she headed away to be scrapped. Using a borrowed camera, which he did not know how to operate, he snapped an unusually atmospheric image that was unlike any other photographer’s shots, which pleased his boss. Later, Kalischer visited the waterfront to photograph the war-torn displaced persons as they arrived in New York. “I knew exactly how it feels to be a refugee,” he said.

Roaming the metropolis in the immediate aftermath of World War II, some of his other subjects included longshoremen, train passengers, street vendors, children and pedestrians — ordinary people whose essential humanity he had caught in some decisive moment. He often focused on deeply personal events. Around the same time, he was invited to hang a show for Robert Frank and met Beaumont Newhall, the first curator of photo­graphy at the Museum of Modern Art; shortly thereafter Kalischer was invited to present his own exhibit at MoMA.

In 1950 he settled down in Stockbridge, Massachusetts, where he would eventually get married and raise two daughters. His artful photography garnered him choice assignments from The New York Times, Life and other leading publications, as well as inclusion in Edward Steichen’s landmark exhibition, “The Family of Man,” and other shows. Some of his portraits of celebrities, writers and musicians, such as Rudolf Serkin and Pablo Casals, remain widely reprinted to this day. He also started the Image Gallery, in Stockbridge’s former town office building, to display and sell the work of painters and sculptors — an approach like his attitude as a photographer. “I don’t push myself on people,” he says today. “I try to be invisible and non-threatening, waiting till they are comfortable enough having me around.”

In the early 1950s he traveled alone in the segregated South to photograph the rural poor, visiting out-of-the-way jazz clubs and blues joints. He covered children playing on docks along Manhattan’s West Side and sledding in Vermont. For 60 years he captured the Marlboro Music summer performances in Vermont. His work appears in the permanent collections of such places as the Library of Congress, the International Center of Photography and the Metropolitan Museum of Art. He has exhibited at the Museum of Jewish Heritage in New York City, the Museum of the Jewish People in Tel Aviv, and the site of the former Nordhausen concentration camp in Germany near where he grew up. Although he never got to meet André Kertész — who also escaped the Nazis by fleeing to New York, and died in 1985 — he did meet Henri Cartier-Bresson a few months before that great photojournalist died in 2004.

Over the years, Kalischer has become involved in many progressive causes, ranging from refugee relief to government support of the arts, environmentalism to reconciliation between Jews and Arabs. He joined in efforts of One by One, the multi-generational organization of Holocaust survivors and perpetrators and their descendants. In the 1980s he worked with others in the Berkshires to help found the first community supported agriculture (CSA) project that has since developed into a worldwide movement.

“We live at a time when the whole world seems so self-destructive,” he says. But then his eyes sparkle and his face brightens. “Last weekend I came upon a gathering of bright and wonderful women writers who were saying the most astonishing things and I left full of fresh hope! I could see that it’s not all gone. All is not yet lost.”

Scott Christianson is a writer and filmmaker living in the Berkshires. He is the author of “The Last Gasp: The Rise and Fall of the American Gas Chamber,” and other books, and has directed a documentary film about the Holocaust for ARTE (France) and WDR (Germany).