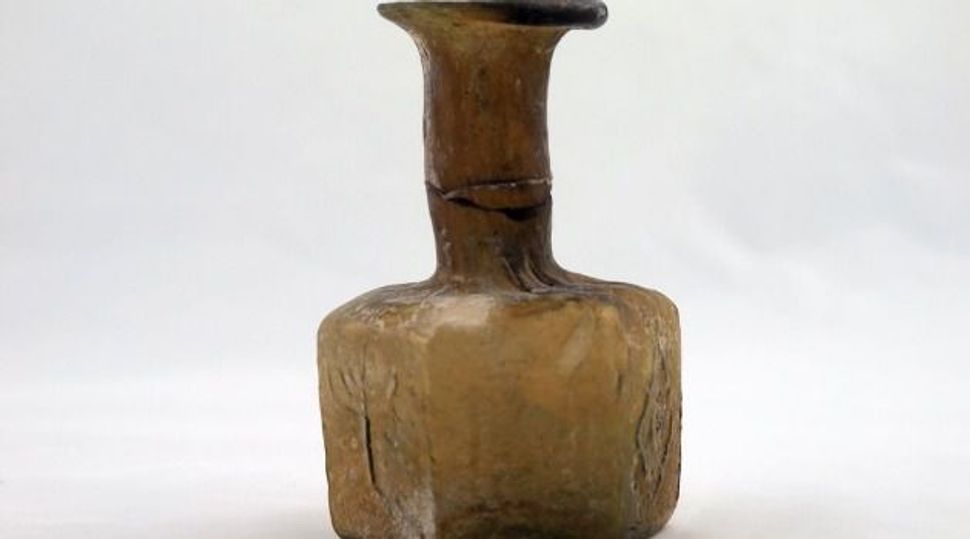 Many of the tourists who trek to Israel inevitably pack for their return flight with a variety of kitschy souvenirs and gifts for friends back home: red “Kabbalah” bracelets; Israel Defense Forces T-shirts; clocks with the Hebrew alphabet; Israeli flag or hamsa key chains. Fourteen centuries ago the props were different, but the business model of selling holy tchotchkes was very similar.

One such keepsake, an ochre-colored, glass “Pilgrimage Jar With Jewish Symbols” dated 578–636 Jerusalem, is on view through August 25 at the Art Institute of Chicago in the exhibit “Late Roman and Early Byzantine Treasures From the British Museum.”

“They were more or less mass produced, although it’s a bit of an anachronistic term,” said Christina Nielsen, the Art Institute’s assistant curator for late antique, early Christian and Byzantine art, of vessels like the Institute’s jar, which has menorahs depicted on two of its sides.

The jars, which are about three inches tall, can be traced to a “very savvy” workshop just outside Jerusalem that made souvenirs for both Jewish and Christian patrons, as well as jugs with nonaffiliated decorations. “They just decided, well we’ve got this thing that everybody wants, and if we tweak the imagery to different groups, we will have more customers,” Nielsen said. “It seems to have served just about anyone who traveled to Jerusalem on pilgrimage.”

Although it’s unclear what exactly the jars were used for, they show up in burial contexts in both Israel and Syria. Some may have been filled with oil from holy sites, which perhaps were thought to hold healing powers. “It was much more than just sort of nice symbolism,” Nielsen said. “It actually became almost like a reliquary, because the holiness of the sites could be sort of rubbed off onto people and then they could take that back home with them.”

Jars similar to the one in Chicago can be found in the collections of New York’s Metropolitan Museum of Art and Ohio’s Toledo Museum of Art. The Met’s “Hexagonal Pilgrim’s Jar With Jewish Symbol” features not only a menorah, but also a shofar and a lulav, the closed frond of the date palm tree.

“Most scholars believe that the jars were used in some way by the Jewish community,” said Helen Evans, curator for Byzantine art at the Met. She notes that Dan Barag, the late scholar and former chairman of the Israel Numismatic Society, suggested that the jars may have held the oil that fourth-century Jewish pilgrims used to anoint a rock when they ascended the Temple Mount on the Ninth of Av.

“There are many theories as to the users and the use of these glasses for all communities, but nothing is certain,” Evans said.

Writing in the catalog for the Met’s 2012 exhibit, “Byzantium and Islam: Age of Transition,” Steven Fine, professor of Jewish history and director of Yeshiva University’s Center for Israel Studies, dismisses the interpretation about the Ninth of Av. “We have no external evidence, however, for such a practice,” he writes. “Flasks depicting the image of the menorah might also have been created by Christians for Christian pilgrims.”

The reverse — jars with Christian iconography being marketed to Jewish visitors — is less likely, according to Nielsen, who notes that the sixth century was a time when Jews were being barred from offices to which they had previously had access, and when tax exemptions they’d been privy to were being closed.

“They were getting really restricted,” she said. “It would seem to me that it would be very odd, given that sort of climate, that a Jewish person in Jerusalem would pick up, say, a vessel that had a cross on it.”

Menachem Wecker is a Chicago-based writer on art and religion. Find out more about him at http://menachemwecker.com or on Twitter, @mwecker.