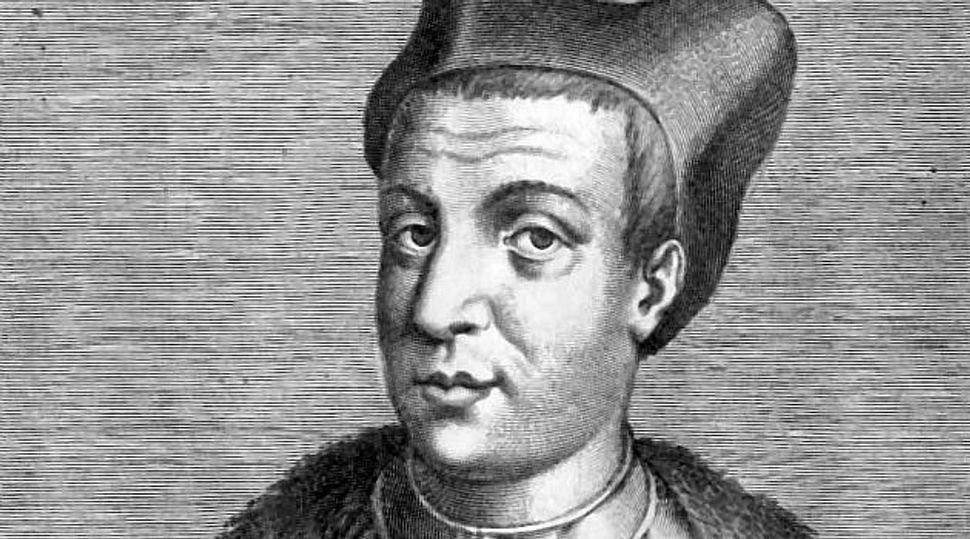 Thinking It Over: Thomas à Kempis was a 15th-century German ecclesiastic and author of the Catholic classic ?De Imitatione Christi.? There, for the first time, we find our maxim put into rhyme. Image by wikimedia

A reader signing herself Goldele asks if I know anything about the origins of the well-known Yiddish proverb “Der mentsh trakht un got lakht,” “A man thinks and God laughs.”

The knowledge that the future, whether conceived of as the result of blind fate or of a divine plan, is not under our control is surely as old as humanity; probably no language lacks a proverbial way of expressing this. The Bible’s way, in Chapter 19, Verse 21, of the book of Proverbs, is “Rabot maḥshavot b’lev ish v’atsat adonai hi takum,” “Many are the thoughts in a man’s heart, but the counsel of the Lord shall prevail.”

In Western literature, the oldest formulation of the idea can be found in Homer’s “The Iliad,” where Achilles, mourning the death in battle of his comrade Patroclus, declares:

Alas, what a useless promise I made then, the day I tried to cheer up Menoetius [Patroclus’s father] at home, telling him that when I’d sacked Troy, I’d bring his splendid son back to him, and with him his share of trophies. But Zeus does not bring to fulfillment all things which men set forth.

The fifth-century-BCE Greek poet Pindar has the line, “For now I am hopeful, although a god controls the outcome.” And in Latin we find this echoed in the second-century BCE Plautus’s “Sperat quidem animus; quo eveniat dis in manu est” (“Whatever the mind may hope for, that which happens is in the hands of the gods”) and the first-century BCE Publilius Syrus’s “Homo semper aliud, fortuna aliud cogitat” (“Always man thinks one thing, fortune another”).

None of this, of course, explains the specific origins of Yiddish “Der mentsh trakht un got lakht.” For that, we have to start with another verse in the book of Proverbs. This one is 16:9, “Lev adam yeḥashev darko va’adonai yakhin tsa’ado,” “A man’s heart plans his path and the Lord directs his steps.” Jerome’s Latin Vulgate, the standard Bible of Catholicism, renders this as “Cor hominis disponit viam suam, sed domini est dirigere gressus eius,” and its use of the Latin verb disponit, “disposes” or “arranges,” for the Hebrew yeḥashev, “plans,” inadvertently, I believe, sets the stage for a chain of developments.

The initial link in this chain is Thomas à Kempis, a 15th-century German ecclesiastic and author of the Catholic classic “De Imitatione Christi.” There, for the first time, we find our maxim put into rhyme. (Picked up by Christian poets in medieval Spain from their Muslim, Arabic-writing neighbors, rhyme first entered Western literature several centuries before à Kempis’s time.)

This took the form of “Homo proponit sed Deus disponit,” and there can be little doubt that à Kempis, who, like any erudite churchman of his age, knew the Latin Bible practically by heart, was influenced in his choice of proponit-disponit by Jerome’s Proverbs 16:9. Human beings, he was saying in an inter-textual commentary, only think they can make future dispositions. In reality, they merely propose.

Since à Kempis’s rhyme was reproducible in all the Latin-derived vernaculars of Europe, it quickly spread to them, too. Although there seems to be no documentation on which came before which, French l’homme propose et Dieu dispose, Italian l’uomo propone e Dio dispone and Spanish el hombre propone y Dios dispone soon followed. So did English “Man proposes and God disposes,” made possible by the large vocabulary absorbed by English from French after the Norman conquest of Britain.

German, however, was never affected by French in this way. (That’s one of the main reasons that it seems so different from English, even though the two are, historically, kissing cousins.) And so when the Germans felt the need for their own version of “God proposes but man disposes,” they took the German verb denken, to think, rhymed it with lenken, to direct or guide, and came up with “Der Mensch denkt und Gott lenkt,” “Man thinks and God directs.”

And yet, in Heinrich Heine’s immortal words, “Wie christelt sich, jüdelt sich” — “Whatever gentiles have, Jews want, too.” If German had “Der Mensch denkt und Gott lenkt,” why not Yiddish? The problem was, however, that while Yiddish had the Germanic verb lenken, it didn’t have denken, whose place had been taken by (the also Germanic) trakhten. What rhymed with trakht? Farakht, “scorns”? The Jewish God was not that cruel. Makht — “makes”? Makes what? Lakht — “laughs”? Eureka!

I’m not claiming that it happened by such a conscious process of selection. Language generally develops by unconscious processes. But the prerequisites were there. Lakht rhymed with trakht, Jews traditionally had a sense of humor about their God and ascribed one to Him, too — and “Der mentsh trakht un got lakht” was so much more delightful than “Der Mensch denkt und Gott lenkt” or “L’homme propose et Dieu dispose.” The thought of God gently laughing on His heavenly throne at our vain dreams and calculations rather than sternly redirecting them like a traffic policeman makes Him seem — well, so much more human.

And so Yiddish, the last of the languages dealt with in today’s column to have acquired a “Homo proponit sed Deus disponit”-like proverb, ended up with my favorite.

He who laughs last, laughs best.