Francesco Lotoro’s Mission To Save the Music of European Jews 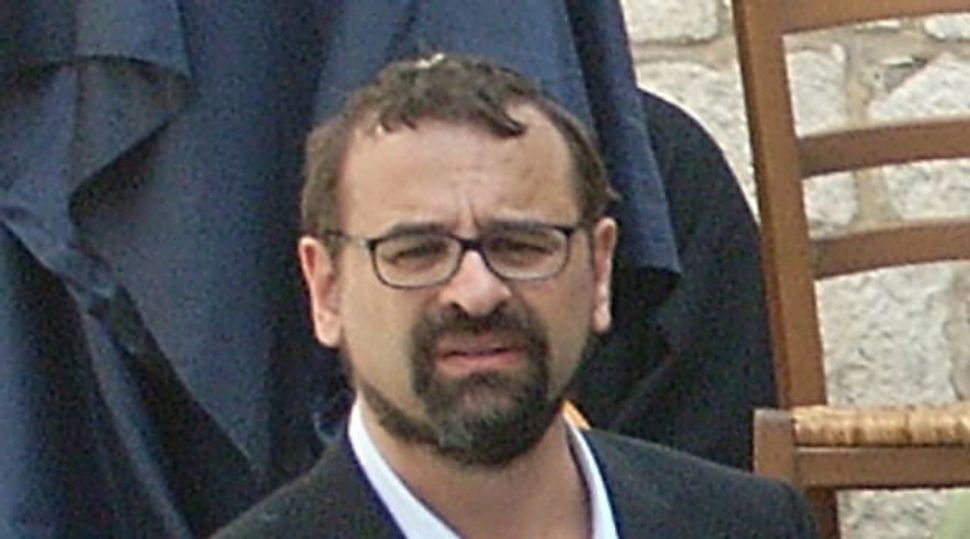 Man on a Mission: Francesco Lotoro has been pursuing the music of European Jews with the single-mindedness of Inspector Javert. Image by Wikimedia Commons

‘We lament the loss of the treasures of the library at Alexandria, and the great step back in knowledge it entailed. The same thing will happen if we lose the music of the concentration camps. It’s an imaginary library that may never materialize.”

Walking the narrow streets of the decaying industrial city of Barletta in southern Italy, Francesco Lotoro’s remark was more a sigh than it was a warning. Lotoro is the subject of a book recently published in France: Thomas Saintourens’s “Le Maestro: A la Recherche de la Musique des Camps” (Stock, 2012). The title and subject play with Marcel Proust’s “A la Recherche du Temps Perdu.” Like Proust, Lotoro is engaged in the impossible imperative to recall and re-create, as fully as possibly, what once was.

In the case of Lotoro, though, it is not a madeleine that mediates the past. Instead, it is the crabbed notes scrawled on toilet paper. And they convey him not to the world of fin-de-siècle France, but instead to the end of the world represented by Auschwitz.

His father a tailor, his mother a seamstress, Francesco Lotoro showed great musical promise as a child. Enrolled in the local conservatory, he seemed bound for a career as a pianist. Yet destiny veered in a very different direction when Lotoro, on a classmate’s advice, transferred to the Franz Liszt Academy of Music, in Budapest. He found more demanding teachers there than he had in somnolent southern Italy, but he also discovered the music of Viktor Ullmann and Gideon Klein, two Jewish composers who died in Auschwitz.

Upon returning to Barletta, Lotoro buried himself in the 12 volumes of the magisterial DEUMM, the Italian encyclopedia of music. As he read the biographical entries, two names kept returning: Auschwitz and Theresienstadt, the “model” Jewish ghetto near Prague that served as a transit camp to Auschwitz. While his fascination with these places deepened, so, too, did his understanding of his own family. Like the several generations of Lotoros before him, Francesco was raised as a Catholic. But he then learned from his grandfather that the family’s roots were, in fact, Jewish: His ancestors were Spanish marranos, “hidden Jews,” who arrived in Italy in the 16th century.

From the collision of these experiences burst an epiphany, one that propelled him to devote his life to a vast and mostly solitary salvage operation: tracking down, transcribing and performing all the music written in the concentration and death camps.

Music from the Holocaust was, until recently, a subject mostly sheathed in scholarly silence: a few monographs, a handful of articles, a smattering of conferences. But there have been a number of recordings. Several of these predate Lotoro’s revelation, but Saintourens tends to downplay them, leading to the misleading impression of Lotoro as the one individual standing between oblivion and remembrance for this music.

And yet, while we admire Anne-Sofie von Otter and the Hawthorne String Quartet, celebrated musicians who have recorded music from the death camps, we also know that their professional lives — indeed, their lives tout court — do not balance on these works. This, though, is the case with Lotoro. His life is entirely given over to recovering the lives and creations of those musicians who lived and died in these camps. He has produced works by such well-known composers as Hans Krasa, creator of the Czech masterpiece “Brundibar,” and the hallucinatory opera “Kaiser von Atlantis” by Ullman, completed just days before he and his wife were delivered to Auschwitz from Theresienstadt.

More important, perhaps, Lotoro unearths compositions of the obscure, such as Josef Kropinski. A violinist and Polish resistance fighter imprisoned at Buchenwald, Kropinski wrote his works at night in the “pathology” department, surrounded by mutilated cadavers of fellow prisoners. Though he survived the camp, Kropinski never again composed a note of music; dead from a heart attack in 1970, he did not live long enough to hear his compositions performed by Lotoro and his group of collaborators. (Lotoro’s friends and colleagues, who mostly work pro bono, have attached themselves to the Istituto Musica Concentrazionaria. The director of the IMC is Lotoro; the president is his wife, Grazia Lotoro, and their office is their one-bedroom apartment, crammed with musical scores and documents, on the via dell’Industria in Barletta.)

Lotoro is, in effect, an originalist. He scorns adaptations of these compositions, and pursues the original texts with the single-mindedness of Inspector Javert. This obsession pushes him to lay siege to the Kafkaesque labyrinth of Prague’s archives, demanding to see firsthand the works written by the Czech composer Rudolf Karel, imprisoned at Pankrác. Scrawled on sheets of toilet paper were the names of many of Karel’s compositions that did not survive the war: Desperately ill, Karel was forced to cleanse himself with the sheets. It also drives Lotoro to track down the melody for the song “Stella del Porto,” whose lyrics the Italian Jewish Italian boxer Lazzaro Anticoli wrote on the wall of his prison cell. After several dead ends, Lotoro finally discovered an old woman living in the shadow of the former prison who recalled the song. With a frail voice, she sang it four times over the telephone, while Lotoro, at the other end, frantically transcribed the melody by hand.

Tellingly, “Schindler’s List” is among Lotoro’s favorite movies. There is a striking parallel between Oskar Schindler and Lotoro: One is afflicted by the obsession to save Jewish lives, the other by the obsession to save the music of European Jewry (as well as the music of gentiles caught in the Nazi machinery of death). This affliction was, of course, a gift to those saved. But it remains a mystery to those of us who approach it from the outside. Saintourens’s account reminds us of the fundamental opacity of obsession — at least if one is not an obsessive personality. As Virginia Woolf observed, all extremes of feeling are allied with madness.

At times, the maestro does seem on the verge of madness, muttering over the passage of time, as irrefutable a fact as is the impossibility of saving and transcribing every scrap of music from the camps. Yet this is the goal he has set for himself. In a conversation with Saintourens, Lotoro declares: “The camp took away your freedom but paradoxically made you free as a Jew. It was no longer a limit, but a resource. It’s like the walls of a prison: If you keep running from one to the other, you run a marathon.”

In a sense, Lotoro’s monumental task has freed him, too. As he runs from one archive to another, one informant to the next, bouncing from dead ends to chase new clues, all the while ignoring every earthly pleasure in this mad race, Lotoro is running a marathon. And it must be liberating. At a certain point, he insists that people are wrong to imagine there’s only pain and darkness in these musical compositions. Instead, most of the composers “free themselves of their imprisonment: This is the musician’s great power.” At the very least, Lotoro’s life stands witness to this disturbing truth.

Robert Zaretsky teaches in the Honors College, University of Houston, and is the author of the forthcoming “A Life Worth Living: Albert Camus and the Quest for Meaning” (Belknap Press).

Francesco Lotoro’s Mission To Save the Music of European Jews