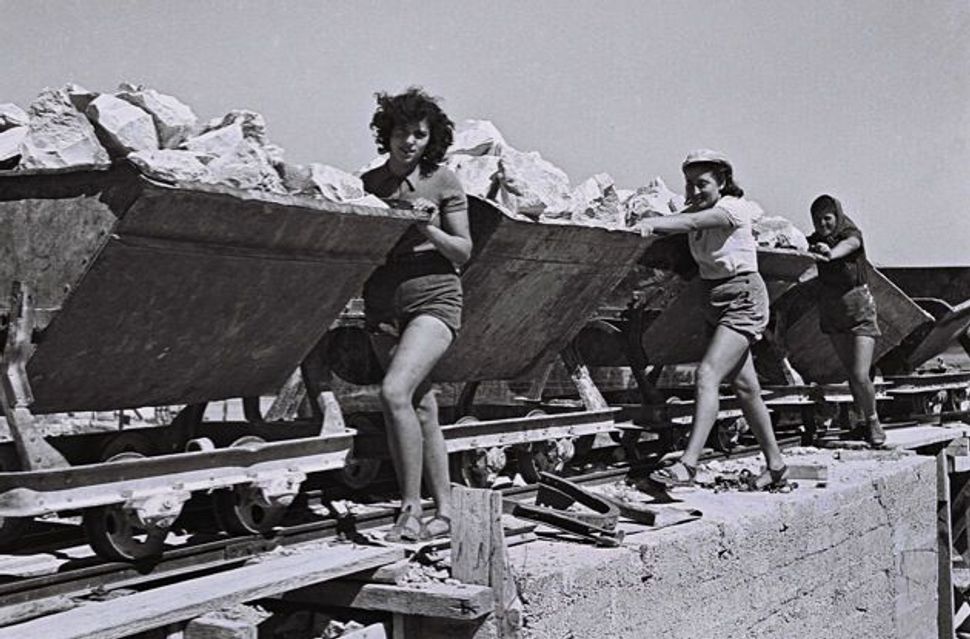 75 Years Ago: Zionists work in the quarry at Kibbutz Ein Harod in British Mandate Palestine. Image by Zoltan Kluger/GPO via Getty Images

After Moses and Rachel Blum moved to New York from San Francisco, they ended up with nothing. They decided to return to San Francisco, but because they couldn’t even afford the expense of their one child, 3-year-old Hannah, they left her with a neighbor, Jen Cohen, to whom they promised to send $2.50 a week for Hannah’s care. Cohen never received any money from the Blums, and with 10 children of her own, she couldn’t afford to take care of the little girl, so she sold Hannah to a childless couple in Brooklyn by the name of Mr. and Mrs. Deuel for $50. In the meantime, the Blums found jobs in San Francisco and sent $33 to relatives to give to Cohen for taking care of Hannah. But when the relatives delivered the money, Cohen informed them that she’d sold the child to the Deuels and didn’t have their address. The Blum’s relatives were mortified and quickly secured the services of an attorney, who found the Deuels and initiated a suit to return Hannah to her parents.

In an editorial, the liberal British newspaper The Manchester Guardian writes: “The creation of a Jewish national home must be seen through as demands England’s honor and duty as the ruling mandate power. It would be necessary even if the Jews weren’t being hounded out of Central and Eastern Europe…. There will be no freedom in Palestine as long as the government does not take action and as long as terrorists remain convinced that they will win.” The Guardian praised the spirit of the Jewish pioneers in Palestine and claimed that there are other countries that take the side of the Jews. The editorial also suggested that the United States pressure England to open the doors to Palestine so that Jewish refugees from Germany and Austria could immigrate there.

Two members of a marrano, or “secret Jew,” community from the Majorca Island in Spain underwent a unique double circumcision ceremony at a hospital in Ramat Gan Israel after both completed ceremonies of conversion to Judaism. It was the first father-and-son circumcision ceremony in Israeli history. The participants were 48-year-old Daniel Belshazar Crispi and his 18-year-old son, Raphael Crispi, both of whom came to Israel from Palma de Mallorca to study Judaism at a yeshiva in B’nai Brak. They intend to return to Mallorca and to bring the rest of their community to Israel to undergo similar conversion ceremonies. “We are happy to return to Judaism,” they said, “after many generations during which our fathers and forefathers lived as marranos.”