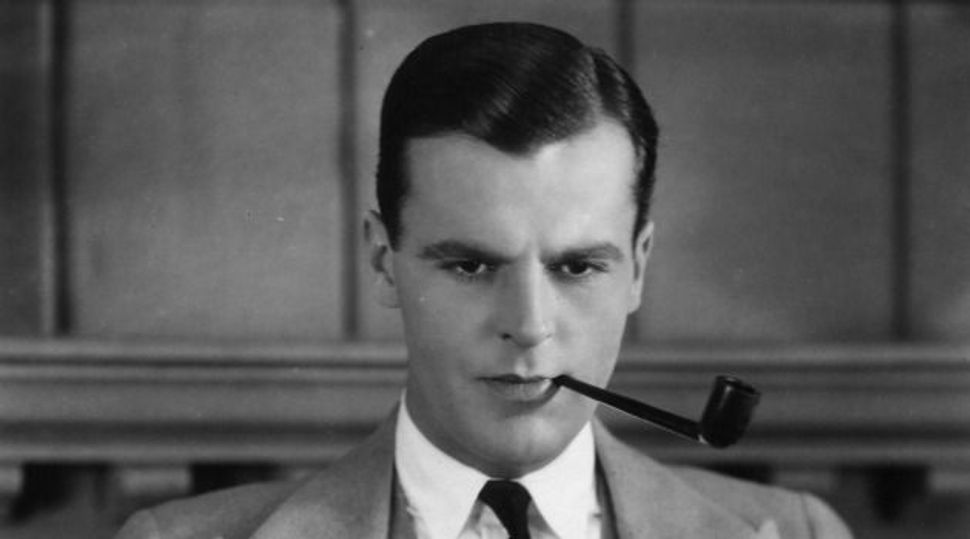 Pipe Dreamer: The first film version of ?Great Gatsby? featured Neil Hamilton in the role of Nick Carraway. The silent movie was made by the Jewish production team of Adolph Zukor and Jesse L. Lasky. Image by Getty Images

Every generation gets the film version of “The Great Gatsby” it deserves. Ours will be a 3-D “Gatsby” directed by Baz Luhrmann — he of the hyperactive, swooping camera of “Moulin Rouge!” and the highly stylized, gaudy adaptation of “Romeo + Juliet.” But like every previous “Gatsby” adaptation, this one will speak with just the hint of a Jewish accent.

In 1926, just a year after the publication of F. Scott Fitzgerald’s novel, the Jewish-owned Paramount Pictures released a now lost silent film made by the Jewish production team of Adolph Zukor and Jesse L. Lasky at the Famous Players Lasky Corporation.

Paramount did it again in 1949, with Alan Ladd in the title role, featuring the ubiquitous Shelley Winters (born Shirley Schrift) in the role of Myrtle Wilson.

The 1974 film version, once again released by Paramount, is generally considered to have been a noble failure. Francis Ford Coppola’s screenplay is loyal to Fitzgerald’s novel, perhaps to a fault. Robert Redford, in the enigmatic title role, is a compelling visual presence, but he and Mia Farrow, who plays his elusive dream girl, Daisy Buchanan, failed to ignite any onscreen sparks.

Incidentally, Farrow’s movie director father, John Farrow, had been slated initially to direct the 1949 version; it was handed over to Elliott Nugent by producer/screenwriter Richard Maibaum of James Bond fame after a disagreement over casting.

Like those before him, Luhrmann needed to decide how to portray the minor but essential character of Meyer Wolfsheim, the Jewish gangster and bootlegger who is Gatsby’s mentor, the Svengali figure responsible for the transformation of the modest Midwestern ex-soldier James Gatz into the wealthy, reclusive socialite Jay Gatsby of West Egg, Long Island, on his way toward trying to win back the heart of his beloved Daisy (played this time by Carey Mulligan).

The 1974 version watered down some of the more vulgar, offensive stereotypical aspects that Fitzgerald gave Wolfsheim. As played by Howard Da Silva (born Howard Silverblatt), Wolfsheim — loosely based on the real-life Arnold Rothstein, who is familiar to viewers of HBO’s “Boardwalk Empire” and is the man generally credited with having fixed the 1919 World Series (a feat Fitzgerald gives to the fictional Wolfsheim) — doesn’t have a thick Yiddish accent that renders the word “connections” as “gonnegtions.”

And Da Silva doesn’t sport conspicuously hairy nostrils that “luxuriated” out of a “flat nose,” although hae does flaunt the strange cufflinks made out of human molars.

Luhrmann has raised eyebrows by casting Bollywood star Amitabh Bachchan as Wolfsheim. The new film also stars Isla Fisher as Tom Buchanan’s mistress, Myrtle Wilson (played by Karen Black in the 1974 version). In real life, Fisher is married to Sacha Baron Cohen, and underwent a rigorous course of study to convert to Judaism before the two wed.

But here’s the perennial question at the heart of “The Great Gatsby” that Luhrmann, like all the others before him, attempts to address: Who is the real Jay Gatsby? Fitzgerald left only a few clues. We learn at the end of the book that he was born James Gatz and grew up in a hardscrabble town in North Dakota, the son of Henry C. Gatz, whom we meet briefly at the end of the novel.

We know that he had a short flirtation or relationship with Daisy before heading off to war, and that when he returned he set about to reinvent himself in a style and fashion more suited to her wealthy, socialite background.

It has been variously speculated that the real reason James Gatz and Daisy Buchanan didn’t consummate their relationship initially was that James harbored an even deeper secret than that of merely being from a relatively impoverished background: namely, that he was black, Jewish or gay.

Critics have found enough hints in Fitzgerald’s text to justify any of those readings, but so far, the filmmakers who cast Ladd, Redford and now German-Italian-American actor Leonardo DiCaprio (reportedly a practitioner of Krav Maga, an Israeli martial arts form, and former longtime boyfriend of the Israeli supermodel Bar Refaeli) haven’t seen fit to go down any of those roads.

There is, however, another highly speculative theory that has been bandied about. In the novel, Gatsby winds up taking the heat for Daisy in what amounts to the ultimate sacrifice. If Daisy represents humanity, Gatsby can be said to have died for her and her sins (literally and figuratively).

Which of course would make him Jesus. Adding fuel to the Gatsby-as-Jesus theory, his chosen name could be written as “J. Gatsby,” which by merely changing the “t” into a “d” (especially simple to do if you have a Yiddish accent) could easily be read as “J, Gad’s By,” — not too far a stretch from “Jesus, God’s Boy.”

Of course, if Gatsby is Jesus, then the title character would indeed be Jewish. And once again, a Jew in a movie would be played by an Italian.

Seth Rogovoy has revealed the hidden Jewish stories of Alfred Hitchcock, James Bond, David Bowie and “The Hobbit” in these pages.