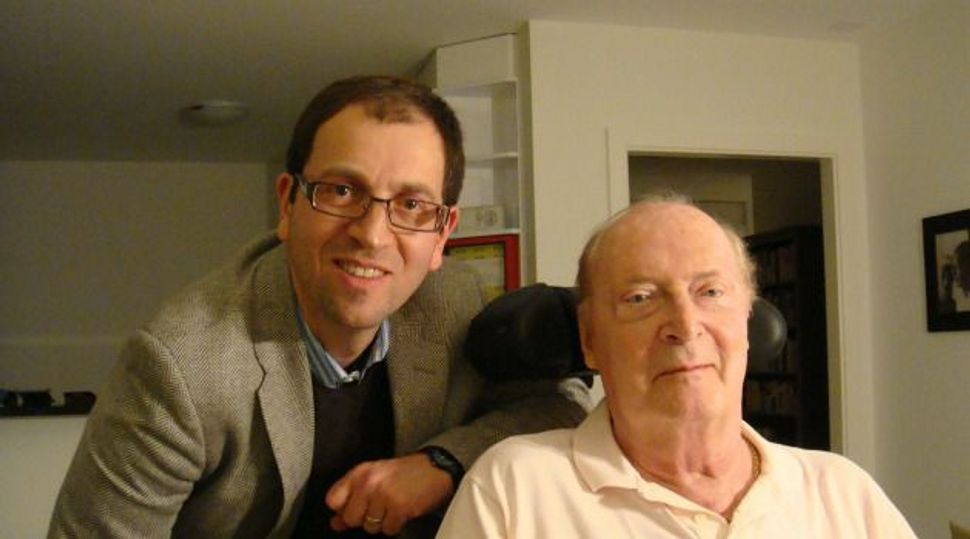 Dmitri Nabokov, the only child of Vladimir Nabokov and Véra Nabokov (nee Slonim), died 22 February, 2012, in Vevey, Switzerland, at the age of 77. Dmitri Nabokov was a person of many gifts and was one of the most dedicated Jewish sons I have ever encountered.

In responding to his parents’ critics — or to what he perceived as transgressions against his parents’ will and vision — he was sometimes intemperate, perhaps tyrannical. But his counterattacks and pre-emptive strikes were almost always elegant and witty. He reacted with a special vehemence to misreadings of his parents’ legacy by Russian chauvinists.

When it came to reflecting on crucial aspects of his father’s art, Dmitri Nabokov the critic, translator and interpreter usually got it right.

In December 2011, I traveled to Crimea to conduct research on the mass executions of Jews in November and December 1941. On the way there I visited Dmitri in Montreux, Switzerland. I had been corresponding with him since 1994 and had previously visited him. This December evening was different because we spoke mostly about various Jewish and Judaic questions and intersections in his parents’ lives — and in his own. The gallery of Jewish characters in Vladimir Nabokov’s fiction had been a subject of my perennial fascination. I was very keen to talk at length about this topic to his son. The conversation — our last one, as destiny had it — was not a formal interview but rather the beginning of a projected series of conversations.

Clad in shorts and a polo shirt, Dmitri Nabokov exuded energy and determination. He towered over the objects in the sitting room. An iPad, which I used to record the conversation, had to be propped up by a dozen thick tomes to be the same height as his shoulders and head.

“How do you feel [your mother] was Jewish? What was Jewish for her?” I asked him.

“To the extent that she could answer lots of question,” he said. “To the extent that she knew all kinds of civic and historical and social things that not everybody, not even all Jews, know. That was because she was a very cultured person who went beneath the surface of many things. [Jewishness] was never a social concern and never a social discomfort. On the contrary, I could ask her all kinds of things that only a cultured Jewish person would know, even though she was never a professional Jew.”

“[My father] very much shared his own father’s very strong opposition to anti-Semitism, was close to Jewish culture in many ways — not typical for a young Russian man [of his time and milieu],” Dmitri Nabokov observed.

“In my work,” I said, “I [had] argued that your father had developed an interest in Jewish things, and even in Judaic philosophy, before he met your mother [in 1923 in Berlin], except it’s hard to prove.”

“I can substantiate it,” Dmitri replied weightily. “Very much so.”

“I’m interested in knowing whether your parents ever talked to you about religion,” I said.

“We never had that problem, and neither did I,” he said. “For example — off the track, but it’s an example — it is very common in America for young singers who are studying to sing in a church choir. Singing in a small choir in a good church with a good director is a very useful musical education. I sang on Fridays and I think on Saturdays at a wonderful… would it be Reform synagogue… in Boston. And we sang stuff like some of the most difficult in modern religious music by [Ernst] Bloch. So yes, it was never much of a problem. These were Jews, but they were Jews who had grown up within a cultured atmosphere; therefore the various trimmings of liturgy become more or less absorbed by a child. I know my mother knew a lot of these things. She knew much more than I, of course, but I could ask her certain details, meanings of certain words, meanings of certain similes.”

I queried that one gets “the sense that it was important for your mother that you understand that she is Jewish and know exactly what it is.”

“Yes, probably it’s something that a young American boy, whether he is Jewish or not, when he goes to school he has to understand the whole mystique aspect of life in America, which is not devoid of prejudice,” Dmitri Nabokov replied. “My mother was very clear about all of these things. She explained about the degree to which I should think about this in my own life. She knew it would never be a problem for me. I’m big; I’m strong; I don’t let offenses go by easily, not that I had many.”

I asked if he had had any “spiritual upbringing or religious instruction.”

“Yes,” he said. “As is the case in English-speaking countries, particularly America and England, there is a certain religious wing over the school, often Protestant. It’s there more as a tradition [in private schools like St. Mark’s which Dmitri attended]. And some of the most enjoyable stuff I did at the schools was singing in Handel’s ‘Messiah,’ [Bach’s] B Minor Mass, things like that. I greatly enjoyed this. And that created a certain contact with Jewish culture, reading certain things that were suggested to us, to better understand what the references are, what events occurred, what is the true meaning of certain biblical narratives. And my mother asked me if I wanted to go to Sunday school [at the church in Cambridge, Mass., where he sang in choir]. I’m sure I answered ‘yes,’ because I went. I had friends there, and I had a good time, and I loved music.”

Dmitri Nabokov was born in Berlin in 1934 and fled Germany with his mother in the spring of 1937, spending three more years in France and coming to America on board a ship chartered by the Hebrew Immigrant Aid Society. Reflections on the Shoah and vestiges of anti-Semitism in the America of his childhood and teen years entered our conversation.

Referring to his father’s story “Conversation Piece, 1945,” and its fictionalized Cambridge-based soirée of bigots, I asked him about the Nabokovs’ first American decade. He recalled how, in planning their cross-country trips, he and his parents “were always both annoyed and amused” by an ad in The New Yorker for a “more or less pretentious hotel” that would say “‘churches nearby’ — a classic phrase.”

Like most of Vladimir Nabokov’s students, I had read about his dismay at hotel signs like “Gentile clientele only,” as I was also aware of a certain “polite prejudice” toward Jews in the academic and literary environment. I wanted to know whether Dmitri felt prejudice at St. Mark’s School or elsewhere. “Even in my age group at school,” he recalled, “somebody [was] saying, ‘Your mother is a Jew….’ It was not done in any greatly offensive style, but it was mentioned as if it were a negative point.”

“So did you fight?” I asked, remembering my own school years in the Soviet Union.

“No,” Dmitri replied, chuckling. “He didn’t say, ‘She’s a Jewish pig’ — nothing like that. But that word sort of floated by. It wasn’t strong enough an offense. I’ve fought on other occasions. That wasn’t one of them.”

He looked so much like both of his parents — so Russian and so Jewish. His voice grew especially tender when he remembered his mother. As dusk entered the room through the French doors, I asked him about Zinaida Shakhovskaya, an émigré author and a close acquaintance of Vladimir Nabokov in the 1930s. In postwar decades, Shakhovskaya spoke of Dmitri’s father’s talent “withering” under his mother’s Jewish influence.

“I’d say the exact opposite is true,” replied Dmitri Nabokov. “My mother did more for my father as a person and a writer than anyone else in the world could have.”

Maxim D. Shrayer’s books include “Yom Kippur in Amsterdam” (Syracuse University Press, 2009) and “I Saw It: Ilya Selvinsky and the Legacy of Bearing Witness to the Shoah” (Academic Studies Press).