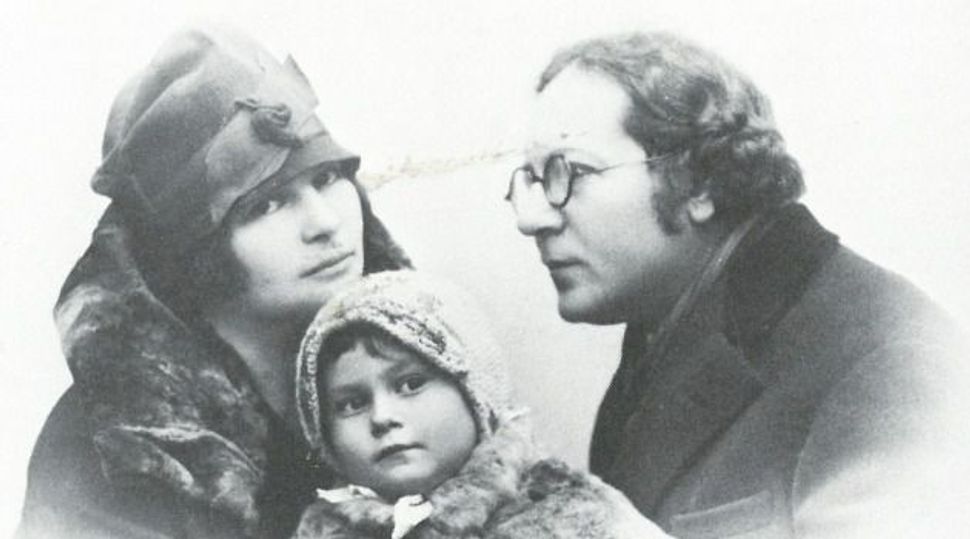 Forward Into The Past: Images of Jewish life before the Holocaust taken by photographers such as Alter Kacyzne (pictured above with his family) were shown as part of ?Image Before My Eyes,? a 1976 exhibit at the Jewish Museum in New York. Image by Courtesy of The Jewish Museum In New York

We don’t often think of ideas and concepts as having a biography or, better yet, a pedigree or yikhes. But like people, they also partake of the life cycle: Ideas, too, come from somewhere before going out on their own. And so it is with the Museum of the History of Polish Jews, which recently made its much anticipated debut in Warsaw, and the United States Holocaust Memorial Museum, which celebrates its 20th anniversary in Washington, D.C., this year.

Both institutions and the perspectives they bring to bear owe a great deal to “Image Before My Eyes: A Photographic History of Jewish Life in Poland Before the Holocaust,” which first took the form of an exhibition at The Jewish Museum in New York in 1976, then became an illustrated book a year later and ultimately a film that premiered in 1981.

A multi-media phenomenon avant la lettre, “Image” was created by a remarkable trio of talents: Lucjan Dobroszycki of the YIVO Institute for Jewish Research, in New York, who, before his untimely demise in 1995, went on to publish “The Chronicle of the Lodz Ghetto, 1941–1944,” a landmark text in Holocaust studies; Barbara Kirshenblatt-Gimblett, the New York University ethnographer and museologist who is responsible for the core exhibition of the Museum of the History of Polish Jews, and Joshua Waletzky, a celebrated documentary filmmaker whose oeuvre encompasses “The Partisans of Vilna” and “Music for the Movies: Bernard Herrmann.”

The enterprise, which The New York Times described as a “commemorative mosaic,” drew on the thousands of photographs that had been assiduously collected and preserved by YIVO ever since the 1940s. Some of the images came from the studios of polished professionals such as Roman Vishniac and Alter Kacyzne; others were the handiwork of amateur, homegrown shutterbugs.

Taken together, the photographic material enlarged, complicated and unsettled American Jewry’s relationship to its Eastern European past. At a time when that relationship took its cue from “Fiddler on the Roof,” “Image” offered a counter-narrative rooted in history rather than in sentiment.

Here, Jews came in multiples instead of in stereotypes: women in smartly styled flapper dresses, and their female counterparts in dowdy babushkas; dapper men in bowler hats, and bespectacled yeshiva bokherim in peaked caps; a blacksmith who glared at the camera, and a young actress who flirted with it; a shabes-klaper ( someone who tapped at the wooden shutters of villagers’ homes to alert them to the imminent arrival of the Sabbath) and a group of spirited young men piled into a car. Modern Jewish life in all its bewildering and invigorating heterogeneity is ours to behold.

Also on view are the elongated forms of wooden synagogues in the Polish hinterland, and the heavily columned, imposing exteriors of urban synagogues; broad boulevards, muddy lanes and crooked streets, as well as the carts and wagons, bicycles and motorcycles that traversed them. Anything but static, timeless and unchanging, the world that unspools before our eyes is as robust, lively and febrile as our own.

Photography holds the key to each of the three iterations in “Image.” Offering an internal, personal and at times decidedly casual perspective in lieu of one imposed from above or fashioned on Broadway, the snapshots and studio portraits, cartes de visite and family albums that figured so prominently in the exhibition, book and film were nothing short of revelatory.

They summoned into being an entire world, bringing its varied inhabitants sharply into focus. It’s not for nothing that Kirshenblatt-Gimblett called these photographs “visual eyewitness accounts,” or, for that matter, that some of the most powerful of subsequent Holocaust displays — the memorial to the Jews of Eishyshok at the United States Holocaust Memorial Museum comes vividly to mind — are quite literally a towering display of images of people doing what people do, going about the daily business of life.

The contemporary viewer looks for shadows and premonitions. But the individuals, couples and families captured in these frames are in the moment. Their ordinariness pierces the heart.

In the years since “Image” first saw the light of day, all kinds of advances have been made — in technology, scholarship, the protocols of museology — whose cumulative impact renders this project somewhat dated.

We’ve grown accustomed to such a high degree of intellectual and visual sophistication that the book especially may strike the contemporary reader as static and stilted, even a bit rough around the edges. What’s more, the steady proliferation of museums, publications, exhibitions, films and college courses on Eastern European Jewish life and on the Holocaust has tended to crowd out and ultimately eclipse “Image,” pushing it to the margins of our consciousness.

But right now, as we mark the anniversary of the United States Holocaust Memorial Museum and celebrate the birth of the Museum of the History of Polish Jews, we’d do well to acknowledge the generative role played by “Image” in opening our eyes to, and unclouding our vision of, the prewar Jewish experience.