How Do You Say ‘Fuhgeddaboudit’ in Yiddish? 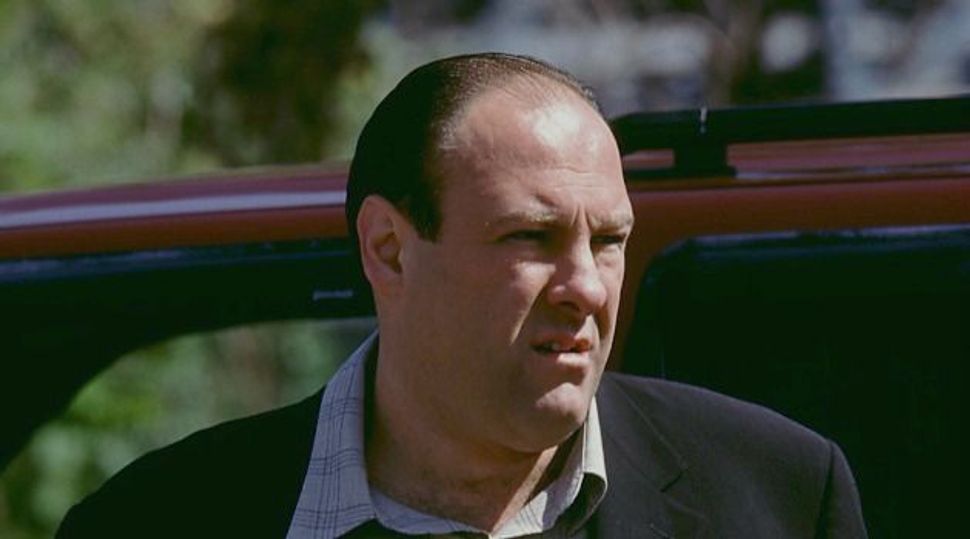 Language Mobster: James Gandolfini helped to popularize ?Fuhgeddaboudit? on ?The Sopranos,? but the phrase may be more common in Hollywood than in real life. Image by Getty Images

‘What’s Fuhgeddaboudit in Yiddish?” The Wall Street Journal’s Brett Stephens asks in a column in which he concludes that, following President Obama’s Syrian chemical weapons shuffle, the president’s promise to keep Iran from obtaining a nuclear weapon has lost its credibility.

Was Stephens suggesting that “Fuhgeddaboudit” is an English version of an original Yiddish expression? Or was he simply trying to say that the unreliability of the presidential pledge must be of special concern to Jews?

Probably the latter, because “Fuhgeddaboudit” has no Yiddish antecedents to speak of. Although the expression, as the look and sound of it indicate, almost certainly originated in New York, and most probably in Brooklyn, it did so, apparently, among Italian Americans, not Jews.

One says “apparently” because Italian and its many dialects — like Sicilian, which was commonly spoken by Italian immigrants to New York — do not seem to have a parallel idiom, either, and because it is difficult to trace “Fuhgeddaboudit” to Italian immigrant culture.

In fact, it is difficult to trace it any further back than Joseph Pistone’s 1988 book about being an FBI agent in the underworld, “Donnie Brasco: My Undercover Life in the Mafia,” and its 1997 film adaptation. “Fuhgeddaboudit” occurs frequently in both book and film, and Johnny Depp, the actor who plays Pistone, actually gives a speech about it to a puzzled FBI co-worker.

Of course, “Forget about it,” without its heavy New York accent, has always been a perfectly normal variant of “Forget it.” Yet “Fuhgeddaboudit” is not “Forget about it.” Apart from its dropped “r” and [voiced “d’s,”] it has a more strongly stressed second syllable, generally comes with an exclamation point and has, as Johnny Depp points out, a wider range of meanings, which include, “It’s so great that there’s no point trying to describe it to you” and “You’re so dumb that there’s no point in trying to explain it to you.” You still don’t see the difference? Fuhgeddaboudit!

Was “Fuhgeddaboudit” actually a common Brooklyn or mafia expression before it was popularized by the film?

The Internet linguistic blogger Ben Trawick-Smith is skeptical. Few of his Italian American informants remember it as such, and many don’t remember it at all. Sometimes, he writes, phrases become so identified with certain places and populations that they come to epitomize these in the popular mind, even though this may have no basis in reality. “Fuhgeddaboudit” may be such a case, a Hollywood-disseminated expression assumed to characterize Italian American speech by only those who know little about it.

But let’s get back to Bret Stephens’s question: How does one say “Fuhgeddaboudit” in Yiddish?

One would have to improvise. “Fuhgeddaboudit” in the sense of “There’s no possible way” might be conveyed by a nekhtiger tog, a “fat chance.” For “Fuhgeddaboudit” meaning “I can’t possibly do it justice,” one could try nisht keyn verter, “[There are] No words [for it].” And for a dark horse, you might want to check out the distinguished Yiddish linguist Uriel Weinreich’s suggestion of meyle in his Modern English-Yiddish Yiddish-English Dictionary.

Weinreich doesn’t, it is true, offer meyle (pronounced “MAY-leh”) for “Fuhgeddaboudit,” which had no currency in 1968, the year his dictionary was published. He does, however, under the English verb “forget,” give meyle as a translation of the exclamatory “Forget it!” — which is about as close to “Fuhgeddaboudit” as one could get in pre-Fuhgeddaboudit days. Since meyle is a Yiddish word that is almost never uttered exclamatorily, and is most often let drop in a tone of quiet resignation, this may seem a surprising choice.

If anything, meyle is even harder to translate into English than “fuhgeddaboudit” is into Yiddish. It can, depending on the context, mean “Don’t worry about it,” “If you say so,” “It could be worse,” “I’m not going to comment on that” and various other things. Perhaps the best way to demonstrate some of its uses is by giving a few hypothetical examples.

Wife: “I know you wanted to watch the football game today, dear, but the Goldbergs are coming for tea.”

Translation: “And if I say I don’t want tea, that will help any?”

Chaim: “I think Mendl is a highly intelligent fellow.”

Grandfather: “I hear our granddaughter is dating a Jewish taxi driver.”

Translation: “It could have been a non-Jewish taxi driver.”

With all due respect to Uriel Weinreich, this is not quite the same as “Forget it,” let alone “Fuhgeddaboudit.” The difference is emotional as well as semantic. “Fuhgeddaboudit” can express excitement, impatience or annoyance, but there’s always an aggressiveness about it; meyle is passively accepting, though sometimes slyly so.

Translation: “If God doesn’t want Iran to get the bomb, He’s got other ways of seeing to it.”

Though this is a language column, some of the language used in the video shown here may be considered by to be inappropriate. Viewer discretion advised.

How Do You Say ‘Fuhgeddaboudit’ in Yiddish?