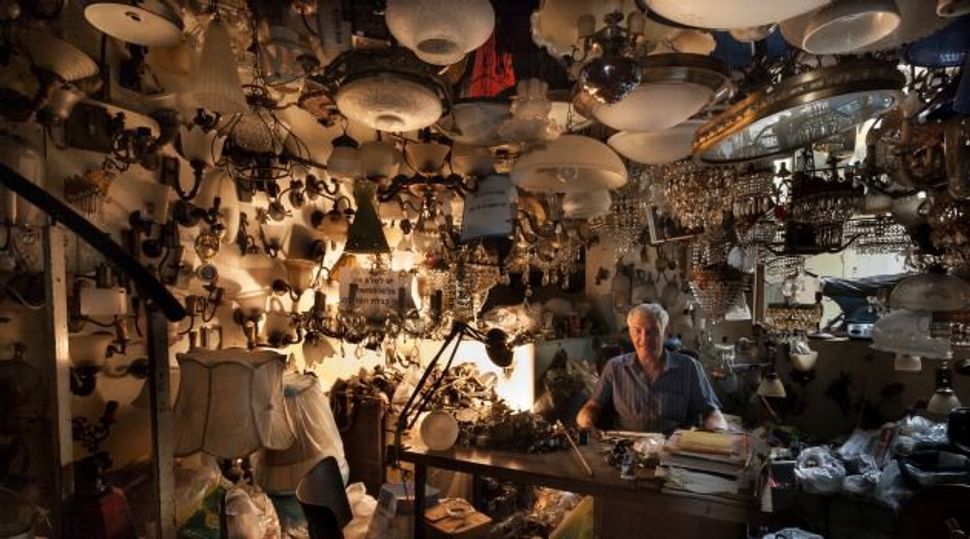 One morning a week, Assi Haim roams the streets of the old neighborhoods of Tel Aviv with his camera and tripod. He’s racing against time, trying to document a piece of history before it disappears. Haim is searching for “The Rebels,” the elderly owners of small shops who refuse to bow to the crushing winds of global capitalism that have brought chain stores and cheap foreign imports to Israel.

What started out as a project for a photography class back in 2010 has turned into a personal passion for Haim. The 41-year-old journalist, an editor at Israel Hayom, has begun to expand his efforts, making special trips to Haifa, Jerusalem, Netanya, Beersheba and towns in the Galilee to seek out remaining mom-and-pop shops. He posts his photographs, along with short write-ups about the establishments, their histories and their owners, on a blog called “HaMordim,” Hebrew for “The Rebels.”

“These are old people who are rebels against capitalism,” Haim said. “They do no marketing, don’t know from new trends, and don’t worry about decoration and window dressing.”

Indeed, it was the chipped green Formica that drew Haim into the first place he photographed. It was the Yeshurun Restaurant at 4 Mazeh Street in Tel Aviv, a small establishment opened in 1962 by Zusha Rivkin, who was 84 by the time Haim met him. It was once a bustling place, with waiters circulating among the tables out front. But in 2010, when the photographer arrived, it was only Rivkin, with his long white beard and black yarmulke, and one longtime and loyal assistant, making the fish and meat patties, vegetable dishes, schnitzel and salads, and serving it all to lunchtime customers.

Take a tour of Assi Haim’s Tel Aviv photography project in the slideshow below:

“There at the corner of Allenby Street, at one of the busiest intersections of Tel Aviv, hides a time machine that takes anyone who enters it into another era. All you need to do is open the Jewish restaurant’s door to fly backwards 50 years to times when green Formica was the height of fashion and simple Jewish food was all that was needed to satisfy your hunger,” Haim writes on his blog.

A little more than a year after Haim first visited Rivkin at his restaurant, the elderly proprietor passed away. The advanced ages of most of the shop owners gives Haim a sense of urgency. “I need to document them before they’re gone,” he said.

He recalled how he had tried over and over to catch the owner of a lighting store on Ben Yehuda Street during the limited and varying hours the shop was open, but to no avail. The final time the photographer came by, the shop had been closed for good.

Haim has found that it is not unusual for elderly business owners to die shortly after closing their shops. “The stores keep them alive,” he said. With most of these people not making enough from their businesses to live on (they are likely making do on social insurance pensions, and perhaps savings), it’s more a matter of having somewhere to go every day.

“Some people think of it as sad,” Haim said of what people see in his photos. “But I see the project as optimistic. I’d like to be like them when I’m in my 80s. They are not in the rat race, and they respect their professions and their stores.”

While some of his subjects accept their situation, others are somewhat bitter about the devastating competition from big chain stores. But they all demonstrate a strong resolve to keep doing what they have always done. For instance, Miriam Givoni who, in her 80s, keeps open her kol-bo, a small general store, at 163 Ibn Gvirol Street, dating to 1956; the elderly Jersey brothers show up to work every day at their 69-year-old nut shop at 32 Yedidya Frankel Street, and Yehuda Yaakov, 78, who is still baking up a storm at his Albert Pastry Shop at 36 Matalon Street, which his father established in 1935 upon his arrival from Greece.

For Haim, it’s all about capturing these “rebels” in context. “These stores look the same way they did when they were first opened,” he said. Haim wants the viewer to notice the cracked vinyl seat, the outdated plastic Purim mask that has been hanging from the ceiling of the tiny school supply shop for who-knows-how-many years. “The furniture grows old with them,” he said.

Haim said that all the storeowners he has met have pointed to the import of inexpensive Chinese goods that began in the 1980s as the starting point of their own financial decline. One woman who sells high-end, handcrafted buttons made of natural materials from Europe lamented the arrival of plastic sewing notions and fashion accessories from Asia.

Eytan Sheshinski, an economics professor at the Hebrew University of Jerusalem, agreed that major changes in the Israeli economy began to be felt acutely in the 1980s, but he said the shift began earlier, in the wake of Six Day War. As early as the late 1960s, more and larger businesses sprang up, and the standard of living rose. More recently, Israel’s high-tech sector has brought in large amounts of international investment and moved Israel even further into the global economy.

“Israel is no different from other Western economies,” Sheshinski said. “Small businesses are struggling against chain stores all over the world.”

Unlike Haim, who believes he is in a race against time to document mom-and-pop shops, Sheshinski is not sure that these kinds of establishments will imminently disappear. “People want these neighborhood stores,” the economist said. “You won’t find the kind of products they sell in the big stores, and now it is even considered trendy to seek out the old and authentic. These stores can take advantage of this nostalgia.” Sheshinski himself likes to occasionally eat old-time Ashkenazi food at restaurants like those Haim is documenting.

Haim is keenly aware that he is not the only young Israeli with a sense of nostalgia for the Israel of his childhood. He has already published a book that looks back at the traditional food of the kibbutzim and hopes to publish a collection of his “HaMordim” photos.

In the meantime, he is trying to do his part in supporting these stalwarts by granting them attention and hopefully sending some business their way. He personally patronizes some of these shops, brings clothes he needs fixed to one of the tailors he has met, and he has become particularly friendly with octogenarians Yeshoshua and Rivka Ashkenazi, who operate a small sandwich place at 28 Yedidya Frankel Street, in Tel Aviv’s Floretin district.

“We shouldn’t let small businesses be ruined by globalized capitalism,” he said. “I’m not naive. I know how the world works. But change is not always for the best. Sometimes you just need that personal connection.”

Renee Ghert-Zand is a regular contributor to the Forward.