The Hank Greenberg Story That ’42’ Forgot 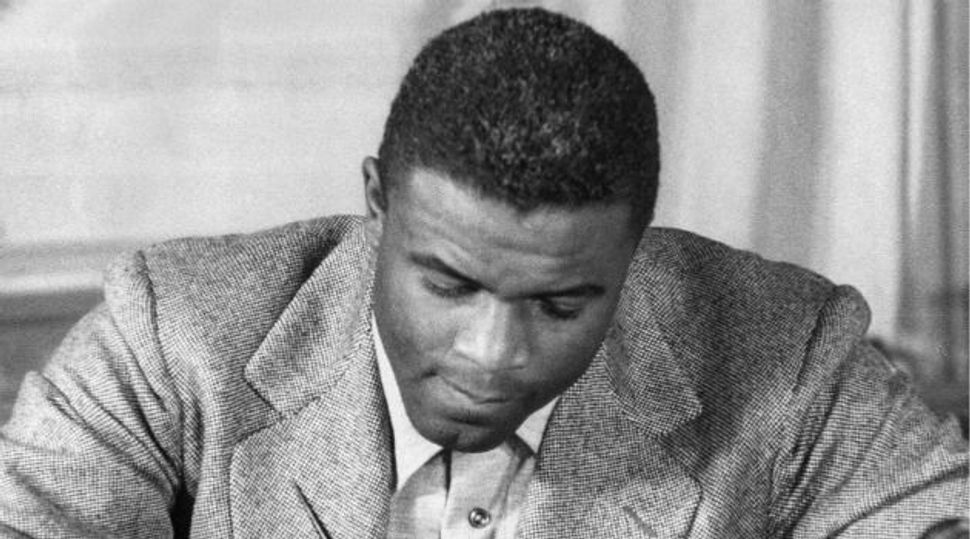 The Most Artful Dodger of Them All: Jackie Robinson collided with Hank Greenberg in the spring of 1947. Image by Getty Images

Anyone seeing “42” would be horrified at the hostility Jackie Robinson faced from his teammates and opposing players and catcalling from the stands when he integrated Major League Baseball.

What the film did not depict was the reported encounter Robinson had with the one baseball player who could best understand the prejudice the Civil Rights symbol encountered on the field in 1947.

That man was another first baseman, Jewish slugger Hammerin’ Hank Greenberg, playing for the Pittsburgh Pirates in the sunset year of his career. Greenberg had been unfairly released from the Detroit Tigers the year before even though his power had helped the team win four pennants and two World Series.

The two men met on the field on May 15th. According to sports columnist Ira Berkow “Greenberg was appalled by some of the things the players in his own dugout were hollering at Robinson.”

A little drama unfolded when Robinson hit a ball and collided with Greenberg running to first base. Greenberg went out of his way to help Robinson up and give him a pep talk. After the game, the reporters asked the rookie what Greenberg had said to him. Robinson asserted, ‘He gave me encouragement.”

This empathy was expressed because Greenberg understood Robinson’s struggles. “42” mentions in passing that Greenberg was subject to anti-Semitic slurs, but that was only the tip of the prejudice. Upon first entering the minor leagues in the 1930s,

Greenberg realized that most of his ballplayers were “country boys and had never had seen a Jew. I remember my teammate Jo-Jo White, when he saw me he couldn’t understand because he was always told that Jews had horns. And here I was, I looked like a normal human being, and he just couldn’t figure it out.”

Describing the years of catcalling Greenberg recalled, “It was a constant thing. There was always some leather lung in the stands that was getting on me and yelling at me.” Greenberg asserted that the hostility was “a spur to make me do better, because I could never fall asleep on the ball field.”

Some people think the anti-Semitism reached its height when Greenberg almost broke Babe Ruth’s homerun record in 1938. They claim he was pitched bad balls because players did not want a Jew to break Ruth’s record, but the Jewish Hall of Famer denied such claims. He answered the hatred by hitting the ball out of the park.

According to Greenberg’s son Stephen, former deputy commissioner of baseball under Faye Vincent, it came to a point that “every time he would hit a home run, he would feel doubly proud because he felt like he was hitting a home run against Hitler.”

Even after the war ended in 1945 and the Holocaust was exposed, Greenberg returned from four and half years in the military only to hear a slur. The Tigers avoided a tie for the pennant with the Washington Senators when the slugger powered a dramatic grand slam in the ninth inning of the last game of the season against the St. Louis Browns. Greenberg was pleased not only to help the Tigers win first place when he heard that one of the Senators players had said, “God damn that son of a bitch Jew bastard, he beat us again!”

And just like Robinson was a symbol of strength in the African American community Greenberg had a huge following in the Jewish community. The fans’ admiration for the 6’4” powerful Jewish player’s strength and courage bordered on worshipping; young girls wanted to marry him and young boys fantasized about hitting with such power. Senator Carl Levin claimed “We learned the lessons of democracy watching [Hank Greenberg].”

Although Greenberg clearly faced anti-Semitism for years he never put those experiences in the same league as Robinson. His son recalls Hank’s father telling him that “he didn’t know what having it bad was until he saw what Jackie Robinson went through.”

It’s not surprising that when Greenberg then made the transition to the front office in partnership with Bill Veeck they hired Larry Doby, the first player to integrate the American League. They continued on by hiring great black players like Satchel Paige and Luke Easter.

Like Robinson said back in 1947 after their encounter, “Mr. Greenberg is class – it stands out all over him.”

Aviva Kempner just released a new DVD of the Peabody winner The Life and Times of Hank Greenberg with over two hours of new extras. She is making a film on philanthropist Julius Rosenwald. New DVD available at hankgreenbergfilm.org

The Hank Greenberg Story That ’42’ Forgot