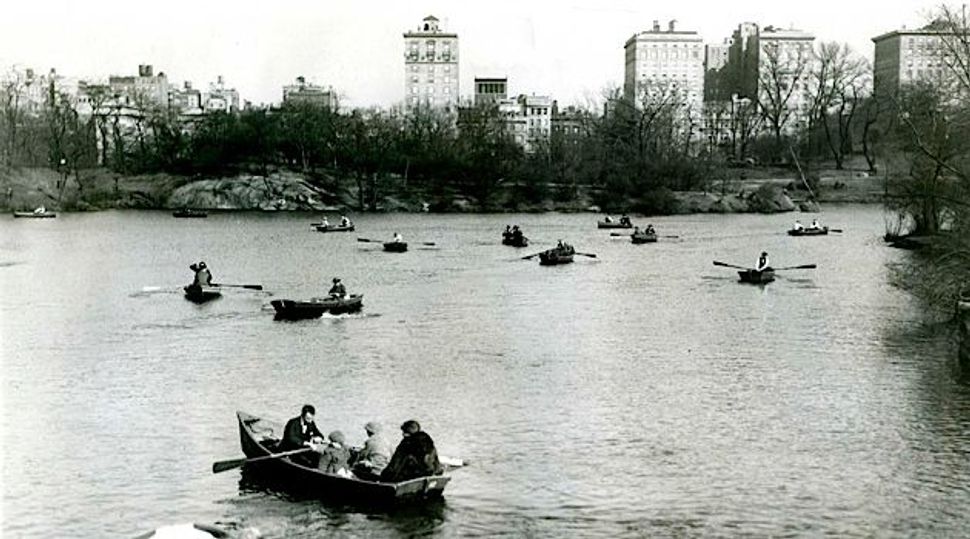 Spring in New York City: Oarsmen struggle to keep their boats in a straight line as they traverse a lake in Central Park. Image by underwood & underwood/Forward Association

Why did Dr. Jacob Haas attempt to take his own life in such a grotesque manner? Last Tuesday, Haas ingested 10 grams of cocaine and slashed his own throat, but missed the jugular and managed to remain alive after Meyer Wolf, a doctor who lives a few blocks away, bandaged his wounds. After three hours unconscious, Haas awoke in the prison ward of Bellevue Hospital, where he expressed great regret at not having succeeded in killing himself. Haas had left a $220 check for his niece, Penny Thaler, a clue in this mystery. Just prior to his gruesome act, Dr. Haas was prevented from marrying Miss Thaler because New York State does not allow close relatives to marry. The two had planned to run off to Rhode Island, where such unions are permitted, but it is, apparently, not to be.

Terrible details about the lives of Viennese Jews under Nazi rule are beginning to appear in newspapers in America. One of these details is that many Jews now carry vials of poison with them as they go about their daily business, just in case they fall into the hands of the Nazis. Reports indicate that Vienna no longer exists as it did less than a year ago. Since it fell under Nazi rule, the joy and openness of the city has disappeared. Even its institutions are disappearing: Vienna’s famed medical school, to which students came from all over the world, is shrinking thanks to the disappearance of large numbers of its staff, many of whom are Jewish. The Vienna School of Music has also been shuttered. Its founder, the composer Arnold Schoenberg, has left, along with many of its faculty. Vienna’s literary cafes are also empty. With the Jews being driven out by the Nazis, the city’s cultural life has been decimated.

Hyman Segal, a well-known attorney and former law partner of New York State Attorney General Louis Lefkowitz, was arrested this week on bribery charges, on a claim that he had cut a deal to pay off employees of the state liquor commission. District Attorney Frank Hogan sent a sealed indictment to a grand jury, which will consider the charges against Segal. Hogan told the press that Segal had attempted to bribe at least four members of the liquor commission, as well as the Board of Alcoholic Beverages. It is claimed that Segal was involved in a deal whereby a $1,500 payoff was made so that an owner of a liquor license could use one license in multiple locations. Segal denies the charges.