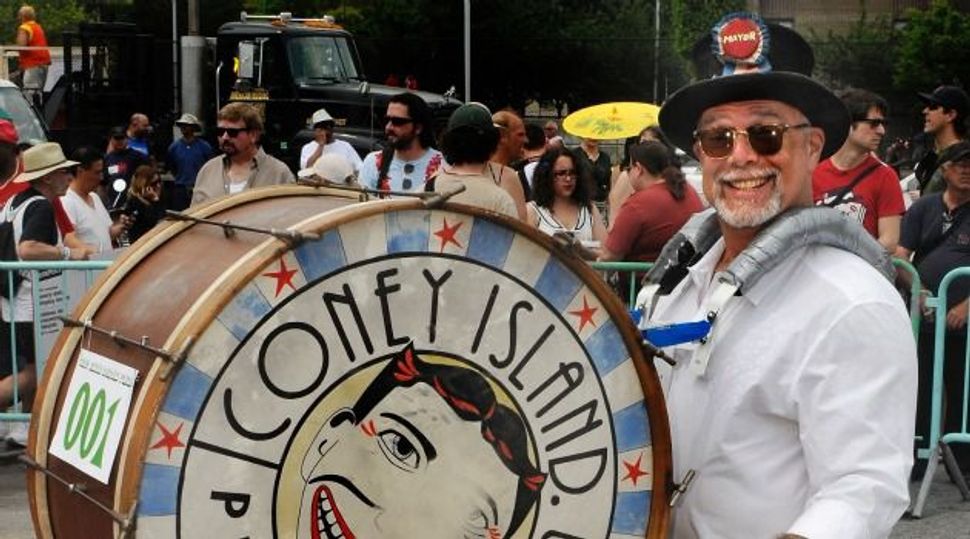 He Can Hear The Mermaids Drumming: Dick Zigun, founder and artistic director of Coney Island?s Sideshows by the Seashore, suffered multiple injuries and $500,000 in damages as a result of Hurricane Sandy. Image by Norman Blake

The Wonder Wheel is revolving, the air is awash in overly sweet smells and tinny music is everywhere. Soon the curtain will once again rise on the iconic Sideshows by the Seashore. The last time I visited, it was a windless, midwinter day. Brooklyn’s Coney Island was eerily desolate, and the only sound was that of the Atlantic Ocean gently lapping the shoreline. Small, dilapidated buildings were boarded up or blanketed in corrugated steel gates, including the theater that houses the sideshow.

I was visiting Dick Zigun, the sideshow’s founder and artistic director. Dubbed “The Mayor of Coney Island,” he is also the force behind the not-for-profit resident arts organization Coney Island USA, which oversees the theater, the Coney Island Museum and the legendary Mermaid Parade. Held each June, the parade will soon celebrate its 31st year. But thanks to Hurricane Sandy, the theater has suffered close to $500,000 in losses.

“Structurally we’re okay, but we lost our contents: the auditorium, the backstage area and the dressing room,” he said matter-of-factly in a small cluttered office one flight above the devastated restaurant space adjacent to the theater. “We lost our storage and a lot of memorabilia, those decades-old funky objects that gave a feel to the place, a patina of the traditional style. But then, all of Coney Island was affected by Sandy.”

This was not a good winter for Zigun, whose own home, several blocks away, was flooded with 4.5 feet of water, resulting in the loss of his furniture and of many prized possessions.

He also suffered a horrific accident with traumatic injuries, including broken bones around the orbit of his eye, a broken nose and severe cuts on his eyelid and eyebrow, all of it requiring reconstructive surgery.

“I went behind the snack bar to get a bottle of seltzer,” he said, and then paused. “I’m talking for the Forward, so let’s talk seltzer. It was seltzer. I had gone to Popeyes and bought a nonkosher chicken sandwich. I was eating lunch and tripped and hit my face on the edge of the counter.”

The medical bills were overwhelming. Zigun went online asking for contributions to help defray his costs, and they’ve poured in. Supporters have also contributed funds and materials — amplifiers, sheetrock, screwdrivers — and volunteers have been helping to rebuild.

Zigun is an amalgam — a Bridgeport, Conn., native who was raised an Orthodox Jew and is now an agnostic. Yet he continues to be proud of his Levite roots. “You’re either born a Levite or you’re not,” he said. “You can’t aspire to it.”

At the age of 14, Zigun grew disaffected with Orthodoxy when he attended Expo 67, the world’s fair in Montreal. “It was a mind-blowing experience,” he recalled. Thanks to Expo’s state-of-the-art science and cutting-edge technology, religion no longer had any traction for him. Prayer and praise didn’t make sense. Despite good relations with his family, gatherings became difficult when they centered on Jewish rituals and on synagogue attendance.

On the secular front, Zigun boasts a graduate degree in playwriting from the Yale School of Drama and is married to a pop musician from Lagos, Nigeria. And on the pagan front, three of his four limbs are covered with baroque swirls of color evoking on each “sleeve,” respectively, air, water and fire imagery. One leg remains bare, awaiting the tattoo artist’s needle for images of the earth.

“That will happen when I’m more grounded,” Zigun explained, deadpan.

Zigun has always had a flair for the theatrical. Early on in his career as the public relations director for the Coney Island Chamber of Commerce, he forged a quirky persona for himself that included a vintage bathing suit and cool sunglasses “way before there was any such thing as the Coney Island hipster,” he said. “I knew that if I were interviewed on television in costume, I would create a visual image that was Coney Island. I became the Mayor of Coney Island in 1984, and since I don’t get a salary and it’s no real position, there’s no term limit, either.”

Instead of aspiring to a Broadway career, Zigun set his sights on Coney Island. “I had this crazy idea that Coney Island could be a staging ground for my whole dramaturgy. Circus freaks and popular culture themes existed even in my early plays. If I was working at The Public Theater or some loft in Manhattan’s SoHo, I’d be creating intellectual art — deconstructionist and metaphorical plays — about popular culture. I wanted to come to Coney Island and do popular culture.”

Sideshows by the Seashore is a marriage of traditional and experimental. Like its earlier incarnations, it’s literally a sideshow — off the main drag — with ongoing performances: sword swallowing, fire eating, snake charming. The requisite inside and outside talkers, popularly known as barkers, are also on hand.

But Zigun’s sideshow also embraces gender bending, women performers who speak (and are not simply seen) and entertainers who voice gay and lesbian, feminist or other political viewpoints. Freaks, born and self-made, strut their stuff, occasionally clad in black and sporting platform shoes as if they’ve stepped out of a 1980s goth nightspot.

Others who are less grunge in their appearance still emerge from a dark place, such as Baron von Geiger, who has had his tongue split as an example of “body modification.” Onstage, he shoots staples into himself and hangs fishhooks from his eyes, bearing chains and heavy weights. Rotating his head, he swings the fishhooks, weights and chains — dangling from his eyes — around in circles.

Much skill is on display, some of it arguably inspiring. Still, the tawdry, seedy and kinky are evident, too, while male and female tourists, locals and professorial types in the audience engage in rubbernecking and chin stroking.

When Zigun launched his sideshow in the mid-’80s, the art form had largely disappeared. Among the challenges he faced, he said, was securing funding without “getting condemned by the nonprofit cultural world for being exploitive and pornographic… In the early ’80s, we were doing something unprecedented. Now students get PhDs in burlesque and sideshow studies.”

Local fundraising among neighborhood Jews, was less daunting. “It is part of Jewish culture to contribute to the arts,” he noted. “Brooklyn is Jewish friendly. And my being a New England Jew without a Brooklyn accent and a Yale education opened many doors.”

Since that time, Zigun has created a sideshow school and is in the process of planning a legitimate theater, which will serve as a platform for plays, written by himself and others, that explore Coney Island topics and themes. Ironically, prior to Sandy his company had received a fully funded $1 million HVAC — heating, ventilation and air conditioning — grant from the New York City Department of Cultural Affairs. The grant will indeed make a year-round theater viable.

But nothing will replace his beloved Mermaid Day Parade and scantily clad women-cum-mermaids prancing down Surf Avenue. The high-camp event is far more complex than a burlesque-coupled-with-Halloween parade, though those elements are surely present, he said.

But so, too, is a mix of “West African aesthetics, a summer solstice water celebration, Greek and Roman pageantry, Coney Island razzmatazz, cheese cake based on Mardi Gras, but also based on the Miss America contest in Atlantic City, which grew out of the earlier parade on the boardwalk,” he said, smiling slyly. “Most people don’t know it’s an art event or that it’s run by an arts organization. I’m tickled pink.”

At the moment our interview ended, a mouse scuttled across the floor.

Today in Coney Island, the temperature is rising, the boardwalk is crowding up, Dick Zigun’s sideshow is ready in the wings. And as for the mouse, well, it may or may not be around. I wish the creature well.

Simi Horwitz recently won The New York Press Club Award for Journalism in entertainment news for her 2012 Back Stage story on buskers.