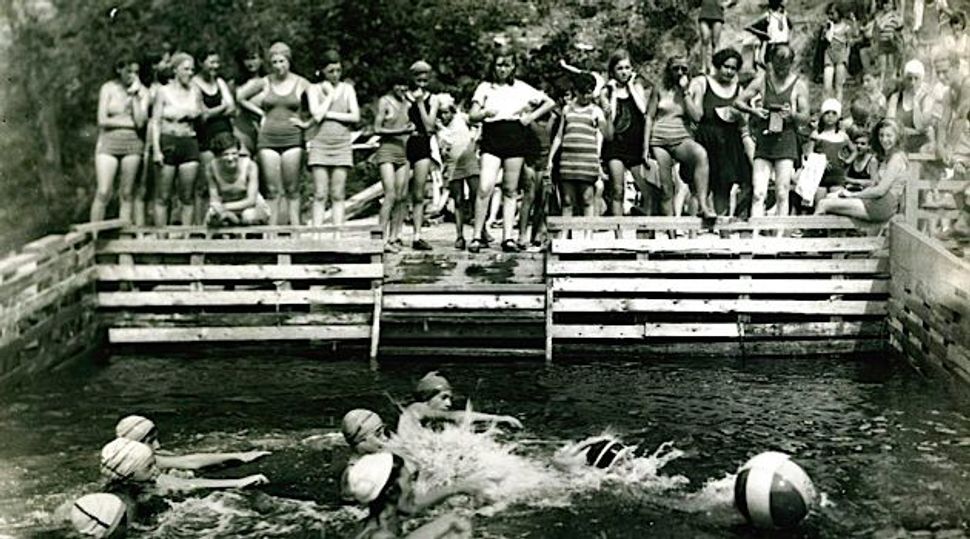 Splish Splash: Teenage immigrant girls from New York City play water polo at a campsite in Kingston, N.Y. owned by the East Side Vacation Camp Association. Founded by several Jewish organizations, including the Forverts, the camp is now located in West Milford, N.J. and is called Camp Vacamas. Image by Forward Association

A black sign hanging on an old three-story house on the Lower East Side’s Madison Street has written on it, in golden letters: “Hebrew Day Nursery.” This means that inside is a place where they keep babies for the day while their mothers are at work. What sad scenes our reporter saw inside. The brightest colors, most powerful pen and the most creative prose couldn’t begin to describe the heartbreaking scenes and breathtaking dramas that take place in the Jewish day nursery — and that’s only as the mothers drop off the kids before work. The nursery wasn’t created as a business: It is free of charge for those who leave their children there. It was founded two years ago by Jewish women, mostly from Russia, who saw a need for working women to have a safe place to keep their children while at work.

In Poland, Ignace Paderewski’s Labor Party, which is currently helmed by General Jozef Haller, passed a resolution that opposes Jewish influence in Polish life and supports Jewish emigration from Poland. The resolution demands “diplomatic, social and administrative action to remove Jewish influences and to transfer all economic positions to Poles.” It also demands a “plan to organize mass emigration of the Jewish community with the help of the government.” The resolution condemns racism and violence and adds that Jews who pledge their loyalty to Poland can remain in the country and retain full citizenship.

A third-century synagogue has been unearthed during excavations in the town of Madris, in eastern Turkey. Two large marble pieces, thought to be part of the bimah, the location from which the Torah is read, were found. Other large pieces of marble with Hebrew and Greek writing listing the names of synagogue members were also discovered. Professor Louis Robert, director of the French Archaeological Institute, is in charge of the dig and estimates that the synagogue was built between 220 and 250 C.E. and abandoned a few hundred years later, sometime during the fourth or fifth centuries. One of the synagogue walls abutted a marketplace with stores owned by Jewish merchants, whose names — Yaakov, Shabtai and Teoktistos — were etched into the walls..