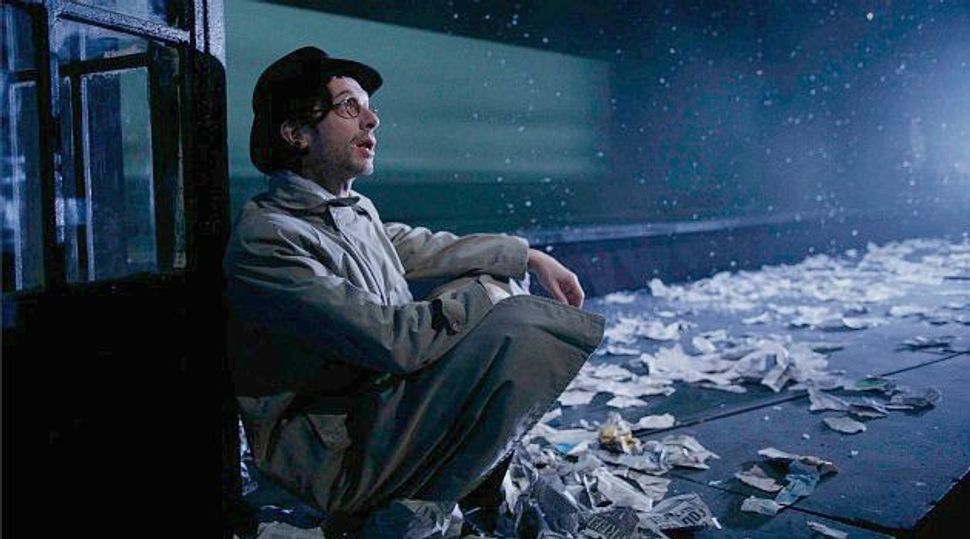 Isaac Bashevis Singer’s novel “Enemies, a Love Story” is about Jews who survived the Holocaust, then ended up in the United States in the 1950s to start their lives anew.

But how is it possible to carry on after your children were executed by Nazis, your wife was murdered, and you had been hiding in a hayloft, unable to protect the peasant girl who had been hiding you for three years under threat of death?

Herman Broder, the novel’s main character, lives in Brooklyn. He is consistently haunted by a nightmare: “They were poking with their bars trying to find him, and he was digging deeper and deeper into hay,” Singer writes. Herman wakes up, but the nightmare doesn’t go away.

Herman is surrounded by women. The gentile Polish woman Yadwiga, a shy peasant who was the former servant of his parents, saved him and he married her out of gratitude. Masha, a Jewish woman from the concentration camps, is a searing beauty, who, like Herman, is unable to forget the past. Tamara, Herman’s first wife, has returned from the land of shadows where she watched her children being executed.

Herman throws himself from one woman to another, as if running from himself and from each of them. Yet all these characters are united by the catastrophe they survived, tied together by death. The insanity that seized us during the 20th century did not end with the end of the war, of the Holocaust, of the catastrophe of the Jewish people. It continues mutilating human souls.

Sometimes in life one has a period of a particular writer. For me it was Singer. As a theater director, this is not the first time I have turned to him. Before “Enemies,” I directed “The Slave” and “Shosha.”

In a certain sense, “Enemies” completes the Singer trilogy performed by my company, Gesher Theater. I always wanted to get back to him. In his novels, stories and prose — despite their biblical, epic nature — there is some unique particularity. They are dramatic by nature. “Enemies” is not just a wonderful piece of literature, but a diligently made psychological portrait of a certain generation.

Generally I like to deal with prose. It is a free space and one can easily get lost in it, but there’s also a chance to create theater. I’m not trying to turn a novel into a play, but every time I’m trying to find some theatrical effectiveness — the emotional and active environment in which a performance can be born. A novel has its own language; so too does the theater. It’s like building a bridge from one world into another. The dynamics of this two-way movement enables the birth of what is called performance.

The Israeli staging of the novel was written in the nation where the word “catastrophe” awakens a long chain of associations. Our task was to create a story of a specific man, and also of a people united by one destiny. We presented the Catastrophe as a metaphor for a serious identity crisis, the death that we bear inside ourselves, fear in the face of human vice, isolation of man from his place, his language, his past and his childhood. In the world before the Catastrophe they used to have children, but everyone was murdered; during the novel’s action itself they don’t have children, and only in the end of the novel a new baby is born. Hope? Apparently yes. It was important for us to keep a sense of humor, the eternal Jewish weapon. That’s why we used jokes that did not appear in the book. Black humor is evidence that we survived and deserve the right to make fun of those who raised their hand against us: “Why Hitler died?” asks Yasha Kotik, one of the characters in our adaptation of the novel. “He got the gas bill.”

The topic of the Holocaust in Israel, especially nowadays, requires special delicacy and originality to redefine the ways of keeping the national trauma in our memory, all the while avoiding excessive pathos and stereotypes, without creating an impersonal mythology of death. In Israel, the Holocaust is marked by a state ceremony.

It is clear that the Catastrophe occupies the minds of writers, some of whom survived it themselves or who represent the second and third generations. There are a lot of wonderful authors, whose works have become the basis for successful performances. Among them are Yoram Kaniuk’s “Adam Resurrected” and David Grossman’s “Momik.”

In “Enemies,” as in most of Singer’s works, there are no descriptions of concentration camps, no electric fences, no Nazis; he managed to flee from Warsaw to New York before the war broke out. In spite of this, he creates an unbelievably credible dramatic situation, with which we — children of the new millennium — can all identify.

Many have reproached Singer for playing down the importance of the Catastrophe by telling us about love and treason of the survivors, about the vain people who sin and betray. But these are only human beings, and this is the way they are, and it’s important not to create “holy Jews,” and also to remember that not all Germans were Nazis. Only with human morals and impartiality, and not with mythology, will we be able to analyze our past.

Yevgeny Arye is the artistic director of the Gesher Theatre in Jaffa, Israel.

Isaac Bashevis Singer’s “Enemies, a Love Story,” which Arye adapted for the stage along with Roy Chen, will appear on stage at New York’s Lincoln Center as part of the Cherry Orchard Festiva from June 6 to 9.