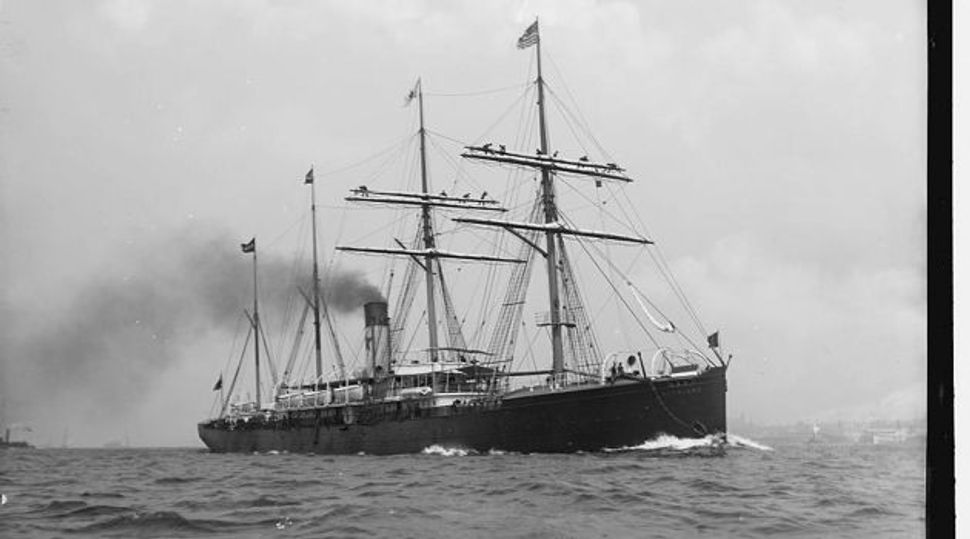 The story of Jewish immigration to America will soon be retold in Antwerp, Belgium.

A museum dedicated to the Red Star Line, the shipping operation that carried more than 2 million people to the United States from 1873 to 1934 — many of them Jews — will open in Antwerp in September.

Founded in Philadelphia in the 1870s, the Red Star Line was a joint operation founded by a local businessman along with two Belgian investors to transport petroleum, grain and people to and from Europe. The line had ports in Philadelphia, New York City, Antwerp, and in Liverpool and Southampton in the United Kingdom. While many first- and second-class passengers boarded the Red Star Line as tourists, the ships also accommodated hundreds of steerage passengers each — mostly Jews who were fleeing Eastern Europe.

Plans for the Red Star Line Museum began in 2005, when the city of Antwerp purchased three decaying buildings on the Antwerp harbor that originally served the ship line. At the time of the purchase, the buildings were owned by a private harbor company, which had slated them for redevelopment as apartments.

“Some people in the city started to realize that these are historical buildings, and we can’t just put apartments there,” said Ben Van Alboom, project manager of the Red Star Line Museum, who is promoting the museum in the United States.

The vice mayor of Antwerp, Philip Heylen, pushed the project forward; about 85 percent of the cost of the $25 million facility was covered by public funding.

In the museum, a timeline of human migration includes notes on 20 famous migrants and then the historical exhibition includes 20 personal stories of passengers who traveled on the Red Star Line. Composer Irving Berlin was a passenger and appears in the timeline; his family loaned his transposing piano (a rare kind of piano that automatically transposes music from one key to another) to the museum. Albert Einstein was another famous Red Star traveler; a letter he penned on Red Star Line stationery announcing his resignation from the Prussian Academy of Sciences is also on loan at the museum. He apparently wrote it aboard ship as he fled the Nazis.

The main exhibit in the museum simulates the immigration experience. Museumgoers will first visit a fake Warsaw travel agency, then proceed to the interior of a train carriage which takes them to the simulated city of Antwerp. Steerage passengers go through a screening process and then board a mock ship that takes them to Ellis Island or an immigrant intake center in Philadelphia.

The Red Star Line museum also pays homage to the Jews who stayed in Antwerp rather than continue on to the United States, either because they were deemed unfit to travel or because they saw business opportunities in the city. Today, Antwerp’s Jewish population is around 15,000; many have family ties to the diamond business.

The Red Star Line Museum is but the latest in a growing number of immigration museums in Europe. London’s Museum of Immigration and Diversity chronicles the waves of Huguenots, Irish, Eastern European Jews and Bangladeshis who came to England. The BallinStadt Emigration Museum in Hamburg, Germany is named for Albert Ballin, the Jewish owner of the Happag shipping company that transported millions of Europeans to the United States. There are also immigration museums in Bremerhaven, Germany; Cobh, Ireland, and Cherbourgh, France.

“There’s been a growing interest in Europe in immigration, because we are confronted by lots of immigration,” said Luc Verheyen, the Red Star Line Museum’s project coordinator in Antwerp. With the new institution, he said, “we tried to give immigration new meaning for a wider public, an example of a global phenomenon.”

Molly Arost Staub is a freelance writer and the former editor of Palm Beach Jewish World.

This article was updated on June 12 to clarify the identity of the founders of the Red Star Line and to correct the contents of the timeline and historical exhibition.