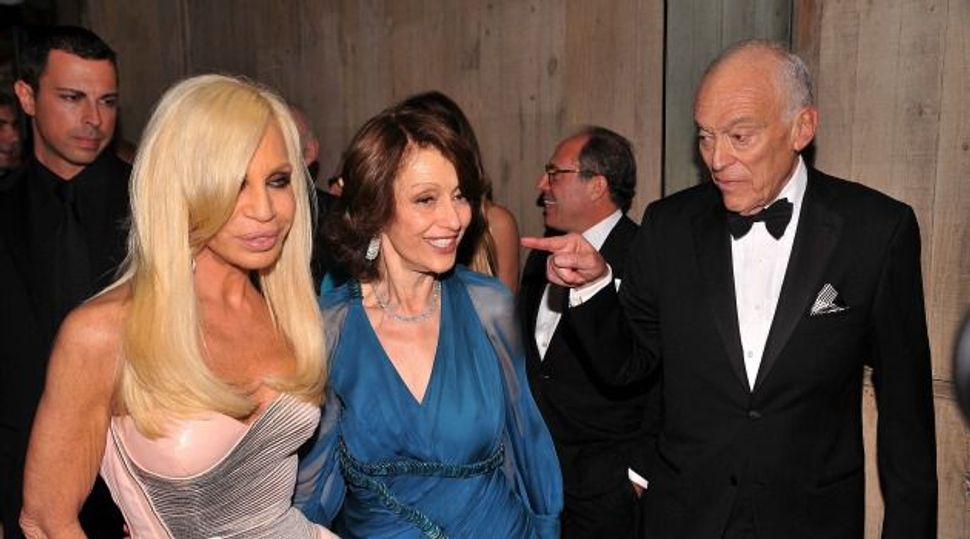 Patron of the Arts: Leonard Lauder, seen here at a gala for the Whitney Museum, donated his collection of cubist art to the Metropolitan Museum of Art. Image by Getty Images

Once derided as a “non-visual people,” the Jews of the late 19th and 20th centuries stood that appellation on its head by championing the arts with a vengeance. Those at the grassroots flocked to museums, concert halls, libraries and the theater; others, especially an emerging haute-bourgeoisie, became patrons of the arts. Still others took another look at traditional Jewish ritual objects and redefined them as objets d’art. In each instance, art became the vehicle by which the Jews laid claim to the public square and embraced the possibility of truly belonging to the commonweal.

I was reminded of the triangulated relationship among the Jews, modernity and the arts by a curious concatenation of recent events: Leonard Lauder’s decision to donate his monumental collection of Cubist art to New York’s Metropolitan Museum of Art; Sotheby’s multimillion-dollar auction of the wide-ranging Judaica collection of Michael and Judy Steinhardt, and the Library of Congress’s celebratory exhibition, “Words Like Sapphires,” which marked the centennial of its heralded collection of Hebraica.

Although one took the form of an outright donation, the second that of an auction and the third the structure of a public exhibition, all three events were bound together by, and cannot be fully understood apart from, the currents of modern Jewish history. Lauder’s art collection, for instance, is of a piece with the great assemblages formed by earlier generations of Jewish collectors such as the Rothschilds, the Camondos and the Sedelmeyers. For them, as Richard Cohen of The Hebrew University of Jerusalem astutely explains, the acquisition of paintings, textiles and sculpture was as much an exercise in social integration as it was a celebration of beauty. Later still, when these collectors chose to donate their holdings to a museum rather than sell them on the open market, this, too, was meant to be seen as an expression of civic-mindedness and, concomitantly, as a bid for inclusion.

The Steinhardts’ collection of Judaica also bears the telltale earmarks of history. Like that of its late-19th-century predecessor, the Isaac Strauss collection, which had the signal distinction of being the very first public display of Judaica ever — it was held in 1878 at the Palais du Trocadero, then a popular venue for ethnographic exhibitions — the Steinhardt collection reflects a determinedly modern way of engaging with Jewish ritual objects. Showcasing form rather than function, it places a premium on materiel and shape, on charm, whimsy, rarity and historicity — on aesthetic criteria rather than on religious significance and meaning.

In fact, Michael Steinhardt has repeatedly made a point of distinguishing between his collection, which is rooted in Halacha and minhag (accepted tradition), and his personal beliefs, as a “rather loudly self-proclaimed atheist.” “I felt, and continue to feel,” he told a reporter from Vanity Fair, “that to be committed to the Jewish people, and to be a committed Jew, does not require a belief in God. It requires a belief in the Jewish people.”

The Jewish people also figure prominently in the Library of Congress’s collection of Hebraica, one of the world’s leading repositories of books, manuscripts, films and recordings. Initially conceived of as a “congressional library” for the exclusive use of the members of the House of Representatives and the Senate, the Library of Congress soon evolved into the country’s “National Library,” the cynosure of America’s citizenry. When, in 1912, the opportunity arose to purchase a significant collection of Hebrew books — upward of 9,936 volumes and pamphlets spanning nearly three and a half millennia that had been carefully assembled by Ephraim Deinard (a fascinating character in his own right) — the Librarian of Congress, Herbert Putnam, turned to Jacob H. Schiff, one of the nation’s leading Jewish philanthropists and a man known to be a “munificent patron of Jewish learning,” for support.

Putnam’s pitch is well worth quoting from, especially in its deployment of the term “Hebrew,” then the preferred, more elegant term for those of the Jewish persuasion.

“For some time past,” Putnam wrote, “I have wished to establish here in the National Library a department of Hebraica…. Now there happens to be just now available a collection… that would really signify not merely in its direct service to scholars, but as a recognition of the part which Hebrew history, literature and tradition, as well as the Hebrew race, play and will play in the affairs of this country.”

Intrigued by Putnam’s overture and its twin appeals to racial and civic pride, Schiff sought out the advice of those familiar with both Washington and the world of books, among them Cyrus Adler, a former high-ranking official of the Smithsonian Institution. Adler encouraged him to consummate the deal, arguing persuasively that a “strong department in the National Library would do much credit to our people.”

When put that way, American Jewry’s very own Maecenas found it hard to disagree. In 1912 and again in 1914, Schiff provided the funds that helped the Library of Congress establish what would, a century later, become one of the most pre-eminent of public institutions for the study of Jewish history, culture and literature — and, as it happens, the source for much of the material on which this and so many other of my columns draw.