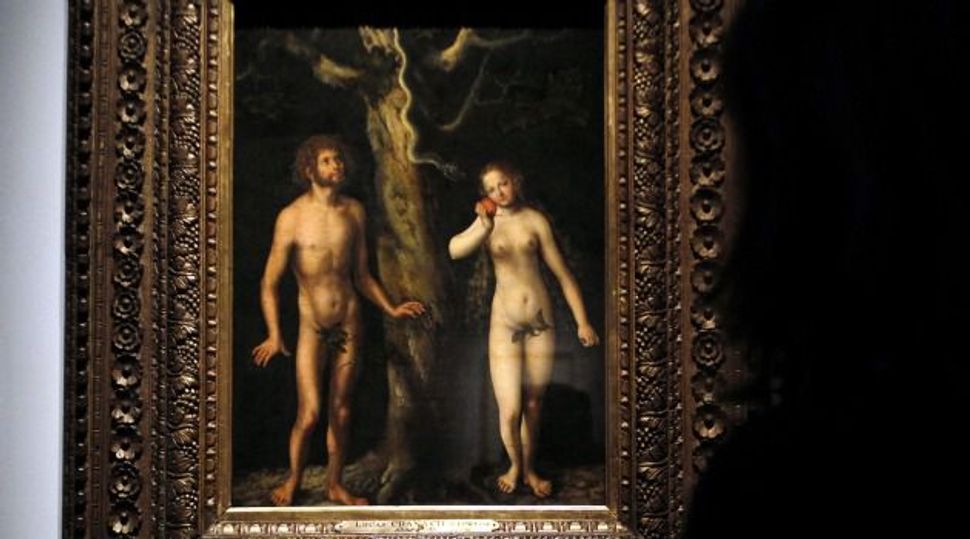 The Original Tautology: Writing about the serpent?s seduction of Eve in the Garden of Eden and about a statement in the Talmud, Rabbi David Kimchi said that Adam and Eve?s transgression polluted all humanity until the stain was removed from Israel at Mount Sinai. He remarked, ?I won?t expound on this homily so as not to reveal hidden things? and ha-mevin yavin.? Image by Getty Images

In last week’s column, I argued, in discussing the Hebrew word sefirah, that the kabbalistic doctrine of the 10 sefirot or emanations of the divinity was not a result of Christian influence. This week, going from the cosmic to the strictly linguistic, I’ve been led to the conclusion that a well-known rabbinical expression definitely was influenced by Christianity.

It all started with a query from Dr. Isaac Elishakoff of Delray Beach, Fla. In it he asks: “Could you please comment on the Hebrew expression ha-mevin yavin? What would be the best translation of it into English? Is there an English equivalent of it?”

The Hebrew words ha-mevin yavin can be translated literally as either “He who understands will understand” or “Let him who understands, understand.” It’s a way of saying in rabbinic literature, “I’m not going to say anymore — either you get it or you don’t,” and it’s still used today in Israeli Hebrew.

Ha-mevin yavin has been around in rabbinic literature for a long time, although apparently not, to my surprise, for as long as I would have thought. The two earliest examples of it that I was able to come across in an admittedly far from exhaustive search are both less than 1,000 years old. The first comes from the writings of the medieval talmudic commentator Rabbi Abraham ben David (1120–1198), author of a critique of the halachic work of Maimonides. In one place, disagreeing with the latter about a point of kosher slaughtering, he writes: “There is [in Maimonides’s opinion] neither salt nor spice [that is, nothing of substance], and ha-mevin yavin.”

The second example comes from the biblical commentary of Rabbi David Kimchi (1160–1235). Writing about the serpent’s seduction of Eve in the Garden of Eden and about a statement in the Talmud (strikingly reminiscent of the Christian doctrine of Original Sin) that Adam and Eve’s transgression polluted all humanity until the stain was removed from Israel at Mount Sinai, Kimchi remarks, “I won’t expound on this homily so as not to reveal hidden things… and ha-mevin yavin.”

These examples illustrate the two kinds of situations in which ha-mevin yavin is most commonly used by the rabbis. One is when a commentator does not wish to waste words on explaining his reasoning, leaving it to the reader to figure it out for himself. The other is when a commentator does not care to be explicit about a delicate or esoteric matter and keeps his remarks to a minimum that requires interpretation.

Where does this expression, which is not in the Mishnah or Talmud or earlier rabbinic literature, come from: a hint, I believe, is found in the fact that both Rabbi Abraham ben David and Rabbi David Kimchi — respectively known to students of Talmud as “the Rabad” and “Radak” — lived in Provence, in the south of France, in the same period. This points to the likelihood that if there was an outside linguistic influence on them, it came not from the Arabic of the Middle East and Spain, the language spoken by most of the world’s Jews at the time, but from Provençal or Latin, the written language of Western Christianity.

Following up on this leads one to the probable source of ha-mevin yavin very quickly. It is a verse in the New Testament, in the book of Matthew, where Jesus, asked by his disciples about a statement he has made concerning marriage, which they have interpreted to mean that celibacy is a better state, answers that this applies only to those “who have made themselves eunuchs for the kingdom of heaven’s sake,” and adds, in the King James translation, “They who can receive this, let them receive it” (in Latin, qui potest capere, capiunt).

Jesus is probably not trying to be cryptic here. (When he is, which is often, he generally says, “He who has ears to hear, let him hear.”) In the more or less classical Latin of Jerome’s Vulgate translation of the New Testament, capere usually means to receive or take possession of something, although it can also mean to grasp or understand, so that what he seems to be saying is that celibacy is only for those able to accept it as a spiritual discipline. But in medieval Romance vernaculars, capere’s secondary meaning of “to understand” came to be the dominant one, as in Italian capire; and qui potest capere, capiunt was also read as, “They who can understand this, let them understand,” and became an expression in languages like Provençal.

This is where, I would venture to say, the origins of ha-mevin yavin lie. If one doesn’t mind their somewhat archaic tone and Christian associations, “Let whoever understands, understand” or “He who has ears, let him hear” can certainly be used as an English equivalent. If one does mind, I would suggest to Dr. Elishakoff my formulation at the beginning of this column: Either you get it or you don’t.