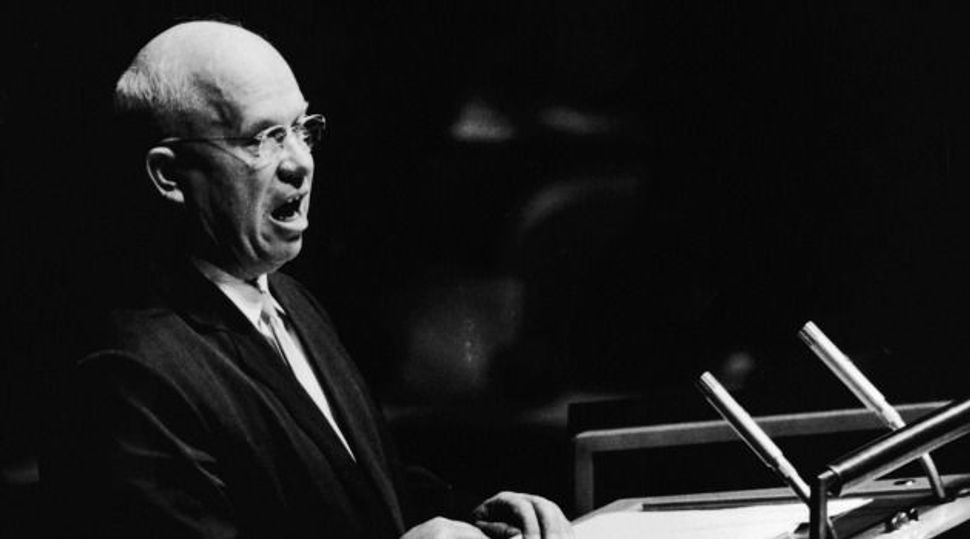 50 Years Ago: Philosopher Bertrand Russell called out Nikita Khrushchev (above) for denying that there was anti-Semitism in the USSR. Image by Hulton Archive/Getty Images

The American-Romanian Jewish Emancipation Committee held a gala affair at the Waldorf Astoria Hotel, during which the tragic situation of Romanian Jewry was discussed. Among the patrons were a number of current and former congressmen. Among the matters up for discussion was the potential lobbying of European governments requesting that they pressure the Romanian government to give their Jewish citizens equal rights, which they are supposed to have had officially since 1878, when they were given civil rights alongside Christian citizens. But Romania’s government has never given the country’s Jews their rights, and instead continues to incite against them.

Jacob “Gurrah” Shapiro was recently convicted on racketeering charges and sentenced to three years in jail and payment of a $15,000 fine. Judge Grover Moscowitz, who sentenced Shapiro, added that the gangster would first have to complete a previous two-year sentence for racketeering in the fur industry before he begins his latest punishment. Gurrah cried like a baby at the sentencing, screaming: “I was framed! They only think I’m a racketeer. I didn’t commit no crime! I’m an honest man. I pay my taxes — $30,000 to the government last year!” Gurrah’s protest was to no avail. At the conclusion of the sentencing hearing, the police cuffed him and sent him to prison.

Eliezer Wiesel, the Forverts’s special correspondent, reports that the well-known English philosopher, Lord Bertrand Russell, published a copy of a letter he sent to Soviet Premier Nikita Khrushchev in which he inquired about the situation of Jews in the USSR. A copy of the letter was also sent to Isvestiya, the official Soviet news agency. In the letter, Russell stated that Khrushchev’s recent comments that there is no anti-Jewish discrimination in the USSR do not satisfy him. “There is absolutely no doubt that there is, in fact, anti-Jewish discrimination in Soviet Russia,” Russell wrote. “I am deeply worried about the status of Soviet Jews.” He also stated that he would continue to discuss the issue in public forums as long as Jewish culture in the Soviet Union is not rehabilitated.