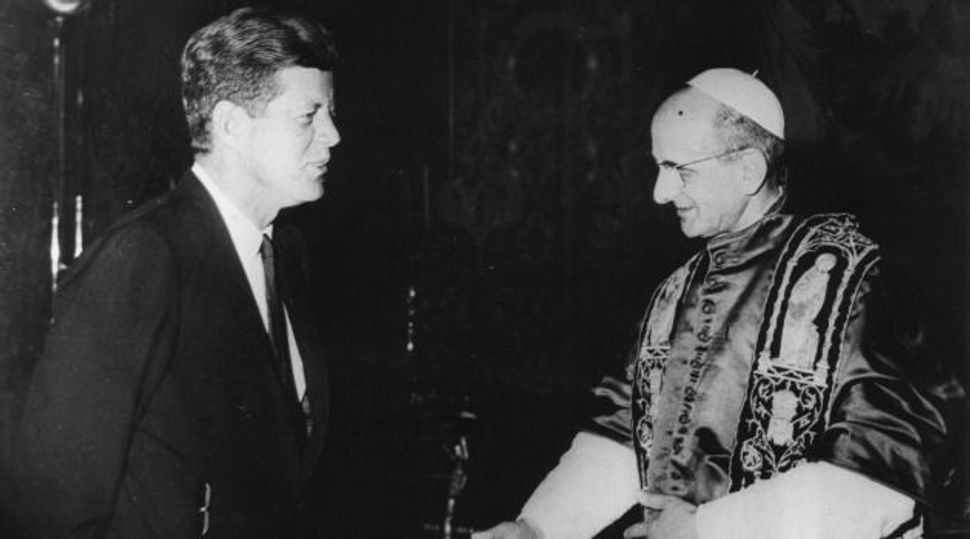 ● From Enemy to Brother: The Revolution in Catholic Teaching on the Jews, 1933–1965
By John Connelly
Harvard University Press, 384 pages, $35

My definition of Catholic-Jewish relations: an unnatural act engaged in by partially consenting adults — following an opening prayer.

This one-liner tells us much that we need to know about the relationships between Christians and Jews in the second half of the 20th century. Jews and Catholics — especially Jews — are intensely conscious of the viciousness of 2,000 years of Christian history, and we need to probe the fact that there is still a relationship of any sort.

The relationship came to be in a dramatic moment indeed. The Second Vatican Council, with its watershed document Nostra Aetate (Latin for “In Our Time”), the “Declaration on the Relation of the Church With Non-Christian Religions of the Second Vatican Council” was promulgated in 1966 under the papacy of Paul VI. Nostra Aetate generated intense debate among the bishops of Vatican II. The declaration articulated a new protocol for how Catholics view Jews, and by extension changed the nature of the relationship between members of the two religious communities. The core of Nostra Aetate was a forthright condemnation of anti-Semitism and a rejection of the charge of deicide — that Jews forever were responsible for the death of Jesus Christ. In brief, it was a revision of the two-millennium official Christian teaching on the Jews. The church now formally decried “hatred, persecutions, displays of anti-Semitism, directed against Jews at any time and by anyone.”

To historian John Connelly, Nostra Aetate represented nothing less than a revolution in Catholic thinking, the most radical of the radical innovations of Vatican II. In “From Enemy to Brother: The Revolution in Catholic Teaching on the Jews, 1933–1965,” Connelly’s proposition is that Catholic empathy toward Jews — the overturning of two millennia of Catholic teachings of contempt — did not come out of nowhere. It did not spring from Christian sources, and certainly not from Jewish ones.

Connelly reminds us, repeatedly, that the early history of the church was such that anti-Jewish themes were not only incorporated into the new theology of Christianity; it was an absolute necessity that anti-Judaism be core to the contouring of Christian theology, and it was. If this were the case, then this anti-Judaism would be impossible to root out. And it was. Even church leaders who were sympathetic to Jews and Judaism, and who battled racism, could not overcome the inertia of 2,000 years of theological anti-Judaism deeply inculcated in priesthood, practice and publications.

Among the startling revelations in “From Enemy to Brother” is Connelly’s analysis of the effect on the church of the new, virulent forms of anti-Judaism, the racist anti-Semitism that flourished in 19th-century Europe. It was in the 1930s that the Catholic Church in both Germany and Austria succumbed to an unusual species of racially tinged anti-Semitism. This version of Jew hatred, as historian George Mosse taught, combined itself with the centuries-old notion of the German Volk, the national German folk-identity that was central to Nazi ideology and informed Nazi practice. Influential German theologians extolled the “blood unity” of the German Volk, and praised Hitler as a savior who would heal the “diseased national body.” German Catholicism proved unusually susceptible to this racist syndrome, which crafted its idea of national-racial unity from the traditional idea of the church as Jesus’ mystical body.

With this as background, how did Nostra Aetate happen at all? It was not enough that Angelo Roncalli, Pope John XXIII, a rule-breaker pope if there ever was one, wanted it.

The revolutionary event did not come without a struggle. Two thousand years of doctrinal inertia was almost impossible to overcome. Connelly’s detailed retelling of the story of the genesis of Nostra Aetate reveals that most of the architects of the document were themselves Jews who had converted to Christianity. The idea that any number of the Catholic leaders (not the actual drafters of the document) who shaped Nostra Aetate had themselves started out in life as Jews is singular and startling. The point: These churchmen — and their number included serious leaders — were thus naturally more sympathetic toward Jews. To Connelly, the historical context is crucial: The 1960s were but a few years after the end of the Holocaust; a new language was needed to relate to Jews; “Only [through] converts could the Catholic Church find a new language to speak to the Jews after the Holocaust.”

Connelly identifies a number of these converts (some were converts from Protestantism). Perhaps the most visible was John Oesterreicher, a Jewish-born German and convert to Catholicism who was a leading figure in shaping the pro-Jewish aspects of Vatican II.

What emerges in “From Enemy to Brother” is that the converts pressed for a new approach to thinking about covenant; that the relation between Judaism and Christianity was no longer to be understood as competitive or successive, with Judaism being a mere preparation for Christianity, but complementary. This idea of two complementary covenants was truly revolutionary and is discussed coherently and cogently in “From Enemy to Brother.” Connelly’s conceit is that the church would not have been able to come to this conception without the “doubling” of identity — Jew and Catholic — that was brought within the sacred Vatican precincts by those who had been considered outsiders and worse.

Despite the fact that “From Enemy to Brother” was published last year, it is unusually timely in light of a new administration in the Vatican and, internally, in the Jewish community, in the ongoing discussion over the nature of interreligious relationships. This discussion, highly sensitive especially in the Modern Orthodox world, was, in fact, triggered by the convening of Vatican II and the drafting of Nostra Aetate.

“From Enemy to Brother” is superb in its analysis of how Nostra Aetate came to be, and especially in Connelly’s discussion of how the drafters of the document arrived at their view of the validity of the Jewish Covenant. Missing, however, is a treatment of the larger context of Vatican II; the reader is left scratching his head, trying to figure out how various personalities and issues fit into the setting of Nostra Aetate. A coherent discussion of Vatican II itself would have helped make sense of the otherwise vivid biographies of the churchmen that the author catapults at the reader.

The equally interesting story, also not addressed by Connelly, is, of course, that of how Jews viewed Christians. The Jewish community itself has been conflicted with respect to how to relate to non-Jews. Within the mainstream Modern Orthodox world, interreligious relationships were defined by Orthodox leader Rabbi Joseph B. Soloveitchik, who in 1964 asserted that Jews and Christians ought to engage with each other on issues having to do with the betterment of society. But anything having to do with the nature of the faith community itself, such as theology, is untranslatable to the other community, Soloveitchik said, and is therefore off the table.

The Soloveitchik position, dominant for 50 years in the Modern Orthodox world, has long been controversial within the Orthodox arena. But in 1964, did the Jewish view impact the discussions at Vatican II? Connelly’s thoughts on this matter would have been welcomed.

Are nterreligious relations “an unnatural act”? Perhaps; there is always something unnatural about going from enemy to brother. But Christians and Jews, looking at Nostra Aetate a half-century after its drafting, will use “From Enemy to Brother” as a guide in this fascinating — and yes, unnatural — journey.

Jerome Chanes, a fellow at the Center for Jewish Studies of the CUNY Graduate Center, is the author of four books on Jewish history, sociology and public affairs. He teaches in the City University system.