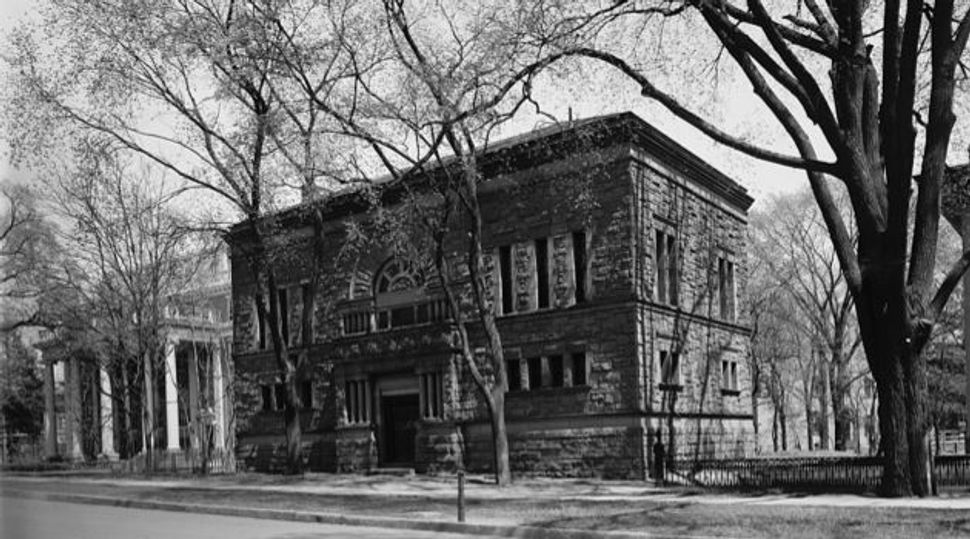 Not Fraternal: An Alpha Delta Phi fraternity house (above) at Yale College remained open while a City College chapter closed rather than admit Jews. Image by Library of Congress

The Alpha Delta Phi fraternity, an organization of secret societies based in colleges and universities throughout the country, has revoked the charter of its chapter at City College. The reason the national headquarters of the fraternity gave was that “there are too many Jews at City College.” As it happens, the City College branch of Alpha Delta Pi did not have any Jewish members. But because there are large numbers of Jewish students at the college, and because members are in contact with Jewish students, the fraternity’s national headquarters decided to act pre-emptively to avoid having to decide whether or not to permit Jews.

With the number of Jewish refugees coming out of Germany and Austria growing day by day, certain countries are beginning to cherry-pick the cream of the crop. It has been reported that a Turkish representative in Paris has received instructions to travel to Vienna in order to lure Jewish professors to Turkey. Meanwhile, daily life for Jews in Vienna has become a nightmare, with mass firings from virtually every type of business and industry, and mass arrests and deportation to the Dachau concentration camp. Many relatives of deportees have received from the Nazi government postcards that state the name of their relative, along with the word “deceased.”

William Baumfeld, a 33-year-old police detective, was shot by an unknown bandit. Baumfeld and his partner, James Minto, were on an early morning stakeout in the Congress Hotel on West 69th Street in Manhattan, when two bandits entered in order to rob sleeping guests’ rooms. They took the hotel’s owner and the building’s elevator man, locked them in a closet and began to move from room to room. The detectives staked out two rooms next to each other, and these were the first rooms the bandits attempted to rob. When Minto saw a revolver poke through his door, he backed down. Baumfeld engaged in a gunfight and was shot and killed.