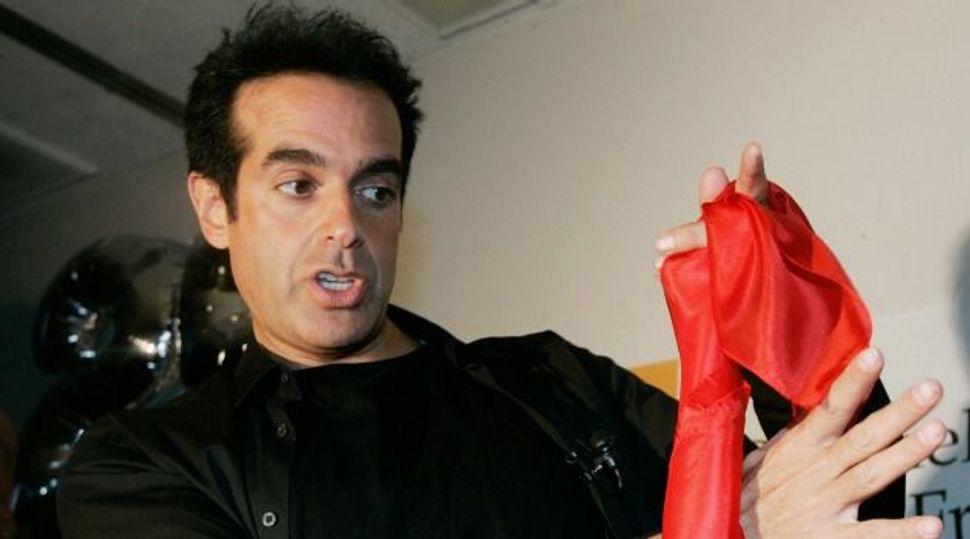 In the September 9, 1928, edition of the Forverts, a story with the headline “Leading American Magicians are Jews” opened with the following lede: “When a Jew rolls up his sleeves it doesn’t always mean business. It means magic.”

With many Jews already working as magicians back in the day, there was every expectation that more would join the fold. Still, there was no way to anticipate the staggering success of David Copperfield, who, in addition to holding 21 Emmys, 11 Guinness World Records and a host of other honors, is the wealthiest magician of all time.

He founded and owns the Las Vegas-based International Museum and Library of the Conjuring Arts, the largest collection of magic books, archives and memorabilia in the world. He also owns a chain of islands in the Bahamas.

Born David Seth Kotkin, the son of middle-class parents in Metuchen, N.J., Copperfield sees a direct link — indeed, a historical connection — between being Jewish and achieving the most stunning and unlikely feats.

“Being Jewish is all about picking yourself up by your bootstraps,” he told the Forward. “When people are beating you down and throwing you out, you just dust yourself off and make the best of it. That’s the Jewish upbringing. And magic is about taking adversity and turning it into a smile, taking the no’s and turning them into yesses. Magic is about making people dream.”

Copperfield attended Hebrew school, became a bar mitzvah and to this day honors his roots. It’s an important part of who he is — “for better or worse,” he added. “I have a personal relationship with God and I pray a lot. My kids go to Hebrew school.”

Copperfield credits his Brooklyn-born Russian Jewish father and especially his tough Israeli mother with perhaps unwittingly paving the way for his achievements. His father was the gentler of the two parents and a frustrated actor in his own right who was openly supportive of his son’s ambition.

By contrast, his mother was the tough, harsh critic and not at all encouraging. “Paradoxically she strengthened me and made me fight harder,” Copperfield recalled. “She was the classic Jewish mother.”

On the emotionally charged topic of name changing, Copperfield said he initially planned to be an actor and didn’t think “Kotkin” was a good actor’s name. While the title character in the Dickens classic is memorable and nobody else in show biz has it, Copperfield is not sure, were he just starting out now, whether he would change his name at all, as prevailing sensibilities have evolved. If he had it to do over, he said, he might not pick “Copperfield” because he now views Charles Dickens as anti-Semitic.

Copperfield’s early influences were not magicians, but rather such movie directors as Frank Capra and Orson Welles, whose storytelling talents he admired. His own magic has always been rooted in a narrative, no matter how spectacular its production value.

“We have to keep on inspiring and outrunning expectations,” Copperfield said.