When the Second Verse Is Same as the First in Hebrew 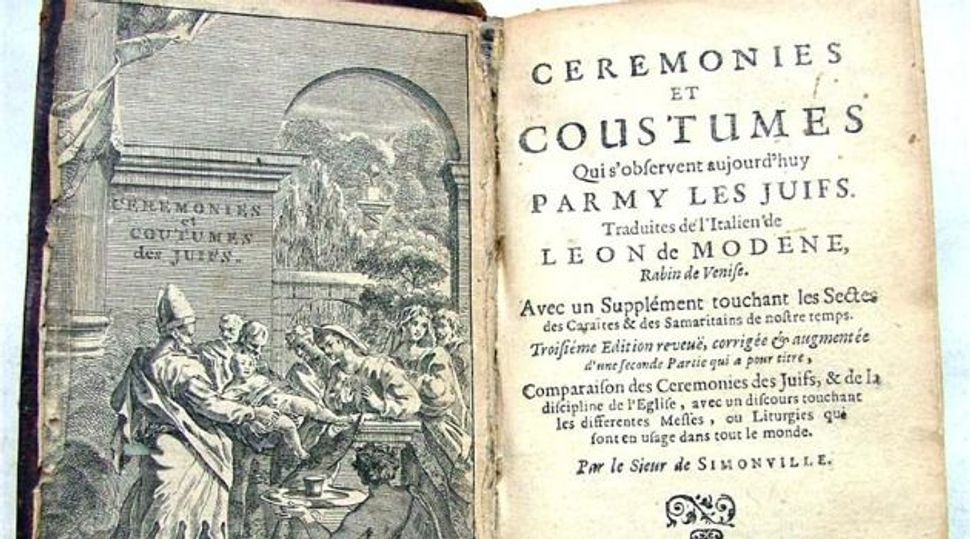 From Ben Zion Katz of Chicago comes this email:

“The noted Italian rabbi Leon de Modena (1571-1648) accomplished a linguistic tour de force by writing an octet, entitled Kina Sh’mor, that made sense whether read as Hebrew or Italian. My brother Jeffrey and I have written a poem that does the same with Hebrew and English and think your column might be a suitable venue for it.”

Leon de Modena’s Kina Sh’mor, “Mark This Lament,” is both the earliest and best example known to me of what is called homophonic verse, and it seems even more extraordinary when one considers that he wrote it as a bar mitzvah boy of 13. (One of the most fascinating characters in Jewish literary and intellectual history, de Modena grew up to be not only an outstanding scholar, poet and all-around Renaissance man, but also a compulsive gambler who repeatedly lost all his money.)

In a rough translation (the Hebrew is difficult in places), this would be: “Mark this lament! Ah, but the treasure of him has passed, / All his divine good! The shadow of God’s judgment falls on my cup of light. / Moses, my teacher, Moses, how precious all was in him, / How much resourcefulness and strength were there! This is his Day of Atonement.”

And now for De Modena’s homophonic Italian version. This is “Chi nasce, muor. Oime, che pass’ acerbo! Colto vien l’huom, cosí ordin’ il Cielo. / Mose mori, Mose gia car de verbo. / Santo sia ogn’ huom, con puro zelo.” This translates as (or so I hope; my Renaissance Italian is imperfect): “Whoever is born, dies. Ah, me! A bitter thing has come to pass! / A man has been plucked, such is the decree of Heaven. / Moses, my teacher, Moses, so precious of speech, / Sainted be he of all men, pure was his zeal!”

Note that this is the opposite of an ordinary translation, in which the translator seeks accurately to reproduce the meaning of the original words in another language whose words sound different.

The goal of homophonic translation — an extremely difficult form that is for good reasons rarely attempted — is to reproduce the original’s meaning as far as possible in words that sound the same. Compare, for example, de Modena’s first lines in Hebrew and Italian. Spelled phonetically, with stressed syllables in capitals, the Hebrew is: “Ki-NAH sheh-MOHR, oy MAH ki PAHS o-TSAHR bo.” The Italian is: “Ki-NAH-shey, MWOHR! Oy-MEY keh PAHS ah-TSHER-bo.” The similarity of sound is almost complete, whereas the similarity of meaning is only approximate.

It’s a game try, for which the Katzes deserve full credit, but does it work? Not quite. The Hebrew, though forced in some places and not entirely grammatical or coherent in others, at least has a consistency of tone; the English, on the other hand, achieves its homophony by combining artificial literary constructions (e.g., “Eye in moistening mode”) with street speech (“Who, nothin’ but Torah, / Who, make ’em, all o’ ’em) in an unconvincing mixture that isn’t helped by the archaic slang word “copasetic.” (Which indeed may derive from Hebrew kol b’seder — I wrote a column about it years ago.)

But we can’t all be Leon de Modena. Not even the distinguished American Jewish poet Louis Zukofsky and his wife Celia, who did a series of homophonic translations of the Latin poems of Catullus, managed to come close to the brilliance of “Mark This Lament!” In fact, the Katz brothers are more successful than the Zukofskys often were, as when the latter took a line like Catullus’s Nulli se dicit mulier mea nubere malle quam mihi, “My woman [the poet’s girlfriend Lesbia] says there’s no one she would rather marry than me,” and turned it into, “Newly say dickered my love air my own would marry me all whom but me.” There’s nothing copasetic about that.

When the Second Verse Is Same as the First in Hebrew