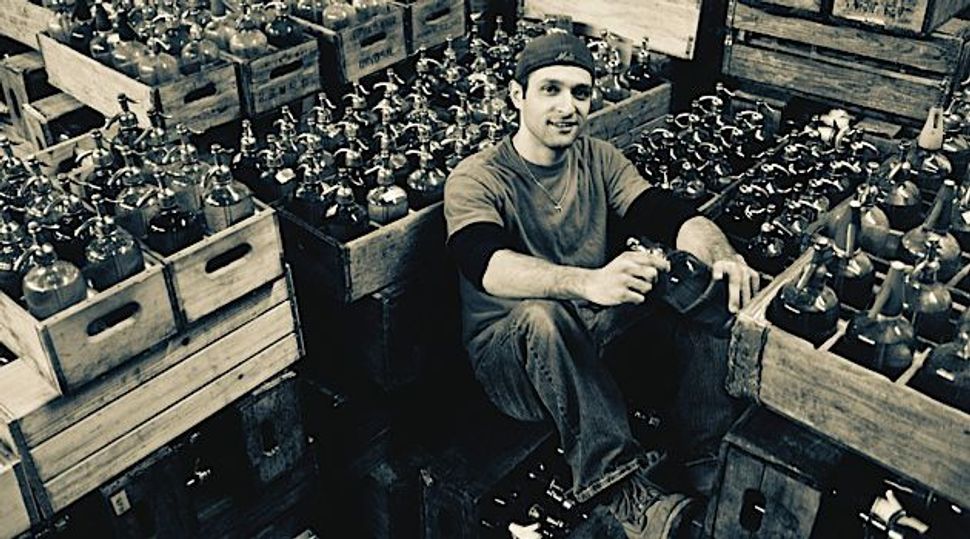 If you believe what you read in the news, the seltzer man is on the brink of extinction. Every few years, some publication will run a wistful feature on the remaining stock of old-timers, dedicated men who still ride around New York making door-to-door deliveries of carbonated water, their crates of glass siphon bottles clanging in the back of their trucks. But like the milkman and the roving knife sharpener, the glory days of seltzer delivery are all but over.

“When I started in the early 1980s, there were 22 seltzer men left in New York,” said Kenny Gomberg, co-owner, along with his brother-in-law Irv Resnick, of Gomberg Seltzer Works — the city’s last remaining seltzer filling station. “That was just a fraction of the hundreds there used to be,” he said. Today, there are just seven left.

But one of these seltzer deliverers, 25-year-old Alex Gomberg (Kenny Gomberg’s son), represents something new in the world of seltzer. Alex Gomberg is the fourth generation of Gombergs to peddle the drink once affectionately called “Jewish champagne.”

When his great-grandfather Mo Gomberg, a Russian immigrant, founded Gomberg Seltzer Works in 1953, the industry was thriving. And for decades it was buoyed by a generation of Jewish immigrants from Eastern Europe who brought their love of seltzer with them to America, and who relied on the seltzer man to bring the bubbly water to their doorsteps.

“The only advertising you used to need was a billboard with a picture of a seltzer bottle and a phone number,” Kenny Gomberg said. “For those who know what real seltzer is, the product sells itself.” But younger consumers who know only the version sold in plastic bottles at the supermarket need more convincing.

That is why Alex Gomberg, who recently earned a master’s degree in higher education administration, decided to leave academia to usher his family’s business into a new era. Last year he pioneered Brooklyn Seltzer Boys with his father and uncle, a seltzer delivery venture they call “the newest old business around.” Instead of seeking out individual home delivery customers (“I am not looking to step on anyone’s toes by taking over the remaining market,” he said), he focuses his energies on the artisanal restaurants and bars that appreciate the difference in quality between the plastic bottles that quickly go flat once opened and the bold, bracing bite of ultra-fresh seltzer spritzed from a pressurized siphon.

Already he has secured a number of clients, including the farm-to-table restaurant Brooklyn Sandwich Society and a speakeasy-style bar called Dutch Kills in Queens. “The business was stagnating and would have continued to dwindle,” Kenny Gomberg said. “The work Alex is doing to network and bring seltzer to a new market is amazing.”

And Gomberg is not alone in his efforts to put the fizz back in seltzer delivery.

Pittsburgh is home to Pittsburgh Seltzer Works, a fading 115-year old business that was brought back to life by two men, John Seekings and Jim Rogal. Kathryn Renz, meanwhile, runs Seltzer Sisters in the San Francisco Bay Area, a company she bought in 1992 from the former owners, who had decided to fold several months earlier. Further south, an Argentine named Gustavo Leiva has delivered siphoned seltzer bottles to residents and businesses in Southern California since 2007 through his company, Soda Buenos Aires. And last year in Florida, Ryan Pinnell founded Treasure Coast Seltzer Works, which delivers to businesses and to customers’ doors. “My wife is from Eastern Europe, where seltzer is a staple,” he said. “We saw that the delivery business had died off, and decided to see if we could take it to market.”

Unlike Gomberg, none of these modern day seltzer men and women has seltzer in his or her bloodline. But they share a desire to bring the drink into the 21st century. “These are people who have had seltzer conversion experiences,” said Barry Joseph, who runs the blog and podcast Give Me Seltzer and is writing a book about the drink’s history. “Now, they are redefining what traditional seltzer production looks like.”

Joseph points to a “confluence of emerging trends and subcultures” to explain old-school seltzer’s contemporary popularity — everything from the do-it-yourself culture and the artisanal foods movement to the Internet. “Take Pittsburgh Seltzer Works,” he said. “Just like food trucks, they are using Facebook to communicate directly with customers about what is new and where to find their product. It brings that level of direct connection you would find with older mom-and-pop businesses into the modern age.”

They are also widening their customer bases beyond the Jewish community that has been, and continues to be, a seltzer stronghold. “We market seltzer as a healthy alternative to soft drinks, and our fastest-growing demographic right now is moms,” Pinnell said. Like the Brooklyn Seltzer Boys, many of these companies are also increasingly partnering with businesses. Renz said that Seltzer Sisters currently serves close to 200 California bars and restaurants between Oakland and San Francisco. “They are great and consistent clients, and we love seeing the old glass bottles used and appreciated in a setting that shows them off,” she said.

The feeling seems to be mutual. In Brooklyn, the upscale bar Tooker Alley recently started using Brooklyn Seltzer Boys seltzer in their handcrafted cocktails. “Alex brought us a case to sample, and we were hooked,” said co-owner Del Pedro, whose former roommate used to have seltzer delivered to their Harlem apartment in the 1980s. “The bubbles are so powerful, they dance on your tongue. It is far more refreshing than anything you can get out of a bottle or soda gun.”

Joseph also thinks that the rise in popularity of home carbonation systems like Soda Stream have ultimately helped the modern seltzer man more than it has hindered him. “It is all part of the same movement and helps open up people’s awareness,” he said. “One of the seltzer men I interviewed said every time Soda Stream advertises locally, he gets more calls.”

It is probably premature to claim the emergence of a full-blown “seltzer man” revolution, and yet it is clear that something exciting is bubbling. “When I started researching seltzer’s history seven years ago, most of these companies did not exist in their current form,” Joseph said. “Now, fascinating people around the country have come out of left field and put themselves front and center into the story of seltzer’s revival.”

Leah Koenig is the Forward’s food columnist, and is working on a cookbook, “Modern Jewish Cooking” (Chronicle, 2015). Email her at [email protected]