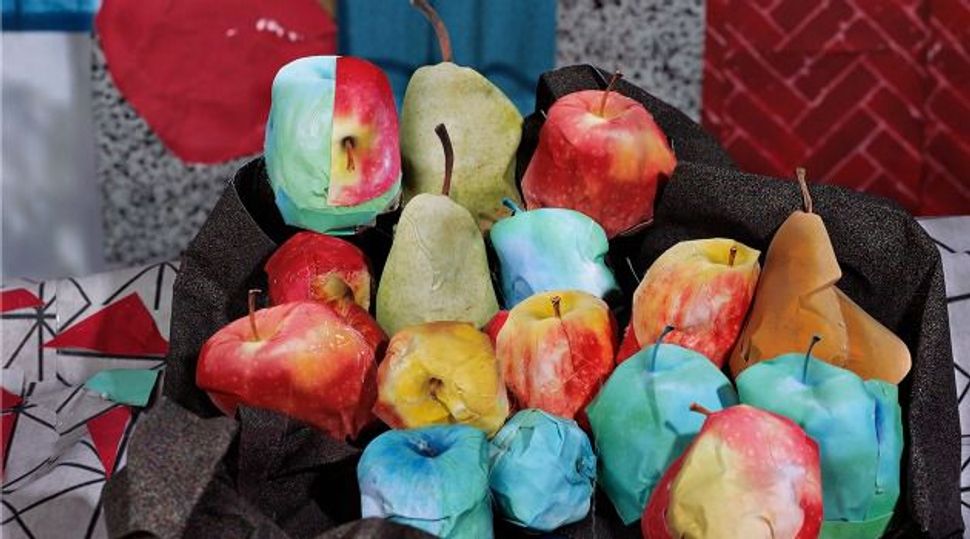 Not So Forbidden Fruit: Daniel Gordon?s ?Pink Ladies and Pears? is on display at Untitled as part of the ?Jew York? exhibition. Image by Courtesy of Untitled Gallery

On the wood-framed doorway of the gallery Untitled, on the Lower East Side of Manhattan, hangs a mezuza. It’s small, unassuming, something you wouldn’t necessarily notice if not for the title of the exhibition inside: “Jew York.” But it turns out that the mezuza wasn’t installed for the show; it’s been there for years, since before the gallery moved into the space — only now its presence is more appropriate than ever. New York Jewish cultural identity is inexorably tied to the Lower East Side, so the location is a natural fit. Organized by Untitled and by Zach Feuer’s eponymous gallery in Chelsea and split between the two, the jam-packed survey exhibition features works by nearly 90 artists.

Beyond the mezuza at Untitled reside pieces by such stalwart names as Sol LeWitt, Marc Chagall, Alex Katz, Diane Arbus and Leon Golub, along with contemporary standouts, including Mika Rottenberg, Jon Rafman, Judith Braun, Betty Tompkins and Lisa Oppenheim. Some of these pieces are excellent, but nearly all the work is two dimensional, the majority of it hung at a uniform height around the walls of the back room. It is, in a word, boring.

Whoever arranged the show (I was told that it was a “collaborative effort between gallery directors”) obviously has a good eye: Formal and thematic connections emerge easily between works. The deep blues and occasional bright reds of Chagall’s gouache and oil “Le Peintre au Chevalet a Saint Paul”(1979), for instance, are echoed by Daniel Gordon’s adjacent collaged and photographed still life, “Pink Ladies and Pears” (2012), whose colors and forms seem to be abstracted into the next work, Greg Goldberg’s lovely gouache (back to Chagall) “NYC May 23” (2013). But the selection of primarily 2-D work and the straight-at-eye-level hanging of it all bury the art in monotony, as does the excessively serious tone. Even Barbra Streisand, whose face appears in two different pieces at Untitled, knows when to break up her trademark schmaltzy earnestness with humor. In this context, the lone sculpture in the room — Jennifer Rubell’s worn brown sofa, titled “My Shrink’s Couch” (2012) — turns from a one-liner into a welcome site of relief.

The situation at Zach Feuer is completely different, a change that’s obvious before you even walk in the door. From the street a selection of pristine and colorful men’s suits, shirts and ties are visible inside, arranged as though on view in a shop. And they do make up a shop of sorts: For his contribution to the exhibition, “#samy2013” (2013), Joel Mesler (co-owner of Untitled) invited Lower East Side menswear dealer Sammy Gluck to sell his wares. When Gluck attended the opening, he sold at least six suits.

Mesler’s clever appropriation of life as art sets the tone for the rest of the Zach Feuer show: playful, sharp and never too self-serious. I’m not sure the overall quality of work here is any higher than at Untitled, but the curation is infinitely so. A wide range of media, including painting and photography, sculpture, embroidery and video, serves the art well, and while thematic and formal connections are still established — a corner given over to Philip Guston, Nicolas Guagnini and Judith Bernstein is especially excellent— individual pieces have more room to breathe. Even a small salon-style grouping in the second room seems to draw out its works through contrast: A bright abstraction by Joanne Greenbaum plays off a crowded and folksy figurative etching/collage by Joyce Kozloff, whose colors are revisited in Sara Greenberger Rafferty’s ethereal gum bichromate (a 19th-century photography printing process) triptych portrait of Woody Allen. The show at Zach Feuer also contains a healthy dose of humor, the element mostly missing at Untitled. Video contributions by Tamy Ben-Tor and Dina Seiden are unsettlingly funny and strange, while Jamie Sneider riffs on the classic bikini or Playboy calendar with “The Year of the Jewish Woman” (2009), whose cover features the artist oiled and nearly naked, wearing a massive gold “Esther” necklace and tiara.

If there’s one lesson to be drawn from “Jew York,” then, it may be that humor is crucial to Jewish identity. But I’m not convinced there is a lesson to be drawn, and I suspect the organizers intend it that way. “We live in a time of survey exhaustion,” they write in the press release. “There’s no ethnic group that hasn’t been neatly encapsulated, no far-flung city that hasn’t been given a biennial to host.” Then, of course, they go ahead and survey anyway. The endeavor is tongue-in-cheek from the start, its futility written into its premise. Jewish artists are abstract painters, performers and everything in between; some are concerned with Judaism, others with art history and the art world, still others with politics or personal life.

Luis Camnitzer, in the letter that constitutes his contribution to the show, calls “Jew York” “an artificial and anecdotal grouping irrelevant to the work of most artists invited….” But whereas Camnitzer goes on to characterize it as “tinged by an aroma of weird fundamentalism,” I’d say, rather, that it does a clever job of pointing to the fundamentalism of others, as well as to ours when we’re dealing with religious or ethnic groups foreign to us. There’s absolutely nothing to make these artworks fit together beyond their individual qualities and the curators who’ve installed them. That is entirely the point.

Jillian Steinhauer is a senior editor of the art blog Hyperallergic and a freelance writer living in Brooklyn.