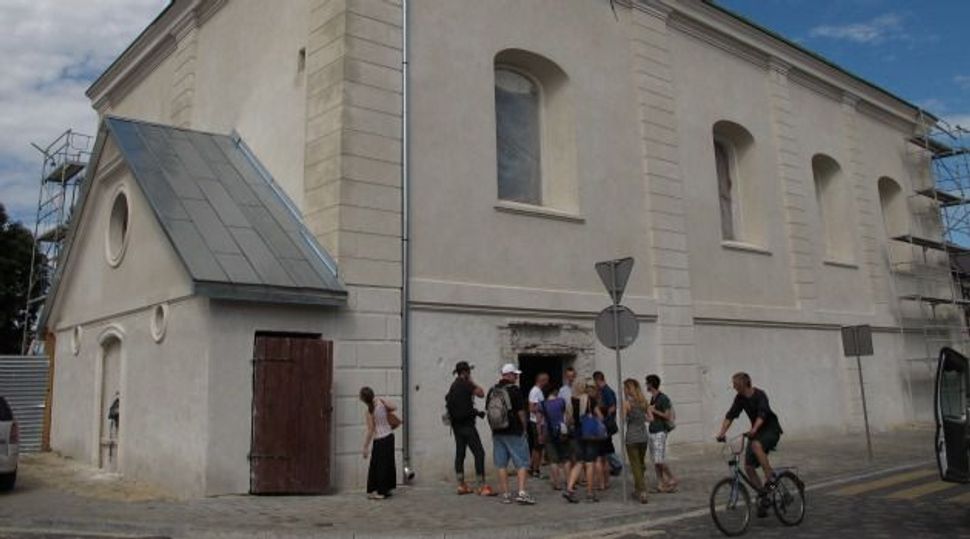 About 15 years ago, when he was in his mid-20s, Piotr Krawczyk had a revelation that changed his life; in many respects it also ended up changing the life of Chmielnik, the sleepy little town in South Central Poland where he lives.

“I found a book on the history of Chmielnik, and I read it,” Krawczyk, a round-faced man who exudes enthusiasm, told me when I visited Chmielnik, which is about 100 miles southeast of Warsaw. “But I found scarcely any information about Jews, and I remembered that my grandparents told me that before the war, there were a lot of Jews here.”

So, he added, “I started going to the archives, finding documents, and I found a lot. No Jews live in Chmielnik now, but before World War II they were about 80% of the population. The history of the Jews here is the history of the town.”

This recognition sent Krawczyk on a journey to put Jewish history, Jewish memory and Jewish heritage back both on Chmielnik’s map and in the town’s self-awareness.

Working closely with Mayor Jarosław Zatorski and other town officials, Krawczyk has been a driving force behind a remarkable series of initiatives encompassing education, commemoration, outreach and tourism.

He was instrumental in founding Encounters With Jewish Culture, a Jewish culture festival held annually since 2003. He wrote the first book devoted to Chmielnik’s Jewish history, published in 2006, and organizes programs for school children; he spearheaded contacts with Holocaust survivors from Chmielnik and with descendants of local Jews, and he worked to preserve the remnants of Chmielnik’s devastated Jewish cemeteries and to erect a Holocaust memorial.

All this has changed the way many people think about their town and local identity. Even a decade ago, Krawczyk says, some people were wary about reopening a chapter many had believed was closed. “The first time we had the festival, some people were saying, ‘What will happen if Jews return and take their houses back?’” he told me on one of my earlier visits to Chmielnik. “Now, people ask when the next festival is going to take place. They can’t wait.”

This summer, the most ambitious project to date is coming to fruition: the completion of the restoration of Chmielnik’s long-derelict synagogue and the opening there of the Świętokrzyski Shtetl Education and Museum Center dedicated to Jews and Jewish history in Chmielnik and elsewhere in surrounding Świętokrzyski Voivodeship, or Province. Funding for the $3 million complex, which will include a theater and a research center, as well as a separate Holocaust memorial, came from the European Union and from city, state and regional authorities.

Similar to the much bigger and much more publicized Museum of the History of Polish Jews, in Warsaw, “it will be a modern, interactive museum. We want to show what Jewish life was in this region before the war,” Krawczyk told me.

Originally built in the 1630s but reconstructed in later centuries, Chmielnik’s synagogue is a massive masonry building with barrel vaulting. It had long stood as a crumbling, silent witness just a few blocks north of the town’s market square. The Nazis had turned it into a warehouse, but its ravaged interior still retained traces of 18th-century stucco and graceful polychrome frescoes, including the wheel of the Zodiac. The first time I visited, when I began documenting Jewish heritage sites in Poland in 1990, I found graffiti covering the inside walls, and the name “Hitler” was scrawled on the exterior.

Over the past decade, the building was cleaned up to serve as the venue for the annual Jewish culture festival and other events.

For the new museum, conservators have painstakingly restored only the fragments of the frescoes that had survived, enabling the repaired walls to bear witness to the past destruction.

The museum’s structural design is centered on a large metal cube that occupies much of the sanctuary. This encloses the transparent, full-scale reproduction in tempered glass of the destroyed bimah, which is designed to emit light.

Carried out by Nizio Design International, which is also currently producing the core exhibition of the Museum of the History of Polish Jews, this installation is called the “House of Light.”

Its roof, partially constructed of glass, is joined to the women’s gallery and will form a small auditorium and exhibit center for concerts, lectures and other events. Elements of the core exhibition, including a series of pre-World War II photographs, will be installed in the spaces between the cube and the walls of the sanctuary.

One of the key features of the complex will be digital research facilities, including a planned multi-media genealogy center. This results from an agreement reached in June, under which the district archives in nearby Kielce will supply the center with scans and other electronic copies of archival documents from more than 100 towns and cities in the region.

The Świętokrzyski Shtetl Center was officially inaugurated in mid-June, during the annual Encounters With Jewish Culture festival, with a gala ceremony attended by local dignitaries, townspeople and a number of Holocaust survivors and descendants of Jews from Chmielnik. These included Israel’s deputy ambassador to Poland, Nadav Eshcar, whose maternal grandmother immigrated to Palestine from Chmielnik before World War II.

The museum’s core exhibition and other facilities, however, will not be functional until the beginning of September.

Even so, Krawczyk told me as he led me through the unfinished exhibition installation and public spaces in July, Jewish sites in Chmielnik already attract some 5,000 to 7,000 visitors a year. The town is a regular stop now on “shtetl route” Jewish heritage trips out of Krakow and on study trips such as those organized by the Auschwitz Jewish Center, a Jewish educational facility in Oswiecim.

As a result of the interest, Chmielnik’s first hotel opened earlier this year. And a Jewish-style restaurant called Cymes (Tsimmes), with a décor cluttered with candlesticks and carved Jewish figurines, clearly modeled on the Jewish-style restaurants in Krakow’s Kazimierz district, operates on the market square.

Its menu features hummus, cholent, kugel, chopped liver and roast goose. And it also features a lengthy text recounting the Jewish history of the town.

I found Cymes to be a low-key place with a friendly staff. I might even go so far as to call it haimish.

When I stopped there for a plate of pipki (goose gizzards) and “Jewish pierogi” (dumplings stuffed with kasha and mint) after touring the synagogue with Krawczyk, I overheard the mother of the family of Polish tourists at the next table carefully reading out the menu’s Jewish history text to her children as they waited for their meal.