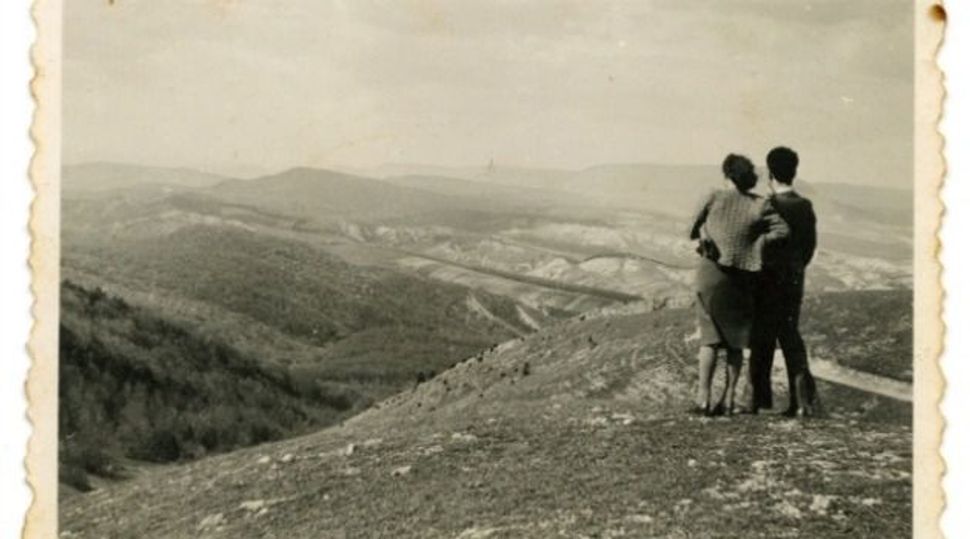 ZIonist Heroine: Hannah Senesh, accompanied by a friend, looks out on a vista in Palestine. Image by Courtesy of the Senesh Family

Hannah Senesh was a young Hungarian poet and diarist who was captured and executed November 7, 1944, at age 23, by military police after parachuting into Yugoslavia and then entering Hungary to try to smuggle Jews out of the country. Many know of her brave act of enlisting with the British army and the Haganah, and of her beautiful lyrical poem “Walking to Caesarea.” Indeed she is an Israeli heroine, buried on Mount Herzl, but few know the personal side of Senesh, which is powerfully revealed in “Fire in My Heart: The Story of Hannah Senesh,” now showing at the Illinois Holocaust Museum & Education Center, in Skokie, Ill.

What is remarkable about the exhibit, originally shown at New York’s Museum of Jewish Heritage, is its intimate feeling. Through ordinary objects from Senesh’s life, photos from her childhood and adolescence, and excerpts and pages from her diary and her letters, we become privy to her private life — to the “fire in her heart,” which we see as not just a fire to become a Zionist, but also as a fire to find meaning in her life, and as a fiery, passionate love for her small family.

The exhibit begins with three screens, on which images are shown of ordinary life in Hungary at Senesh’s time. The images suggest one of the exhibit’s major themes: that, though she may have begun her life as a seemingly ordinary girl, Senesh became heroic through the choices she made when confronted with the war and the Holocaust.

The exhibit is a testament to the power of a few well-chosen ordinary objects — Senesh’s first diary, her typewriter — to represent a person’s whole life. Each object is almost like a poem: symbolic and elegant in its beauty, and far more illustrative of Senesh’s interior life than her published poems actually are.

We observe Senesh’s evolution into a courageous woman who gave up her life for the cause of trying to save her fellow Jews, while we can also hear her vulnerable voice as the ordinary young woman who yearns for her mother. Studying at a girls’ agricultural school in Palestine, drawing optimistic sketches of chickens, she writes in her diary, “I would so like to talk a bit with Mother,” and, “When I meet someone new, I wonder what Mommy would say.”

The bond between mother and daughter was so powerful that her mother devoted the rest of her life to tending to her daughter’s words and publications, just as Otto Frank devoted himself to the publication of Anne Frank’s diary.

At times I felt as though the exhibit was a love story of a mother and daughter: When she crosses the Hungarian border to immigrate to Palestine during the war, Senesh writes to her mother, “I felt only the pain of parting from you.” When she leaves Palestine to cross the border into Hungary, she writes: “My dear Mother, in a few days I will be so close to you — and so far. Forgive me, Mother, and try to understand me. A million hugs, Anny.”

Senesh’s yearning for her brother, Gyuri Senesh, and mother was so strong that it seems inextricably linked with her decision to risk her life to save Jews in Hungary.

“I think a lot about Gyuri and also about Mother out of fear and a terrible lack of faith: who knows if I will see them again, and when?” she wrote in her diary. “At such moments I feel an overwhelming obligation to do something great and important for the Land of the kibbutz, that will at least justify the sacrifice of having abandoned them.” Perhaps it was her painful separation from them that led her to take such a physical risk, to find some meaning in the separation.

It’s amazing to see in the exhibit a facsimile of the exact page from Senesh’s diary where she commits herself to writing only in Hebrew before she emigrates: On that page from her diary on June 18, 1939, the top two lines are in Hungarian and the rest are in Hebrew. It’s as if we are seeing her passionate decision to commit herself body and soul to making her home in Palestine encapsulated in that very page. (Sadly, we see her write in Hungarian again in her last days, captured in prison, returning to her mother tongue when she knows death is near.)

Another particularly noteworthy object is a photo of Senesh and her brother. She was about to go to Egypt for training to be in the British army when she heard that her brother was finally in Palestine. After having been separated from him for years, she had only 24 hours to spend with him. A street photographer took their picture and sent it to Gyuri Senesh. On the back, in Hebrew, her brother inscribed, referencing a famous psalm, “How good and how wonderful it is for siblings to be together”; he sent it to his sister in Egypt. Hannah then wrote, “How good” in Hebrew, and sent it back to him. This photo becomes a palimpsest of sibling love. The photo was found in her brother’s desk drawer upon his death in 1995.

At the end of the exhibit, a video interview with Hannah Senesh’s fellow kibbutzniks shows one elderly man saying that he didn’t want Senesh to be a martyr, that he and his friends just wanted to grow old with her. After witnessing the warm, vivacious young woman come alive in these rooms — the ordinary Hannah Senesh, and the heroic — we understand just what he means.

Laura Hodes is a frequent writer for the arts and culture section of the Forward.