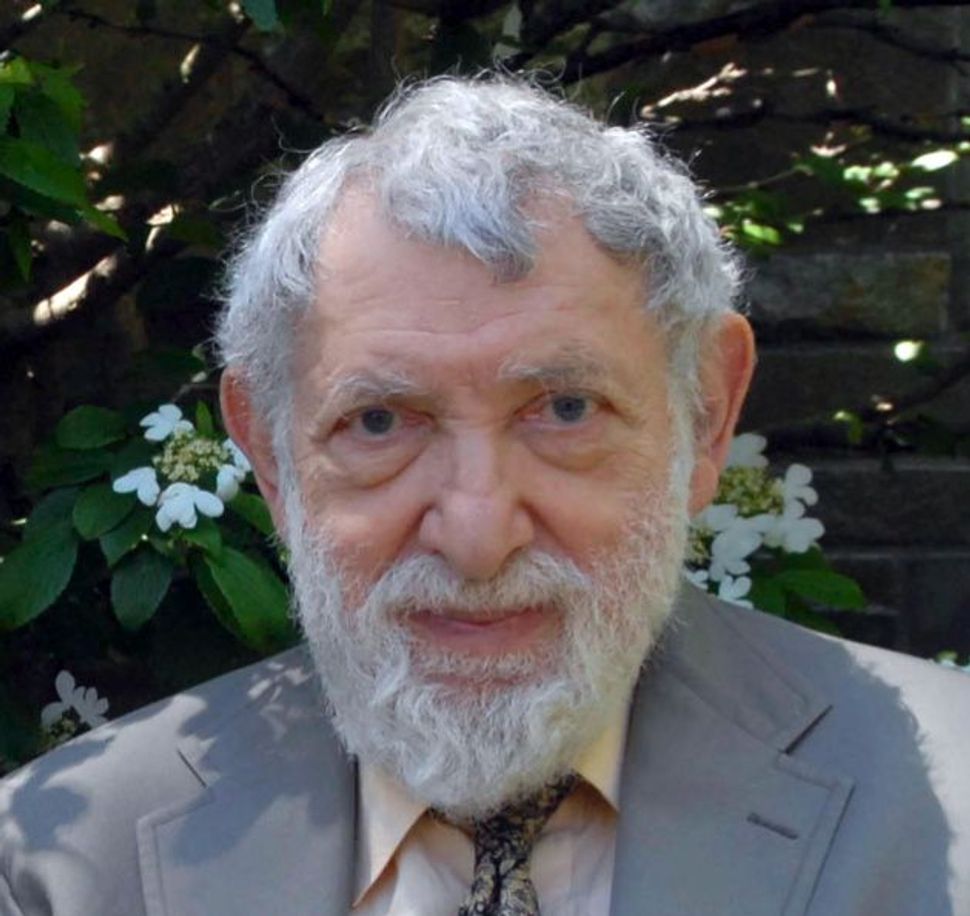 Image by Courtesy of Yale University

The American Jewish poet John Hollander died on August 17 at age 83. At a 1990s New York literary gathering, I praised his translation of a poem by Jorge Luis Borges, “The Golem.”. Hollander demurred modestly, not adding as he did to the poet Edwin Honig in 1985: “My mother’s family traditionally believes that my mother’s father’s family is descended from the Rabbi of Prague about whom the golem stories have circulated.”

Hollander’s mother Muriel Kornfeld and his father, Franklin Hollander, were German-speaking Jewish immigrants who prized culture, and their son followed suit. Although Yiddish was not spoken at home, Hollander would later translate poems by Moishe-Leib Halpern for Irving Howe and Eliezer Greenberg’s beloved “Treasury of Yiddish Poetry” (Schocken). In 1985, Hollander told The Paris Review: “My family was somewhat observant — that is, I grew up in a kosher household, and I was taught some Hebrew, and my parents, both of whom were enlightened freethinkers in some senses, made some deliberate commitment to maintaining traditions of observance because they believed in so doing. And remember, I grew up during the Hitler period and during World War II, when it became important for all sorts of other reasons to affirm these things. When I got to college, I drifted completely away from religious observances, not rejecting it, but simply ignoring it.” In fact, an abundance of Jewish writers flourished at Columbia University when Hollander arrived there after studies at the Bronx High School of Science. They included fellow student poets such as Allen Ginsberg, Louis Simpson, Daniel Hoffman and Richard Howard, as well as professors Lionel Trilling, Moses Hadas and Meyer Schapiro.

Hadas, a noted classicist, informed Hollander, then aged seventeen, that he “oscillated… between being seven and seventy.” Throughout his career, Hollander would alternate between boyish exuberance, as in “Jiggery-Pokery: a Compendium of Double-Dactyls,” (1966) featuring a light verse form invented with his friend the poet Anthony Hecht, or the ludic “Types of Shape” (1969), with poems typed in the forms of swans or umbrellas, and precocious maturity, as in “A Crackling of Thorns” (1958), chosen by W. H. Auden for the Yale Series of Younger Poets. In “The Question of American Jewish Poetry,” (1988) an article for “Tikkun,”, Hollander revealed that the title of his first collection was inspired by a “text from Ecclesiastes that I had always liked — ‘As the crackling of thorns under a pot, so is the laughter of a fool.’” Hollander was particularly struck by a “midrash” on the text, stating “that ‘when all other woods are kindled, their sound does not travel far; but when thorns are kindled, their sound travels far,’ as though to say: We too are wood… Midrash came through to me in my childhood, not from formal study (I was never anywhere near a yeshiva), but from the Pesakh seder. Even in early childhood, I was made to grasp the fact that the annual scene of rejoicing and remembering was also the scene of interpretation. For me, that may have been an important poetic scene of instruction as well. Over the years I’ve returned to both the rhetorical form and the interpretative strategy of midrash from time to time.”

Hollander would also return to collaborative ventures, such as writing texts for vocal works by the American Jewish composers Milton Babbitt, George Perle and Hugo Weisgall, and for “The Death of Moses,” an oratorio by the British Jewish composer Alexander Goehr. Hollander’s passion for collaboration and fellowship was tied in with his most profound artistic concerns, and so among his closest friends was the Romanian-born artist Saul Steinberg. Hollander’s first wife, Anne Loesser Hollander, daughter of the eminent pianist and author Arthur Loesser, is an accomplished art historian. Hollander’s second marriage was to the sculptor Natalie Charkow, whom the usually tetchy art critic Hilton Kramer has praised for her “gift for sculptural narrative, which can hardly be said to exist elsewhere in modern sculpture.”

With such a domestic narrative, small wonder that among the anthologies which Hollander edited is “Marriage Poems” (Knopf, 1997).. Hollander’s other such compendia were equally pleasure-based, such as his “Committed to Memory: 100 Best Poems to Memorize” (1996) and “Rhyme’s Reason” (1981, with revised editions in 1989 and 2001). The latter is a virtuoso turn in which poetic forms are explained in poems written by Hollander for the occasion. Ever the craftsman, in his “Tikkun” article Hollander declared that “both poetry and Jewish identity are forever condemned to being misunderstood, to being wrongly interpreted,” adding that “for me, the account in Bereshit about Jacob’s wrestling match seems a central fable of poetry.… The only strength one has to wrestle with is the power of one’s own language.”