May You Be Inscribed in the Book of Life for 5774 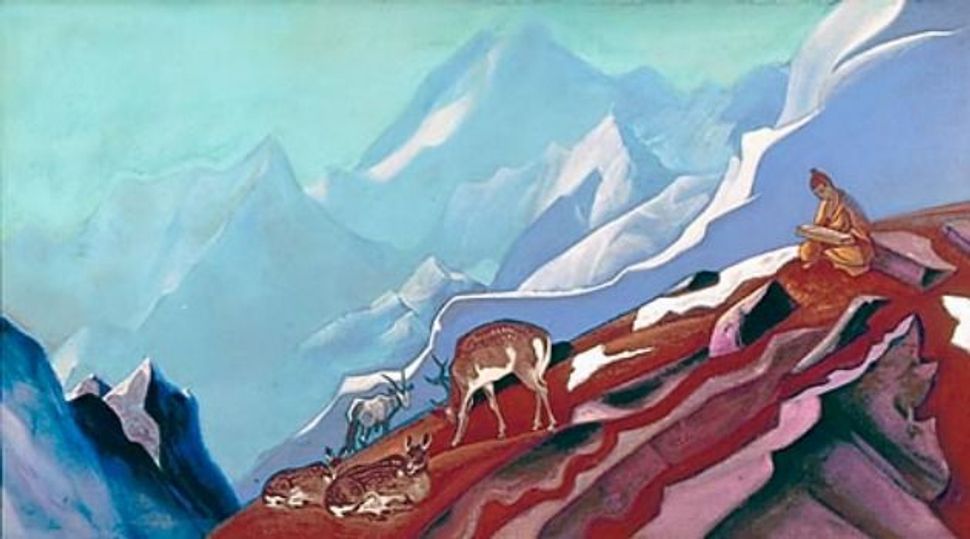 People of the Book: In 1935, artist Nicholas Roerich offered his vision of the ?Book of Life.? Image by Wikimedia Commons

Kotvenu b’sefer he-ḥayyim, “Inscribe us in the Book of Life,” Jews pray in the days from Rosh Hashanah to Yom Kippur. “May you be written down and inscribed for a good year,” they say to each other. No concept or phrase is more associated with the High Holy Days than that of a divine “book” in which our fates are written. But where does this come from? What are its origins in Jewish tradition?

They’re very old. We first encounter them in the story of the golden calf in the book of Exodus. In his rage at the Israelites’ reversion to idolatry while he has been in seclusion on Mount Sinai, Moses has the statue of the calf made by them ground to dust, and he orders a massacre of its worshippers. Yet having done all this, he beseeches God to forgive Israel’s sin and requests that if He doesn’t, He should “erase me, I pray, from Your book that You have written.”

What book is this? The Bible hasn’t mentioned it before. Does God keep some sort of ledger or log in which He records men’s deeds? Why, then, haven’t we heard of it until now?

Actually, the Israelites of Moses’ age probably had heard of it, because the motif of such a book was part of the shared religious culture of the ancient Middle East. Thus, in the Babylonian-Sumerian epic of Gilgamesh, Gilgamesh’s friend Enkidu has a vision in which he sees Ereshkigal, Queen of the Underworld. Kneeling before her is her secretary, Beletseri, the Underworld’s official scribe, “reading aloud from a tablet in her hands.” From other Babylonian sources, we know that this “tablet” (Babylonian documents, as I observed in a recent column, were incised with a stylus on a slab of wet clay and baked for preservation) was a record of the lives of new arrivals in the Underworld whose fate Ereshkigal had to decide. The Babylonians’ word for such a tablet was egertu, a cognate of the Hebrew igeret, which denotes a scroll or scroll-like letter. (Important Hebrew documents, unlike Babylonian ones, were generally written with ink on parchment that was rolled into a cylinder and sealed. If the igeret was long enough, it was called a sefer, a book.)

BelEtseri reports to Ereshkigal on the lives of the newly dead, but in other ancient Middle Eastern texts there is mention of divine dossiers being kept on lives still in progress. In the excavated archives of the powerful Sumerian king Rim-Sin of Larsa, to take one example, there is a letter wishing him a long and happy reign guaranteed by the gods in the “book of life [im-ma-til-la].” Rim-Sin was a contemporary of the Babylonian king Hammurabi and lived early in the second millennium BCE, 500 or so years before Moses.

When Moses, therefore, asks to be erased from God’s book, he is talking about a Hebrew version of the Babylonian-Sumerian “book of life,” although it is not quite clear whether he asking to die or simply to be relieved of the role God has cast him in and forgotten. Other biblical passages also state or imply that God records his plans and judgments in a book, but the actual phrase sefer he-ḥayyim occurs in the Hebrew Bible only once. This is in the 69th Psalm, whose author requests that his enemies be “erased from the book of life and not listed with the righteous.” Apparently, this book was conceived of as being for the righteous alone; the files on the wicked were kept somewhere else.

A “book of life” is also mentioned in the apocryphal book of I Enoch, a second-century BCE Hebrew visionary work that survived only in an Ethiopian Christian translation. In it, implored by “the saints in heaven” to remember “the righteous whose blood has been spilled,” God is described as sitting on “His glory seat, the books of life opened before him and all the heavenly hostS standing by.” And in the New Testament book of Revelations, written in Greek in the late first century C.E. and clearly influenced by Enoch, there is this description:

“And I saw the dead, small and great, stand before God; and the books were opened; and another book was opened, which is the book of life; and the dead were judged out of those things which were written in the books, according to their works…. And whosoever was not found written in the book of life was cast into the lake of fire.” Here, too, the book of life is only for the righteous; the sinners are listed in other books. This was also the opinion of the ancient rabbis. In the talmudic tractate of Rosh Hashanah, we find it written: “Three books are opened on Rosh Hashanah: One for the totally wicked, one for the totally righteous, and one for those in between. The totally righteous are at once inscribed and sealed for life, the totally wicked are at once inscribed and sealed for death, and the in between are left in suspension.”

May You Be Inscribed in the Book of Life for 5774