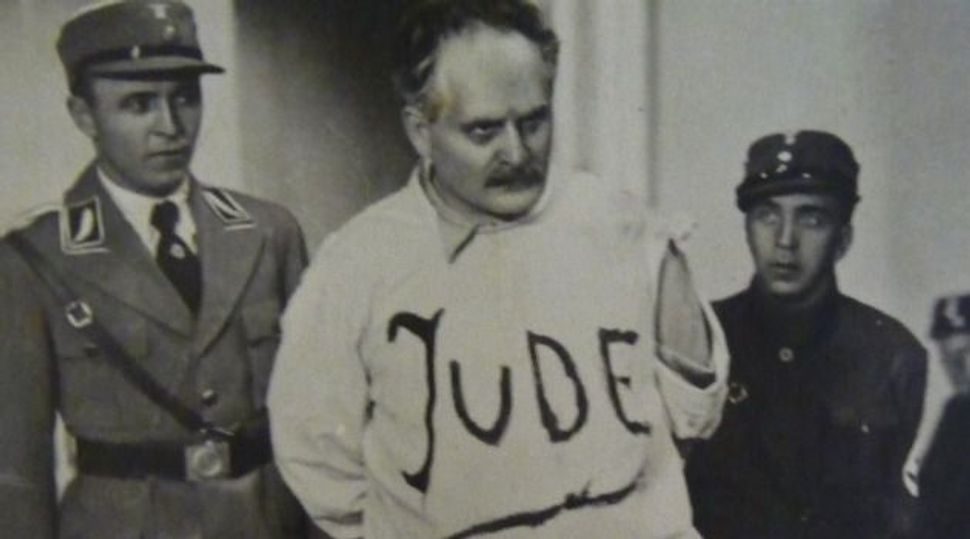 Gray Areas: Olga Gershenson has unearthed a number of Soviet films that dealt with the fate of Jews during WWII. Among them was the film ?Professor Mamlock.? Image by Courtesy of Olga Gershenson

As a teenager growing up in Ufa, Russia, I used to play piano in a Jewish music ensemble. Our group was once invited to play a prescreening concert at a local movie theater called Rodina (Motherland), built in 1953 in Stalin’s Empire style, giving it the appearance of a palace; it had a stage for musical performances in the foyer.

Our performance, which the audience appreciated and for which we were paid our first fees for creative work of any kind, was the opening act for the screening of “Schindler’s List.”

My musician friends and I were sure we were doing our part to help the public acquire consciousness about the Holocaust in that early post-Soviet moment, when the discussion of this subject, among other long-repressed historical facts, was permitted for the first time. Spielberg’s film, however, ought not to have been the film that introduced Russian audiences to the subject of the Holocaust, as Olga Gershenson’s pioneering book on the history of Holocaust representation in Soviet cinema suggests.

Gershenson, who is an associate professor of Judaic and Near Eastern studies at the University of Massachusetts Amherst, notes that Spielberg’s film is indicative of larger ways in which the Holocaust is treated in Western cinema. Namely, this film — like many other Holocaust films — emphasizes the experience of those who suffered and died in Auschwitz or in other concentration and death camps and consequently ignores the deaths of nearly half of all victims of the Holocaust who were rounded up and gunned down on Soviet territory before death camps, all of them located outside the borders of the USSR, were even operational.

Our visual vocabulary of the Holocaust — “emaciated bodies, striped uniforms, barbed wire, crematorium ovens, and mounds of personal effects,” as Gershenson summarizes it — is largely informed by the history of Western representation of the catastrophe.

This glossing over of the destruction of a large part of European Jewry in Western cinema goes along with the Soviet Union’s own lack of engagement with the deaths of a large portion of its Jewish population. Though Soviet cultural policies varied during both World War II and afterwards, Soviet censors in the postwar period were largely unwilling to allow the representation of the destruction and suffering of Soviet Jews qua Jews. Preference instead was given to representations of the suffering of the whole Soviet people during the German occupation (27 million are estimated to have been killed).

Soviet unwillingness to engage with the subject of the Holocaust did not, however, mean its complete absence from the screen. Many films were made, often with significant modifications to their directors’ plans, while many others were neither completed nor even put into production. Gershenson compares scripts with finished films, digs through the minutes of discussions about both, reads scripts and proposals that were never turned into films, and talks with directors and screenwriters who are still alive, and with the descendants of those who have already died. As a result, the author uncovers and elucidates the existence of what she calls “the phantom Holocaust” in Soviet cultural history.

Gershenson’s work of tracing the contours of this phantom history is necessary in part because the issue of film production in the Soviet Union was fundamentally different from that of literary production. While both cinema and literature were affected by censorship, literature that tested the limits of permissibility could be written — and sometimes published — unofficially. To take the best-known example in the history of Soviet-era literary representation of the Holocaust, the manuscript of Vasily Grossman’s novel “Life and Fate,” which daringly compared the experience of Nazi and Soviet concentration camps, was confiscated by Soviet security services when Grossman misjudged the extent of the brief period of openness under the premiership of Nikita Khrushchev. As the manuscript was seized along with the typewriter ribbon used for its composition, Grossman was told that the book could not be published for two or three centuries (he died of cancer a few years later, in 1964). Later, however, a copy of the manuscript was successfully smuggled and published abroad, leading to translations into English and other languages.

But films could never be produced by directors alone: Individual directors had to work within a system of state funding, production and distribution with moving parts far more numerous than those involved in the creation of literary texts. The unique contribution of Gershenson’s scholarly project lies in following the trail that these cinematic phantoms left in a range of archives as well as in various Soviet-era publications that reviewed those films that ended up in release.

In her book, Gershenson identifies two trends in the Soviet treatment of the Holocaust, which she calls externalization and universalization. Externalization is the phenomenon by which the events of the Holocaust, when they turn up in Soviet films, are represented as having taken place outside the Soviet Union rather than on Soviet territory. Gershenson points us to a sequence in one of the best-known Soviet war films, “The Fate of a Man” (1959), in which a scene of the extermination of Jews is shot through the point of view of a Soviet soldier who ends up as a prisoner of war in a concentration camp. The Holocaust on Soviet territory being unrepresentable on Soviet screens at the time, the events depicted in the film, Gershenson suggests, could only be those that took place outside the USSR.

Universalization, in turn, refers to the practice of representing the suffering of Jews as if it were something that happened to a variety of groups rather than to Jews in particular. In other words, Jews in Soviet cinema tend to suffer as “peaceful Soviet citizens” — a common euphemism for Jewish victims in Soviet parlance — rather than as Jews. Gershenson presents evidence of how, as a consequence of this push to universalize the tragedy of the Holocaust, some films ended up being stripped of their Jewish characters during the production process. “Steps in the Night,” for example, a 1962 film, started out as a script based on a true story of an escape of 64 prisoners from the infamous Ninth Fort — a mass execution site of Jews and Soviet POWs outside Kaunas, Lithuania. Sixty of the prisoners were Jews, but ultimately, Jewish characters were transformed into a team that included representatives of different ethnicities.

Though Gershenson organizes her chapters in chronological order, the catalog of films would make for a confusing organizational principle to a reader unfamiliar with larger questions of Soviet cinema history. Gershenson addresses defining milestones of this history, such as Socialist realism (the aesthetic approach to literary and cinematic representation worked out under Stalin) and the Thaw (the period of liberalization following Stalin’s death), in passing, as they come up in the discussion of specific films. A more clearly conceptualized chronology would have been preferable — one that would have introduced the reader to the larger political and cultural trends first, thus enabling her to see how the questions of Holocaust representation worked within the ever-changing matrix of Soviet ideology.

In addition to the book, Gershenson has developed a companion website, www.phantomholocaust.org. Featuring key subtitled sequences from a range of films that she discusses in her book, the website is an invaluable resource that makes a number of Soviet films dealing with the Holocaust — in part if not in their entirety — available for the first time.

Among the liveliest parts of Gershenson’s book are the stories she tells about the process of researching it. In one instance, in one of the Russian archives, Gershenson gets her hands on a banned 1961 screenplay for a film called “Gott Mit Uns” (“God With Us”) and realizes that, because the sign-out sheet on the folder that tracks everybody who has ever checked it out is clean, she is the first person to have read the script in about half a century. One of the co-writers of the screenplay has already died, but Gershenson finds out that the other one, a Lithuanian-born Jewish writer named Grigory Kanovich, is alive and well in Tel Aviv. She flies to meet the astonished author at a Lithuanian resort. As it turns out, Kanovich thought that the screenplay had vanished in the 1960s. Accompanying Gershenson is her friend, the filmmaker Oleg Gaze; in Lithuania, Gaze gets a blessing from Kanovich to produce his 1961 script, and today he is securing funding for the project.

Through her research, Gershenson discovers that “Schindler’s List” flopped at the box office in Russia, despite the appeal my musician friends and I had expected it would have when we played a prescreening concert in the mid-1990s; however, her book unearths much about the history of the cinematic representation of the Holocaust beyond Hollywood’s iconic take on the subject, tracing — and occasionally breathing new life into — the phantoms that the Soviet cinema industry has left behind.

Sasha Senderovich is an assistant professor in the Department of Germanic and Slavic Languages and Literatures and in the Program for Jewish Studies at the University of Colorado at Boulder.