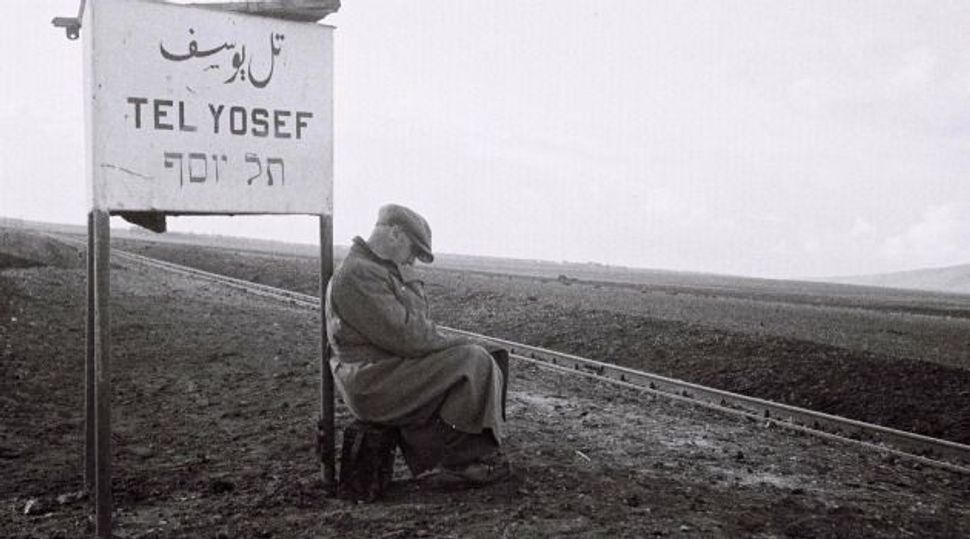 Trainspotting: In Israel, one can hear only a few hints of English as it was spoken in the days of British Mandate Palestine. Image by Getty Images

While waiting for a train in an Israeli station the other day, I was bemused to hear an announcement in English, following a similar one in Hebrew, that said, “Smokers are requested to smoke only in the dedicated area.”

I suppose someone meant “designated,” unless the announcement concerned dedicated smokers. This kind of thing isn’t uncommon in Israel, where many people seem to think that a passing grade on a high school matriculation exam in English qualifies them to compose public signs and make proclamations in the language without bothering to consult a competent native speaker.

A few minutes later, the same voice announced that the “front wagon” of the train now pulling into the station was restricted to ticket holders with reserved seats. In British English, a “wagon” is indeed a railroad car, but it is a freight car, not a passenger car, which is a “carriage.”

Could this be a mistake going back to the days of Mandate Palestine, when the English learned and spoken was the British rather than American variety? More likely, it was recently culled from a Hebrew-English dictionary by an employee of the Israeli train system.

And yet even if “wagon” isn’t one of them, contemporary Israeli Hebrew, which is bursting at the seams with Americanisms, does have a few vestiges of the English of the British Mandate. Anyone, for example, who follows Israeli soccer (the Hebrew term for which, kadur regel, is a translation of “football,” as the Brits stubbornly misname the sport to this day) knows that a penalty kick is a pendel.

Not that there isn’t a proper Hebrew expression for it, be’itat onshin, but try using be’itat onshin in a neighborhood pickup game, and you’ll be told to go back to teaching Hebrew literature. A pendel has been a pendel since Winston Churchill was colonial secretary, and if there’s more than one pendel, they’re pendelim.

Or take the Israeli word for a flat tire, which the Academy of the Hebrew Language will tell you is teker. Forget about that. A flat is a pancher, from British “puncture,” as flat tires have always been called across the Atlantic. Pancher is a Hebrew word that has been, as linguists say, quite productive, having spun itself off in various ways.

A man who fixes flat tires is, with the help of a little Yiddish, a panchermakher. His shop is a pancheriya. If your tire has gone flat, you say “Hitpancher li ha-galgal,” and the verb hitpancher can be used for anything that has gone wrong, as in “Hitpancher li ha-yom,” “My day’s been screwed up.” Pancher has even entered Israeli criminal slang as l’pancher: to stab, shoot or otherwise seriously deflate another party.

And then there’s tremp, Israeli Hebrew for a hitchhiked ride, from British “to tramp” — that is, to hike. Hitchhikers or trempistim, though still more prevalent in Israel than in other Western countries, are less common than in the past, but if I give a lift to a friend, that’s a tremp, too.

Nor, to go from verbal to sign language, does one thumb a ride, as one does — or used to do — in America. Rather, the trempist extends his arm horizontally from the shoulder, European style, with its open palm facing the oncoming driver, and leans slightly forward.

A jinji, from Mandate-period “ginger,” can be in Hebrew to this day anyone with light-colored hair. The feminine form is jinjit, and the masculine and feminine plurals are jinjiyim and jinjiyot. The word is particularly used for redheads, but I can remember more than once, in the days when I still had a full head of light-brown hair (which hasn’t been for a while), being called by it. “Halo, jinji!” — “Hey, you with the light hair!” — can be an effective way of hailing someone in a country of mostly dark-haired people.

Halo, “hey,” from English “hello,” is a British-Mandatism, too. It’s pronounced with the stress on the first syllable, which is probably also British influenced, as in British “hel-lo” — “Look at that!” or “What have we here!” But a shouted “hel-lo” is also used by the British to hail someone far-off whose name you don’t know. (“Haloo” or “haloa,” on the other hand, is a traditional cry for urging on one’s dogs in a foxhunt.)

Halo, uttered with a falling rather than rising tone, as “hello” is in English, can also be an Israeli way of answering the telephone. Yet it has a slight gruffness about it — a hint, as it were, of “Who’s bothering me now?” — that makes it less polite sounding than the more frequently heard “Shalom.”

There may be more Mandate-period English words in today’s Hebrew, but if there are, I can’t think of them. The British Mandate lasted only 30 years, and though educated Israelis continued to speak English with a British accent for quite a while afterward, that, too, is a thing of the past.

American English now sets the tone, as it does almost everywhere, and words like pancher and tremp are part of the little that is left from the days when Albion ruled the waves.