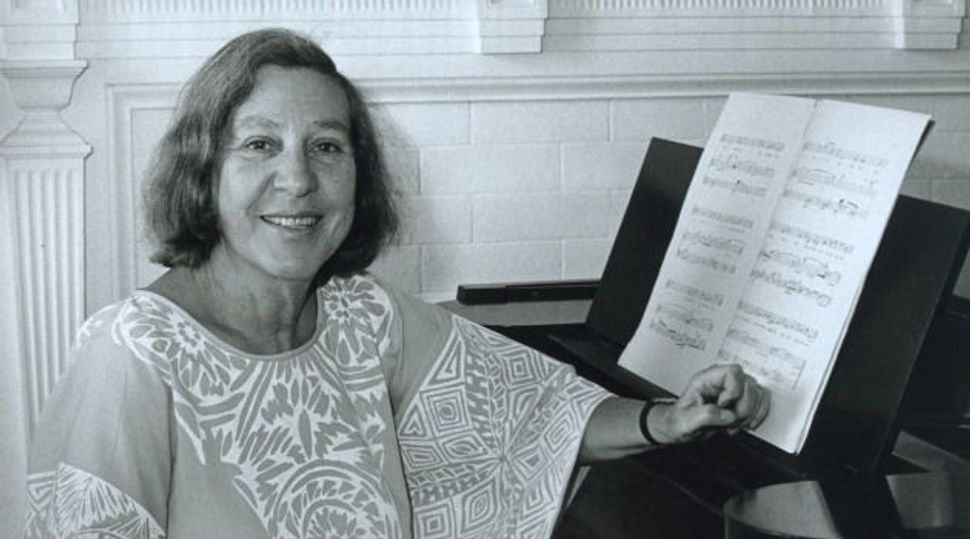 Closer to Fine: Aside from being a noted composer, Vivian Fine was also a beloved professor at Bennington College. Image by Courtesy of Peggy Karp

September 28 marks the centenary of Vivian Fine (1913-2000) a Chicago-born composer who was profoundly influenced by Yiddishkeit. As Fine, who died in 2000 at the age of 87, told the composer Elizabeth Vercoe in a 1992 interview, her mother came from a “Russian Jewish family and started to work herself when she was 14. But she knew that art and things of the intellect were important … The value of learning and acquiring knowledge is a very important value among the Jewish people.”

Despite her family’s poverty, at age 5, Fine insisted on having piano lessons. Her first teacher, a Miss Rosen, would hit Fine on the hand with a flyswatter if she played a wrong note. Fine escaped the flyswatter by taking classes at a local conservatory. At age 14, Fine found her local grammar school a waste of time, and stopped attending it. She later recalled: “My parents accepted this readily. They themselves were Russian Jewish immigrants who had not had the opportunity of going to school but had educated themselves. They didn’t associate education with school. There were, after all, such things as books. My mother once hid me in the closet when the truant officer came around.”

By her teens, Fine was already composing, and in 1934, her friend, the American pianist and composer Israel Citkowitz, urged her to study harmony with composer Roger Sessions. Around the same time, Fine also became the only female composer in the Young Composers Group formed by Aaron Copland. The group was formed soon after Copland wrote his “Piano Variations” and Fine, a skilled pianist, especially in modern music, helped proofread the new work. She recalled that Copland had her “sit down and he said, ‘You play it; don’t worry about the rhythm.’ So he was able to see what notes were wrong.”

Among Fine’s other admirers was the much-feared conductor George Szell, who taught her orchestration in 1943. Composer and critic Arthur Berger was another early fan of Fine’s work, which ranged from piano solos to chamber music and orchestral works. Although Fine never visited Israel, she acquired an increasing sense of her heritage and identity. By her later years, after a long career as a beloved instructor at Bennington College in Vermont, she began to express these feelings in musical compositions.

Fine shared a home in Hoosick Falls, New York, with her husband, the sculptor Benjamin Karp. There she wrote “Canticles for Jerusalem,” a song cycle for voice and piano to translated texts by Yehuda Halevi and Yehuda Amichai , and to passages from Psalm 137. Creating a tribute to Jerusalem as a spiritual center and symbolic home, Fine wrote passages for the pianist to pluck the strings inside the piano, to evoke Old Testament harps and other Middle Eastern clangorous sounds. The sinuously evocative and atmospheric work addresses the situation of the Diaspora artist.

Fine felt the musical message behind “Canticles for Jerusalem” so intensely that she created a four-movement instrumental version of this work, “Canticles from the Other Side of the River.” More than a mere transcription for orchestra of the earlier work, the instrumental version is a reinvention, in which percussion imitates sounds of nature, such as birdsong.

Another such example of an instrumental work engaged with Jewish tradition is Fine’s “After the Tradition,” an orchestral work in three movements. The title was inspired by a 1969 book by Robert Alter. The work’s first section, entitled “Kaddish,” was written in memory of the cellist George Finckel, a Bennington colleague for whom she also composed “In Memoriam: George Finckel” for four cellos. The San Francisco Chronicle praised a 1988 performance of “After the Tradition” as a “tribute to Fine’s Jewish roots.”

Fine’s chamber opera, “The Women in the Garden,” placed the American Jewish poet Gertrude Stein ( onstage with quintessentially bossy and tendentious know-it-all declarations, bending the ears of the other, more restrained female characters, including Emily Dickinson and Virginia Woolf. She also wrote “Songs of Love and War,” which included settings from the “Song of Songs” and by the Polish Jewish poet Jozef Wittlin.

A later chamber opera, the semi-autobiographical “Memoirs of Uliana Rooney,” with a libretto by Sonya Friedman, features musical quotes from Copland, Arnold Schoenberg, Kurt Weill and Alma Mahler. It tells the story of a piano prodigy from a Russian Jewish family who becomes a composer. Sweeping through 20th century political history and subtly raising questions about the role of women composers in modernity, the opera ends with words attributed to Primo Levi: “Time can make us famous, / time can make us fools, / and so the best aim is to live by compassion’s rules.” In fact Levi’s “If This Is a Man,” specifically asks not for compassion from readers, but rather for awareness and moral vigilance. Even if misattributed, Fine’s quote from Levi suggests her deep admiration for the Italian writer, and her lasting involvement with Jewish tradition. Had she not tragically died as a result of a car accident in Bennington, Fine surely would have created even more works along these lines.

Benjamin Ivry writes frequently about the arts for The Forward.