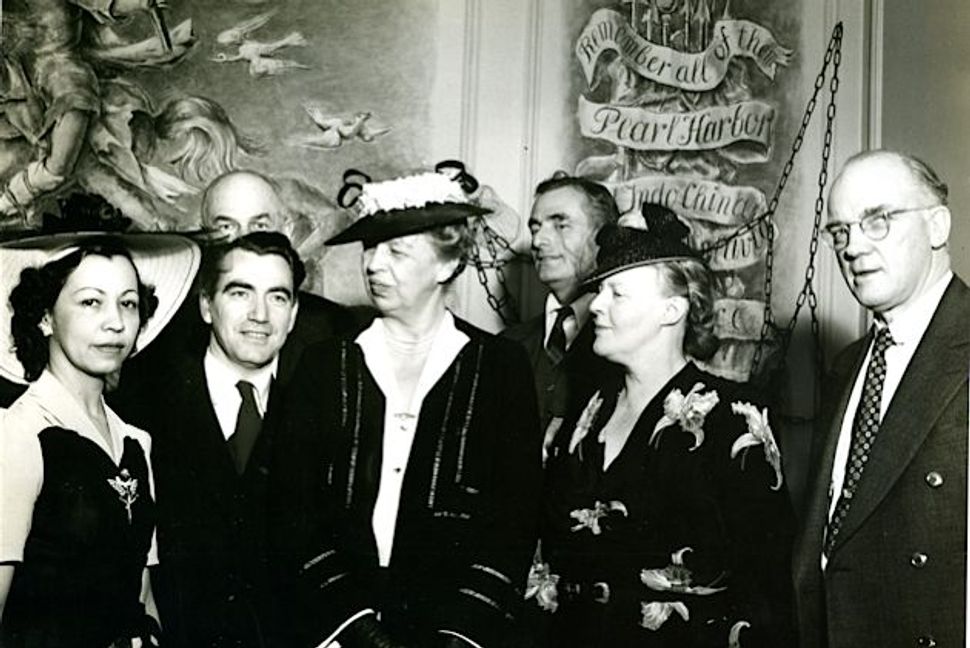 Let Freedom Ring: Eleanor Roosevelt (center) was one of the founders of Freedom House, an anti-Axis gathering place in New York City, which broadcast radio shows to peoples of occupied countries, a point of interest for Forverts readers. Here, she is pictured at Freedom House reception with journalists Herbert Agar (second from right) and Dorothy Thompson (right). Image by Forward Association

Murder in the Rosenthal Home

Morris and Bessie Rosenthal had a good business and a good life with their six small children. But he fell in love with another woman, and left his wife and kids to move to Chicago with his new love. Just before he left, he sold the business and left his wife and kids with nothing. But Bessie Rosenthal was a strong woman and managed to put all six kids through school. Eight years ago, Morris Rosenthal came back and told his wife and kids that he had gone bankrupt, had broken up with the other woman, and wanted to come home and make peace. His wife and kids kicked him out of the house, but he eventually showed up again and demanded that his wife take him back. “If you don’t take me back,” he said, “I’ll kill you.” “I’m not scared of you,” his wife said. With that, Morris Rosenthal pulled out a revolver and killed her and then himself.

The Arab Committee for the Defense of Palestine sent an ultimatum to Zionist leader Chaim Weizmann, causing somewhat of a sensation. Sent in the form of a telegram by Nabi el Azma, head of the committee, salient portions read as follows: “Your positions will bring forth the worst tragedies in history for you and the Jews of the Middle East. Even if all the Arabs will have to be removed, they will never permit you to become a majority in Arab Palestine. You and your people must save the Jews of Palestine and the other Middle Eastern countries. Do not bring your Western problems to the East, and be happy that you can save the Jews of Palestine. That should be enough for you.”

Israel claims that the Iraqis’ recent setup of military installations near the Syrian-Israeli border, the result of an agreement between Syria and Iraq to unite their armies under one rule, has upset the status quo in the region. Iraq never signed a cease-fire agreement with Israel, as the Syrians have, and there is concern that the border could again become hot. When Iraqi President Abdel Atif announced the military agreement between Syria and Iraq, he said that its main purpose was to defend the waters of the Jordan River from the State of Israel. Commenting on the agreement, the Egyptian press said it would not succeed. Observers say that the Syrian-Iraqi connection is an attempt to deny Egypt the control it seeks over the Arab world.