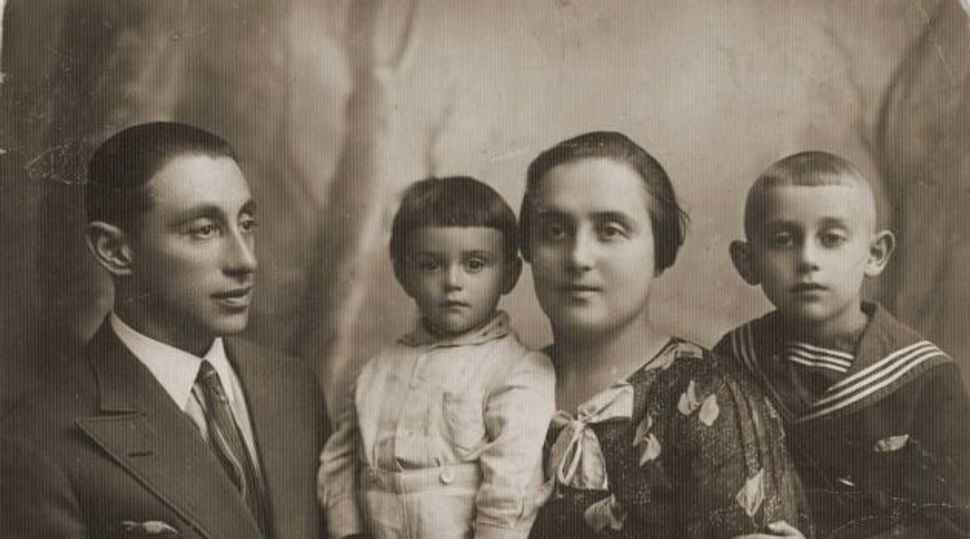 Preserving History: The world of Doba and her family comes vividly to life in David Laskin?s new book ?The Family.? Image by Courtesy of David Laskin

On my first trip to Israel, just hours after I landed in Tel Aviv, my Israeli cousin Benny told me that he had nearly 300 family letters dating back to the 1930s and ’40s. I had come to Israel to research a book about the family that Benny and I have in common, and this revelation felt like winning the lottery.

“Most of the letters were from my mother Sonia’s family in Poland,” Benny explained over mint tea in the backyard of his house in Moshav Avichail, north of Netanya. “Her parents and sisters wrote to Sonia after she made aliyah in 1932.”

There were also letters written by Benny’s grandfather, Shalom Tvi, who had left Poland just weeks before World War II began to visit family in New York — my immediate family. Shalom Tvi spent the next seven-and-a-half years trapped in the States, agonizing over the fate of his wife, daughters and grandchildren in Europe.

“The problem,” Benny said, “is that the letters are all in Yiddish and my parents never taught us Yiddish. At home they spoke only Hebrew.”

“This is a problem that can be solved,” I was thinking.

It took almost two years, but between us, Benny and I had all 281 letters translated into both Hebrew and English.

The first batch of English translations to arrive were of letters from the early 1930s. They were steeped in the Sturm und Drang of 22-year-old Sonia’s departure for Palestine, her struggle to find her feet in a strange land, the rapid progress of her relationship with Chaim (the first cousin who had come to Palestine eight years before her and whom she married in 1933). Once the war broke out in September 1939, the letters — especially those written from Vilna by Sonia’s eldest sister, Doba — became electrifying.

“Who could have imagined that so horrible a war had begun?” Doba wrote in January 1940 from Soviet-occupied Vilna. She described the Jewish refugees from German-occupied Warsaw streaming into Vilna — prominent, formerly well-to-do people now reduced to living on handouts from “the Joint” (the American Jewish Joint Distribution Committee). An acquaintance from Warsaw came to visit, Doba wrote, and “my heart ached. Yesterday he was a wealthy supporter of the congregation, and today he must ask for support for himself. There are thousands like him. The wealthiest men in Warsaw, important lawyers, all need alms.”

Doba, a tenderhearted wife and mother of two young sons, became frantic to get her family out — and furious that the American relatives were not doing more to help her. “We have a wealthy family [in New York], and they prefer to send money instead of inviting us [that is, sponsoring their immigration to the United States],” she wrote to Sonia. “I cannot understand why they have not sent all of us an invitation.”

“They will never invite us,” Doba wrote on February 19, 1940. “Too much of a burden for them. It is very cold, and the children spend the whole winter in bed. Thus we pass the days, while in America when it gets too cold they go to Florida.”

My face burned as I scanned these lines. The family in New York that Doba railed against was my family. My grandfather — Doba’s first cousin — ran a successful wholesale business with his brothers. My grandfather’s sister, Ida Rosenthal, was the founder and head of the Maidenform brassiere company, one of the largest family businesses in the world.

Why didn’t the American family do more to get Doba and her husband and young sons out of Vilna while there was still a chance? Seventy years later, I have no easy answer. They sent money; I know that one relative hired a lawyer to try to untangle the red tape. Could they have succeeded had they tried harder? There is a small shelf of books dealing with the “abandonment” of the European Jews during the war. Until I read Doba’s letters, I never suspected that my own family had a personal stake in this painful chapter.

Doba wrote Sonia on March 26, 1940: “Thousands are fleeing from here to America and Palestine — refugees and people from Vilna. They get their travel permits by cable — everything is settled very quickly. Naturally we ask why our family, who are people of means, cannot receive us? This question has cost me my health.”

But in fact, the situation was much more complicated. Once the war started, international travel became difficult to arrange. Even if Doba had somehow been able to book passage out, it would not have been easy to get in, because of the State Department’s increasingly stringent documentary requirements. The truth is that from September 1939 forward, Vilna’s Jewish residents and refugees had scant hope of securing sanctuary in the United States or anywhere else in the world. Residents had an even tougher time getting out than refugees had. The winter of 1939–1940 was bitter and terrifying. But by the spring of 1940, the letters took on a markedly different tone. After the initial hysteria, life

had returned to something approaching normal. Though the Soviets crushed the soul of Judaism, individual Jews could live well under the new regime as long as they toed the Stalinist line. Doba’s husband, Shabtai, fitfully employed during the 1930s, found steady work. In Rakov, the shtetl where the rest of the family lived, Doba’s brother-in-law Khost was appointed principal of the local school. He and his wife, Etl, Doba and Sonia’s sister, decided to have a second child.

From America, Shalom Tvi kept writing his daughters to ask if they were in need, but Doba and Etl always declined his offers. “What a wonderful country,” Shalom Tvi remarked sarcastically of Sovietized Poland. “They have nothing but they need nothing.”

Early in the war, Doba wrote her father that “we are sitting on the mouth of a volcano,” but to judge by the letters, she forgot about the volcano during the eerie lull of the so-called phony war. “Good news,” Doba wrote to Sonia on January 20, 1941: Their mother had come to Vilna from Rakov to attend the bar mitzvah of Doba’s first-born son, Shimon. “May there be peace,” Doba wrote Sonia in a postcard dated May 30, 1941.

Three weeks later, the volcano erupted. The Germans broke their pact with the Soviet Union on June 21, 1941, and Vilna fell to the Nazis on June 24. Doba and her family were now prisoners of the Third Reich. There were no more letters from Europe after that.

I have read a number of accounts in history books of Jewish life in the Soviet sector of Poland during the first years of the war. But somehow history feels different when it’s filtered through the experiences of your own flesh and blood. Painful as it was to read some of the letters, I feel blessed to have them.

The family Benny and I share had three branches in 1941; today only two remain. These letters are as close as I will ever get to knowing Doba and Etl and their husbands and children. Benny intends to deposit copies in the archives at Yad Vashem. My hope is that future historians will appreciate the rays of light — faint, golden, radiant with the particular — that these family letters shed on a dark time.

David Laskin is the author of “The Family: Three Journeys Into the Heart of the Twentieth Century,” recently published by Viking.