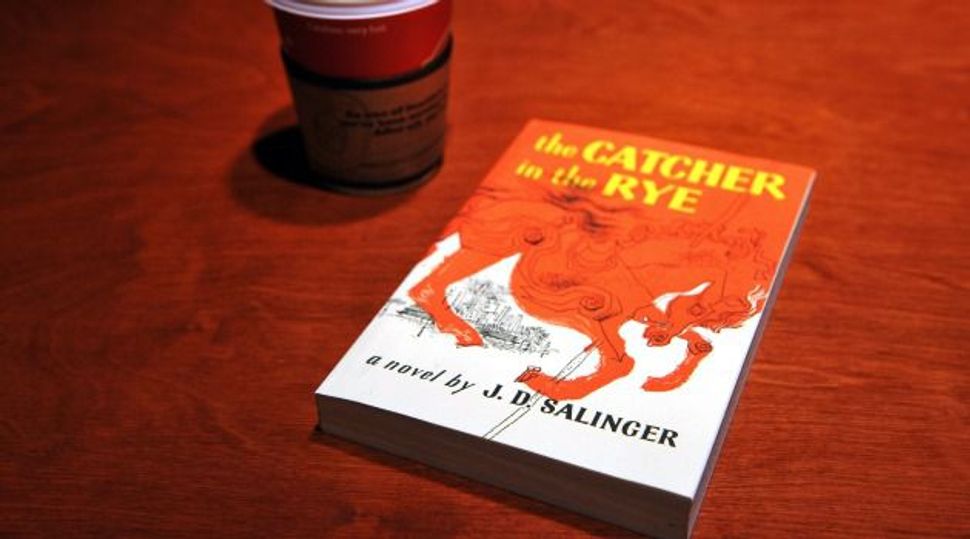 Catcher in the Wry: To be a Salinger man could mean aligning yourself with loners, moody outcasts, and devotees of Travis Bickle. Image by Getty Images

Back in high school, I was friends with the Salinger boys, but I wasn’t really one of them. As I recall it now, there were three: John, Thom and Barnaby (I’ve changed two of their names and I’ve left one the same, for reasons you’ll probably figure out later). You could recognize the Salinger boys by their battered maroon paperbacks (obviously not assigned for any class), their to-hell-with-the-system ’tudes and their liberal usage of crumby Holden Caulfield phrases. Now that I think about it, though, I actually don’t remember any of them using the word “phony.” Probably they would have found it phony to say the word “phony” too much; probably they would have found it phony to pattern themselves too closely after a fictional character. Still, they were hyper-literate lads, full of brash attitude, of prematurely sardonic humor, of pop culture references. And from them I acquired a fair number of my cultural tastes — the Elvis Costello tapes; the Bill Murray movies; the Kerouac books; the wise-ass, under-the-breath remarks about our sadistic, pre-Sandusky era gym teachers — but at J.D. Salinger, I drew the line.

You would have thought old Jerome’s works might have appealed to a kid like me, that I would have identified with his characters: those gifted, well-spoken children feebly clutching onto their ephemeral innocence; those blessed, shell-shocked souls too fragile for this world. I should have crushed on Holden just like the rest of those Salinger boys did. You would have thought that I — the wannabe writer son of a doc from Chicago’s West Rogers Park who trumpeted the accomplishments of anyone remotely Jewish — would have found inspiration in the tale of this kosher cheesemonger’s son who became the great American writer.

But I skipped out on the whole Salinger thing.

The problem was the people who liked him. And, as I saw it back then, they fell into two camps: those I aspired to be, and those I feared I might become. To be a real Salinger fan back in the early 1980s could mean aligning yourself with loners, moody outcasts, devotees of Travis Bickle, wearers of Holden “people shooting hats.”

At their most extreme, they were J.D. fans like John Hinckley, the would-be assassin of Ronald Reagan, and Mark David Chapman, who had a copy of “The Catcher in the Rye” in his pocket the night he murdered John Lennon. No, you’d never want to be mistaken for one of them, but could you ever fool someone into thinking you were one of the Salinger boys? Well, that would be tough.

For the Salinger boys — the ones I knew, were hardly outcasts— no more than Holden was. No, like Holden, John and Thom and Barnaby knew just how to play that outsider role. In fact, they were good looking, they were All-American, charismatic, well-to-do; they won key posts in school elections, were cast as leading men in musicals and plays. They had sex, lots of it. Or they didn’t have lots of sex, but you knew they could have. Or they had had a lot of sex in the past, but now, at age 17, they were jaded by it, man, thought there was something so shallow about seeking it out, man. Popular lads, they were troubled by their own popularity; beloved by girls, they were distrustful of that adoration; they were gifted at athletics but unwilling to associate too closely with those who shared their skills at tennis, soccer, bicycling and all those other upper-middle-class white-boy sports. Were they Jewish? As Jewish as Holden Caulfield. Was I their only Jewish friend? I don’t know; in one case, maybe I was.

As the Salinger boys grew older, they could make you believe that they had actually become grown-up Holden Caulfields, one of them even played roles just like that in movies like “High Fidelity” and “Say Anything.” (See, I told you that I changed two of the names but kept one of them the same, and that you’d find out why.) Did I find something WASPy about Salinger and my friends who dug him and something Jewish about Hinckley and Chapman? On a subconscious level, maybe I did. For, as the child of Depression-era parents, what did I know of Jewishness like Salinger’s? What did I know of prep schools and Manhattan and The New Yorker magazine?

And so what did you do at that tender, malleable age when you felt as though you were caught between those two worlds, between the Judeo and the Christian, the periphery and the mainstream, the Bickle and the Caulfield, the Chicago neighborhood where I grew up and the northern suburbs where I went to school? Well, in my case, it meant staying far away from J.D. Salinger as he moved away from the world; it meant finding other role models and inspirations whose messages weren’t so confusing or confused. I lost myself in Calvino, Woolf and Kerouac; in Borges, Conrad and the Bronte Sisters. Could you grow up happily without J.D. Salinger? Sure you could, easy as anything.

I was out of college for a year before I actually read “Catcher,” and by then the book had lost any power it might have had over me to alienate or enchant. I was teaching test prep classes on the north side of Chicago and needed to find something to read from the classroom shelf while my students filled in bubbles on their practice SATs. In that time, I read the whole thing, cover to cover. It made no great impression; I put it back on the shelf with little more than a shrug, while my students were still filling in their bubbles. And yet, for years the story haunted me. Not Holden Caulfield’s but that of Salinger himself — Salinger, the recluse; Salinger, the Buddhist; Salinger, who had become too cantankerous or fragile to face the world. Would I ever want to become like that? Not a chance.

About a month or two ago, I finally picked up “Catcher” again, and for the first time in my life, when I finished reading it, I felt I understood it; for the first time, Holden got to me, he really did. But I no longer wondered how it would feel to be Holden; I wondered what it would be like to be Holden’s dad, how to handle all that beautiful potential, all that crazy angst: As a father, how would you deal with all that?

These days, I no longer worry about whether or not I was a Salinger boy, no longer struggle with being caught between one thing and the other, feel content that I could be either and don’t really give a damn which one I might be. We all grow up, we all move on. At some point, even John stopped playing Holden Caulfield. The other night I saw him in a movie in which he played Richard Nixon. That kills me, I swear to God.

Adam Langer is the arts and culture editor of the Forward. He is the author of a memoir and five novels, including his latest, “The Salinger Contract.” Follow him on Twitter, @Adam_Langer