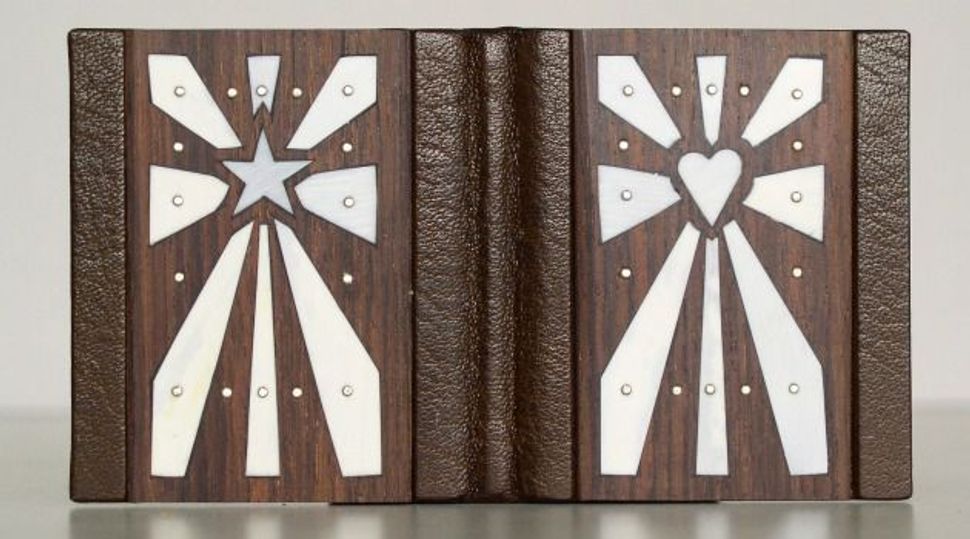 Those of you who have strayed through antiquarian bookshops will have, on occasion, chanced upon particularly unique-looking books. Perhaps a volume bound and covered in leather or vellum, as likely or not adorned with ornate designs or engravings. Maybe the cover has been embossed with an ancient typeface?

These books might have special features such as metal clasps or leather straps, for the purposes of sealing the books’ covers and preserving its contents. In rare cases, you might observe a veritable tomb of a book with a bejeweled cover.

Bookbinding is an age-old craft, its practitioners artisans in guilds who, by dint of their skill and workmanship, elicit admiration by diligently pursuing and often attaining the highest standards of their craft.

The advent of the Internet has not seen off the format of the book, nor is its demise coming anytime soon. Yehuda Miklaf, a Jerusalem-based bookbinder, has a backlog of orders, and his highly regarded editions are still in demand. Despite the specialized and somewhat exclusive nature of Miklaf’s work, his burgeoning trade testifies to the fact that books remain very much in the cultural domain and will for some time to come.

Born Seamus McClafferty (he converted to Judaism in 1986 and moved to Jerusalem with his wife), Miklaf hails from Nova Scotia. In 1968 he moved to Toronto and began learning his trade while working at the city’s university library. He attended classes with master bookbinders, gradually building up skills and experience. Considering his newfound passion a hobby, Miklaf applied himself to it enthusiastically: He set up a small bindery in his apartment, purchased equipment and worked at honing his technique in his spare time.

His teachers were more than happy to reciprocate in kind. “These guys were so happy somebody was interested in learning, they gave me carte blanche,” Miklaf recalled. “I could visit them anytime, watch them work and ask questions. Five years later you couldn’t get anywhere near them. By that time, many people wanted to learn, and they were held up as gurus.” 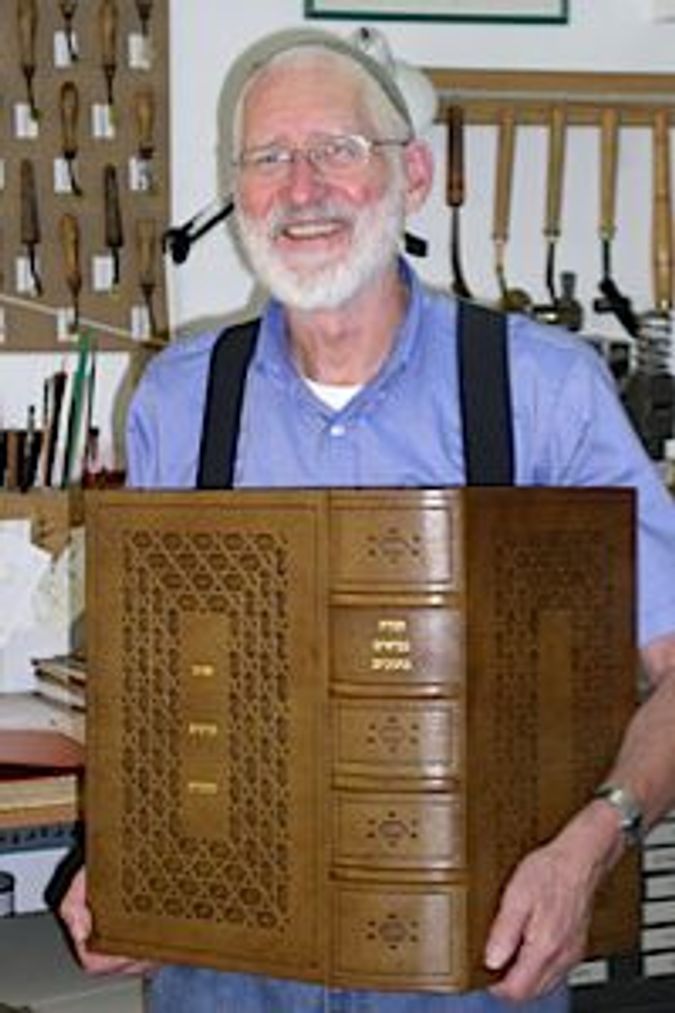 Book Art: Yehuda Miklaf with one of his treasured hand-crafted books. Image by Graham Lawson

Fine-art bookbinding requires many years of learning to master the necessary skills. Over time, a binder learns to exercise his judgment with regard to the stitching of pages, the tooling of leather and the cutting of the text block, to name only a few techniques. Each book passes through various stages in the binding or restoration process; whether it be a “period” or “design binding” or an act of restoration, the general time allotted for completion is three months.

After an extended apprenticeship of sorts, Miklaf’s commitment and dedication had paid off. In 1977 he left his job at the library and became a full-time bookbinder. The close association with his mentors, now his friends and contemporaries, are relationships he has maintained to this day, and soon they led to him being entrusted and recommended for bookbinding commissions.

That same year, he received his first important commission from the Ontario government — a presentation binding for Queen Elizabeth on the occasion of her visit to the province, celebrating her silver jubilee. A few years later he bound the original manuscript of Mark Twain’s “The Adventures of Huckleberry Finn.”

Now 70, Miklaf, an erstwhile 1960s beatnik, seems lively in both mind and body. Bookbinding is a demanding profession. The rigor and discipline Miklaf has applied to his craft, in what could be perceived as a philosophy of life, would seem to have served him well.

Since moving to Israel and setting up his trade in Jerusalem, Miklaf has been the country’s premier bookbinder, designing bindings for President George W. Bush and Pope Benedict XVI. In the 1990s, the Italian scholar and writer Arturo Schwarz came to Israel to donate his collection of Dada and Surrealist art to The Israel Museum. The museum commissioned Miklaf to design three boxes for Schwarz. He and Schwarz hit it off, possibly because they discovered that each spoke Esperanto. The meeting resulted in the two collaborating on an edition of Schwarz’s poems — one of seven published books by Miklaf’s own private printing press, Shalom Yehuda Press.

The activities of the press are a part time operation for Miklaf, complementing his practice in the book arts. With the help of the Jerusalem Print Workshop, he located a small printing press, and now he continues to amass equipment and various typefaces for printing. The creation of the press has also allowed him to work on special interest projects.

One such project developed out of a fascination that Miklaf had for a piece of music by John Cage titled “Indeterminacy,” a recording he says he has listened to probably hundreds of times over the years. A miniature book titled “Am I Now?” and a book titled “That’s Not the Way,” both published by the press, use texts written by Cage and involve the use of Cage’s improvisational technique, based on the role of chance.

“I became a bookbinder so I could work alone, but I wanted another influence in there. So I decided to use ‘chance operations’ to make decisions for me,” he said. “For example, I’ve done bindings where I’ve generated random numbers, looked up the numbers on a Munsell color chart and reproduced the colors on a binding. A lot of my work uses ‘chance operations’; it’s not always making the major decisions, but it’s part of how I work.”

These days, Miklaf says he remains as busy as ever fulfilling private commissions, writing for international journals about his craft and planning future projects.

“There’s a story with every book,” he said. “Each one is unique.”