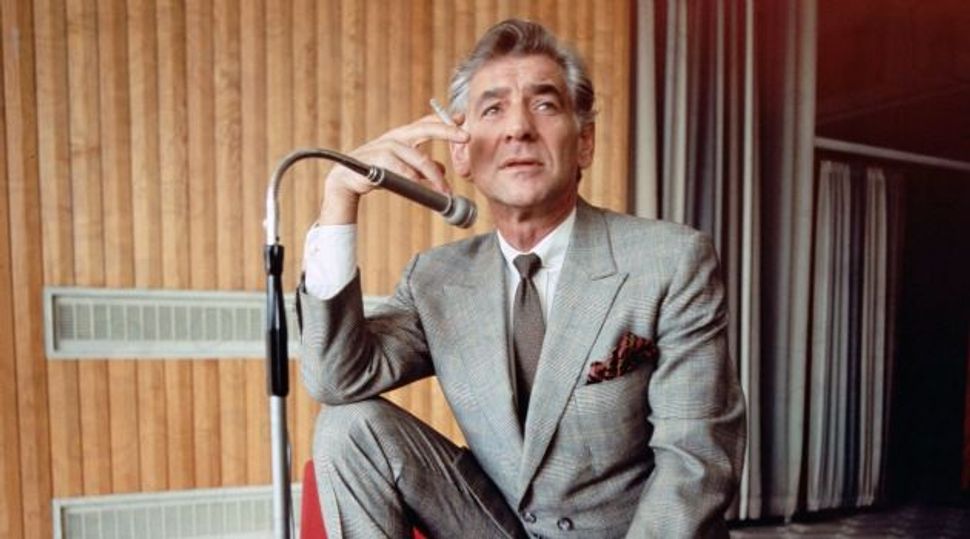 Smoke Gets in Your Eyes: Leonard Bernstein (seen here in 1970), suffered from chronic emphysema. He passed away in 1990 at the age of 72. Image by Getty Images

No one ever questioned Leonard Bernstein’s gifts. His innate musicality was apparent prodigiously early, as were his verbal intelligence, his energy, and his limitless self-confidence. Almost everyone who knew the young Bernstein assumed he would achieve great things. Whether his later career lived up to that early promise remains a matter of controversy, but with his messianic zeal for music and his voracious appetite for the limelight, there can be no doubt that over several decades he made himself the iconic face of American music.

This generous collection of correspondence, much of it culled from The Bernstein Collection at the Library of Congress, includes letters both to and from Bernstein. Most of the exchanges are with friends and colleagues, although there are a few odd exceptions, like a charming note from the 10-year-old Yo-Yo Ma offering to let Bernstein hear him play, and a sharp although not especially cutting response from Bernstein to the college-age John Adams, who had apparently written a snarky letter full of post-adolescent superciliousness criticizing Bernstein’s musical conservatism.

However, it isn’t clear to me for whom this collection is intended — other than die-hard Leonard Bernstein fanatics — or what its primary interest is assumed to be. Music professionals are likely to be frustrated by the absence of much in the way of musical substance; assorted composers, pieces and programs are mentioned frequently enough, but rarely discussed in any depth. Lovers of musical theater may enjoy the exchanges about the creation of “On the Town,” “West Side Story,” “Candide,” and the disastrous “1600 Pennsylvania Avenue,” but they occupy, even in aggregate, a rather small amount of space. Unvarnished assessments of contemporaries are few and far between (although a tiny handful are harsh enough to be noteworthy amidst the prevailing bland positivity).

Bernstein was a lively, garrulous and frequently funny correspondent, and on the evidence contained here, a devoted and conscientious friend, a loving brother, and a dutiful son (if one discounts the treatment of the character accorded his father’s name in the operetta “Trouble in Tahiti”). But, with a few very significant exceptions, a certain impersonality or distance adheres to these pages; the letters are newsy and chatty, but the interior life of the writer remains largely hidden.

The exceptions involve a tiny handful of Bernstein’s more intense personal relationships, and here we find… not revelations, exactly, but provocative, illuminating tone and detail. The relationships themselves are certainly well-known to students of Bernstein’s life, but our understanding of them is expanded and clarified by these private communications. It must be said, however, letters to and from Tom Cothran, one of the most important people in Bernstein’s later years, are, for whatever reason, entirely lacking.

Notes to Serge Koussevitsy, for example, betray an obsequious tone otherwise absent in the correspondence, suggestive of the unique dynamic between them. It isn’t really surprising; the conductor of the Boston Symphony Orchestra played a crucial mentoring role in Bernstein’s early career. And regardless of any practical calculation that may have informed his letters to Koussevitsky, Bernstein genuinely admired the older man’s artistry and spirit. Nevertheless, in an astonishing exchange of letters from December 1946, Koussevitsky ruthlessly assails both Bernstein’s behavior and one of his compositions. Bernstein’s answering defense is meek and placating. This is an extreme example, certainly, and the mode in which Bernstein engages Koussevitsky isn’t found in his correspondence with anyone else. We can only guess what psychic cost the act of writing it must have exacted.

Although nowhere near as submissive, his exchanges with the notoriously tetchy Jerome Robbins are consistently (and uncharacteristically) deferential, with offers to alter his music to accommodate the choreographer’s requirements, or even his mere preferences. When Bernstein expresses disagreement with Robbins, even with regard to music, he does so tentatively, and with offers to accede to the other’s wishes.

But most revelatory, at least to this reviewer, were the exchanges with Aaron Copland and with Bernstein’s wife, Felicia Montealegre.

The longstanding friendship between Bernstein and Copland is very well established, not least because the former was so publicly proud of it. But Copland often seemed somewhat reserved about this relationship, displaying a slightly ironic attitude toward his younger colleague’s flamboyant manner. (“I’m not a shouter,” he once said to Bernstein with dry, amused distaste during a rehearsal of his “Lincoln Portrait,” in which he was the narrator and Bernstein, conducting, instructed him to raise his voice.) But as their letters dramatically attest, the affection was in fact reciprocal, and went very deep. Whether it was ever a physically consummated love affair remains unclear — the letters, at least those anthologized in this volume, do not resolve that ambiguity — but the two men certainly addressed one another in a vocabulary of romantic sentiment. They also seem to have shared lovers; there is, for example, a strange, funny letter in this collection in which Bernstein consigns a young blond Swedish boy to Copland’s ministrations. They not infrequently share accounts of their amorous adventures too, although never in especially explicit terms.

Copland admired Bernstein’s conducting — and even accepted advice from him when he began conducting his own works in earnest — but was not a huge fan of Bernstein the composer. Evidence for this in the current book is indirect, largely located in Bernstein’s surprising equanimity in the face of what had clearly been criticism. Bernstein, on the other hand, appears to have admired Copland’s music wholeheartedly; this was sincere devotion, not a pose, not a strategy. The hint of self-regard or self-consciousness detectable in many of Bernstein’s other letters is nowhere in evidence here. Theirs was a fascinating and probably unique sort of dynamic whose nature, while still mysterious, is rendered more comprehensible by their correspondence.

With regard to Bernstein’s marriage, two myths are summarily dispelled by this collection. It is not true, as some apparently believe, that Bernstein’s wife was deceived about his sexual orientation until presented with a nasty series of shocks in the ’70s. On the contrary, in a letter written early in their marriage, she essentially gives him permission — more than permission, she virtually instructs him — to indulge that side of his nature. (“[Y]ou are homosexual and may never change,” she writes him, and adds, “if your peace of mind, your health, your whole nervous system depend on a certain sexual pattern what can you do?”) The implicit proviso is that he be discreet, that he neither confront her with his amours nor humiliate her publicly. And the marriage, until its painful breakup, was not simply a convenience for Bernstein, a hedge to protect his public reputation; The letters demonstrate beyond a doubt that this was an intimate and loving relationship, not an arrangement.

As to the editing of this volume, it isn’t 100 % satisfactory. Some of the footnoting demonstrates a fastidiousness toward identifying people and situations that is exemplary. But there are many obscure references that lack remark or explication. The way the letters have been culled, often including a response to a letter we haven’t been shown, or a letter begging a response that isn’t supplied, can be frustrating. And there is one very long footnote, covering several pages, about the House Un-American Activities Committee and the movie “On the Waterfront,” that gets one aspect of the subject so completely wrong the reader can only scratch his head in disbelief. Far from being an attack on McCarthyism, as Mr. Simeone suggests, the film was written and directed by men who had named names and were now trying to justify their behavior.

Still, flawed though it may be, for anyone interested in Leonard Bernstein, or in American musical life in the second half of the 20th century, this volume merits a place on the bookshelf.

Erik Tarloff is a novelist, screenwriter, and essayist who often writes about musical subjects. His next novel “All Our Yesterdays” will be published in January.