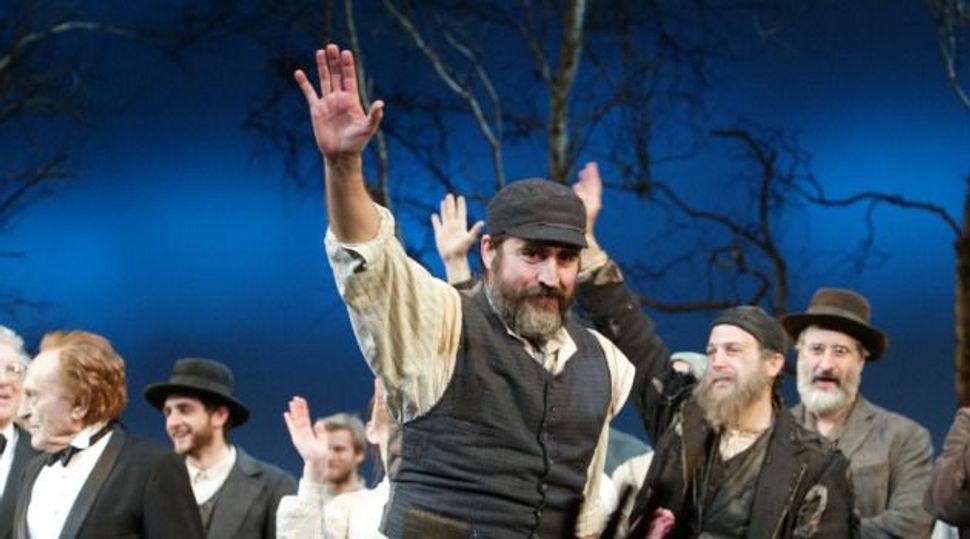 Fiddling About: Alfred Molina starred as Tevye in a 2004 revival of ?Fiddler on the Roof.? Image by Getty Images

Those searching for razzle-dazzle bar mitzvah entertainment need look no further than the Amazing Bottle Dancers, a group of athletic young men who’ll burst into your special event, hoist the guest of honor up onto a chair, perform the suspenseful “bottle dance” from the wedding scene in “Fiddler on the Roof,” and then, for a grand finale, lead the whole crowd in a rollicking 45-minute hora.

These enterprising dancers, with their pasted-on peyes and beards, are easy targets for “Fiddler” detractors of all types — from those who lament that whole generations seem to have gleaned everything they know about Jewish religious practice from show tunes like “Sabbath Prayer” and “Tradition,” to Yiddishists who view the musical’s plot as a bastardization of Sholem Aleichem’s Tevye stories.

Theater critic Alisa Solomon can’t resist her own subtle dig at the entertainers she describes as “fake Hasidim for hire” in “Wonder of Wonders,” her exhaustive new cultural history of the show.

But lambasting “Fiddler”-themed kitsch is otherwise of little interest to Solomon, who wisely avoids assigning credit or blame for the musical’s cultural spin-offs to its creators, who no more could have anticipated ceramic Tevye music boxes and Anatevka-shaped mezuza covers than they could have predicted that figures as diverse as Glenn Beck and Occupy Wall Street protestors would one day borrow from the show to advance their agendas.

“Wonder of Wonders” offers a particularly thoughtful analysis of how “Fiddler” — a midcentury showbiz creation — has achieved something like folklore status in the American imagination, and grapples, as any history of this musical must, with fundamental questions about Jewish identity.

Yet Solomon is right to describe her account as first and foremost a “story about theater, the making of it and the meanings that come from the messy and marvelous collaborations that are its essence.” If the Amazing Bottle Dancers’ routine gets under her skin, it’s because she views it as a betrayal not of Sholem Aleichem but of Jerome Robbins, the director and choreographer who sweated and fretted over the original “bottle dance” — and who emerges as the hero of her tale.

The seeds for “Fiddler” were planted years before Robbins was born in 1918. Solomon dutifully devotes the first chapters of “Wonder of Wonders” to a lively and thorough enumeration of early attempts to adapt Sholem Aleichem’s works for the American stage, beginning with the moment in 1906 when the author himself arrived in New York with the dream of striking gold in the thriving Yiddish theaters of the Lower East Side.

But Sholem Aleichem would die before finding any real theatrical success, and as late as 1953, when an English-language adaptation of Sholem Aleichem’s stories opened off Broadway (featuring, at the height of the Red Scare, a cast made up entirely of blacklisted actors), Eleanor Roosevelt would still find it necessary to exhort readers of her newspaper column, “Don’t think because it’s about Jews you won’t like it.”

If you open the book (as I did) already humming the sentimental strains of “Sunrise, Sunset,” you might find yourself longing to skip past the intricate backstory to the part where Solomon starts talking about the more immediate origins of the musical.

Enter, then, librettist Joseph Stein, composer Jerry Bock, and lyricist Sheldon Harnick, a trio of Broadway veterans who by 1960 were looking for a follow-up to “Fiorello!,” their Tony Award- and Pulitzer Prize-winning 1959 hit. Armed with a single copy of an out of print English translation of Sholem Aleichem’s Tevye stories, they began to sketch out a musical about characters that, as Stein put it, “just happened to be Jewish.”

This is essentially how the three men (and just about everyone else writing for Broadway at the time) viewed themselves; having largely left religious observance and Yiddish behind, they “responded to the identity with the quintessential Jewish gesture: a shrug,” Solomon writes. And yet that distance didn’t stop them from engaging deeply with the stories’ themes and historical implications. One of their proposed names for the work was “Where Poppa Came From.”

Once they had a script, they needed a producer (or two). Hal Prince said he’d consider backing the show only if Jerome Robbins, who’d changed the American musical forever with the vernacular movement and operatic tragedy of 1957’s “West Side Story,” would direct. That might have seemed like a long shot since Robbins repeatedly stated that he “didn’t want to be a Jew,” and at one point wrote that he learned ballet to escape the “wondrous and monstrous” dance steps he feared he’d find by “dig[ging] down to [his] Jew self.”

In 1959, however, Robbins took a trip in search of Rozhanka, the tiny Polish town where his father was born, and where Robbins recalled having spent a single carefree summer on his grandfather’s knee, unashamed, for once, of his Jewishness. By the time he thought to find it again, Jewish Rozhanka had long since been destroyed, and Solomon argues that wandering in search of that vanished shtetl is what primed Robbins to lavish such tenderness upon the fictional Anatevka.

Robbins threw himself into the project with his characteristic mania. He scoured shtetl histories and invited the show’s costume and set designers to his home for screenings of films like “Laughter through Tears,” hoping they’d absorb the sights and sounds of life in the Pale in 1905.

He interviewed his own father about his escape from Rozhanka, and warmed to the memory of his Yiddish-speaking maternal grandmother, whose “Jewish backward ways” he’d previously despised.

For local inspiration, Robbins crashed weddings in Brooklyn’s Borough Park, sometimes dragging along cast members disguised in Hasidic dress, to observe celebratory schnapps-fuelled dancing that enthralled him with what he termed its “virile ferocity.”

A closeted gay man who’d always felt ashamed of what he perceived as the weakness of Jewish masculinity, Robbins marveled as each “explosive foot thrust to the floor” seemed to him to assert a “strength [he] never knew.” In one attempt to bring Orthodox social mores back to the rehearsal hall, Robbins tried enforcing gender segregation during breaks — a policy he managed to enforce only for a few hours before the actors rebelled.

Some of the director’s more memorable clashes were with Zero Mostel, the loudmouthed and handsomely compensated star Robbins had come to view as indispensable, but whom he’d warily described in his journal as “crude, vulgar, but healthy and satisfied.”

Mostel, in Solomon’s analysis, “represented all that Robbins had repressed,” and Mostel seemed to know it, lording over Robbins his superior knowledge of Yiddish literature and Jewish customs. It was Mostel who insisted that Tevye would never neglect to kiss the mezuza when passing through the doorway of his home, and Mostel who persuaded Harnick not to cut the verse in which Tevye dreams of a synagogue seat by the Eastern Wall from “If I Were a Rich Man.”

Throughout the creative process, the team continued to make important changes to the script well into the show’s out of town previews in Detroit. Harnick wrote “Wonder of Wonders” in his hotel room, mining the Gideon Bible in his nightstand for mentions of miracles.

Robbins was still tinkering with it as late as two weeks before “Fiddler” opened on Broadway on Sept. 22, 1964. At last, obsessed by something he’d seen done by a Brooklyn Hasid he’d nicknamed “Mr. Redbeard,” he called a dozen male dancers into the studio to learn to bounce, twist and sway in ever more difficult “whips and hooks” — all with bottles balanced atop their heads.

Robbins didn’t allow stage illusions, so each night’s performance of the flashen-tantz was to carry a real risk of injury from shattered glass. (Today’s Amazing Bottle Dancers, to put it delicately, leave a good bit less to chance.) By injecting an element of danger into the dance, Solomon writes, Robbins both countered the chilling post-Holocaust stereotype of “weak, effeminate male Jews” and converted Tzeitel and Motel’s wedding into a genuine showstopper.

On opening night, the show’s creators exchanged gifts: Stein bought Harnick a mezuza, and Robbins received a shofar and a white silk yarmulke. Clearly, working on “Fiddler” had changed the four men, deepening their Jewish identification, and it had affected Robbins the most. “Making ‘Fiddler,’” Solomon writes, “Robbins reclaimed that discarded part of himself and, in so doing, returned it, in a glittering package, to those audience members who also had left it behind.”

The gesture was received with breathless enthusiasm by many Jewish spectators of the initial Broadway run, some of whom even wrote in to describe how much Anatevka reminded them of other little Polish and Russian towns they’d known, or else to offer gentle historical “corrections” to details that didn’t quite match up to their memories.

In light of these early fan responses, it’s ironic that critics of “Fiddler” became similarly obsessed with historical accuracy, panning the show’s depiction of “the cutest shtetl we never had,” as Irving Howe famously put it. Solomon responds with an argument that’s as obvious as it is elegant. “No one looks for documentary realism in the New York City of ‘Guys and Dolls’ or ‘West Side Story,’” she writes.

In fact, the fictional shtetl’s resemblance to real places began to seem irrelevant as it traveled the world, in international productions and onscreen in Norman Jewison’s 1971 film adaptation. Clearly, it wasn’t just Jews who longed for Anatevka: When “Fiddler” arrived in Tokyo, Solomon writes, the producer wondered how Americans could make sense of a story that was “so Japanese.”

And one of Solomon’s most moving chapters concerns a junior high production of ”Fiddler” in Brownsville, Brooklyn, during a teachers’ union strike over integration and community control of public schools. This “Fiddler” featured black and Latino preteens in the lead roles at a time when black-Jewish tensions in the neighborhood had reached an all-time high. And yet its cast members echoed one original Broadway chorister’s ardent declaration that, while working on the show, they came “to love our village.”

“It helped me to embrace all these different people,” one Brownsville actor recalled. “Including myself.”

One of the first audience members to make it backstage after the first night of “Fiddler” on Broadway in 1964 was Robbins’ father, who threw his arms around his son and and wept, asking, “How did you know all that?” Solomon’s book is a chronicle of the many ways in which so many of us have asked — and attempted to answer — that same question ever since.

Eileen Reynolds writes frequently about the arts for the Forward.