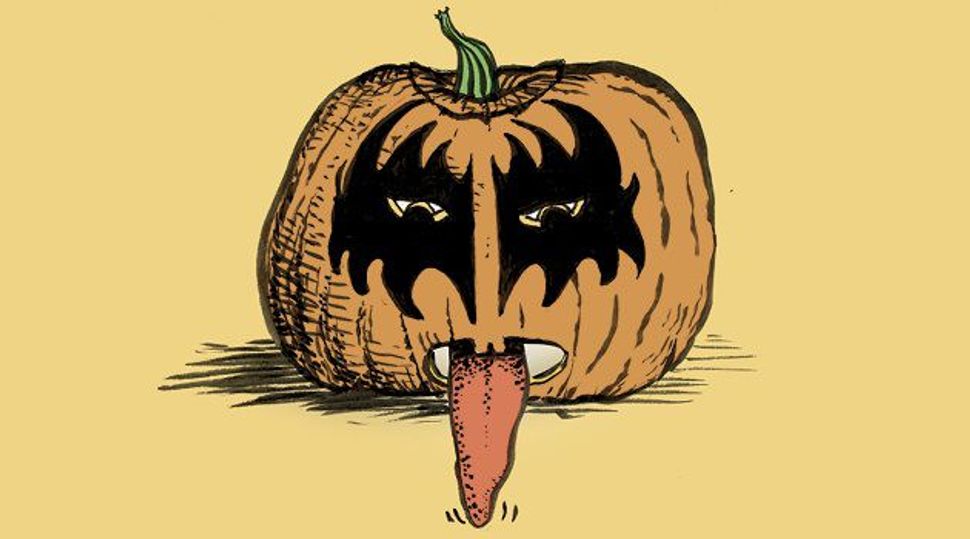 A Very Boo-ish Holiday: Artists from David Lee Roth to Lou Reed have had a hand in creating some of the spookiest songs for Halloween. Image by Kurt Hoffman

Witches and Halloween go together like chicken soup and matzo balls, and there aren’t many rock songs about wicked enchantresses that are more iconic than this one. Written and sung by original Fleetwood Mac leader Peter Green (née Greenbaum) in 1968, “Black Magic Woman” cast an even more powerful spell on the American populace via Santana’s 1970 rendition.

KISS — “Creatures of the Night”

Born Stanley Eisen and Chaim Witz, KISS co-founders Paul Stanley and Gene Simmons inspired countless Halloween costumes with their band’s grease-painted visages and outrageous stage outfits. On their hard-charging 1982 single “Creatures of the Night,” KISS echoes the words of another all-time Halloween costume favorite — Count Dracula — whose rapturous declaration “children of the night, what music they make” marked him as a rock ’n’ roll fan many decades before the real thing came along.

Van Halen — “Runnin’ With The Devil”

The opening track from Van Halen’s groundbreaking 1978 debut tells the cautionary tale of what happens when a nice Jewish boy like David Lee Roth pledges his allegiance to the Prince of Darkness. (Didn’t know DLR was Jewish? Ditch the “Lee” and say his name out loud.) “Ain’t got nobody waiting at home,” he laments, upon realizing that busloads of willing groupies and a closetful of tush-baring chaps are no substitute for his mom’s stuffed cabbage.

Eric Bloom, the only Jew in BOC, didn’t take his usual place at the microphone for the Long Island band’s platinum breakthrough hit; that honor went instead to lead guitarist Buck Dharma, who wrote and sang this 1976 hard rock classic — though it was co-produced by tribe members David Lucas, Murray Krugman and Sandy Pearlman. Regardless, there’s no denying the haunting appeal of the song’s chiming guitar lines, its lyrics about the acceptance of death, and of course the sepulchral clang of that insistent cowbell.

Ramones — “I Don’t Wanna Go Down To The Basement”

Ramones front man Joey Ramone (aka Jeffrey Hyman) was a huge horror movie fan, as evidenced by his lyrics to two different songs on the pioneering NYC punk band’s self-titled 1976 debut: “Chainsaw,” a tribute to “The Texas Chainsaw Massacre,” and this song, which — possibly inspired by the 1973 drive-in gore fest “Don’t Look in the Basement” — effectively articulates the intrinsic menace of a darkened basement with just a few words. “There’s somethin’ down there,” Joey insists. You betcha, boychik!

The Dictators — “Science Gone Too Far”

Born Mark Feld, the late T.Rex mainman Marc Bolan clearly spent more time in his formative years reading J.R.R. Tolkien and Edmund Spenser than the Torah. “Ride a White Swan,” T.Rex’s British breakthrough hit from 1970, brims with references to wizards and druids, and includes the suggestion that placing a black cat on your shoulder will allow you to obtain all sorts of arcane knowledge.

One of Dylan’s most enduring masterpieces, “Visions of Johanna” invites a myriad of interpretations, but the song’s nocturnal imagery — the creeped-out night watchman, the flickering loft lights, the museum filled with disembodied whispers, and of course the spectral presence of the titular heroine — does seem to paint Manhattan circa 1966 as one big haunted house.

Speaking of haunted houses (and mid-1960s Manhattan), this viola-scraping cut from the Velvet Underground’s first LP is dissonant enough to scare the ghosts out of any domicile, while the late Lou Reed’s cryptic lyrics add a few new ones in their place.

And finally, what Halloween playlist would be complete without Warren Zevon’s lycanthropic hit from 1978? Though his piña colada-swilling creation tended to overshadow the rest of his brilliant song catalog, Zevon was no stranger to Halloween-worthy lyrical excursions — as anyone who bought the original “Werewolves” single and flipped it over to find “Roland The Headless Thompson Gunner” waiting for them can attest.

Dan Epstein is the author of “Big Hair & Plastic Grass: A Funky Ride Through Baseball and America in the Swinging 70s.”