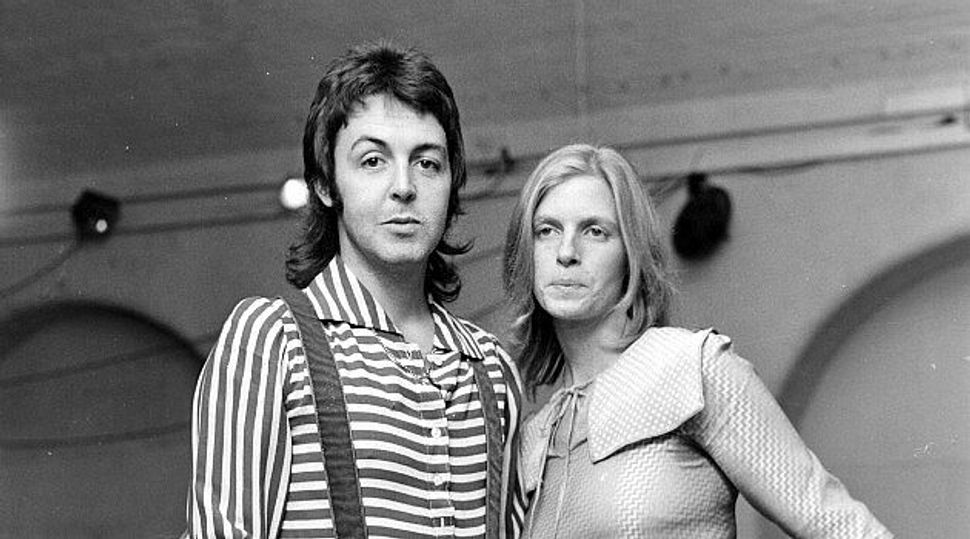 Sir Paul McCartney recently released “New,” his first album of original rock songs since 2007’s “Memory Almost Full.” Given the 71-year-old McCartney’s love affair with all things Jewish for the past half-century — including collaborators, business associates, girlfriends and wives — the title could well be meant as a transliteration of the all-purpose Jewish word nu.

The nu — I mean, new — album, full of Beatlesque confections in a panoply of styles — is co-produced by Mark Ronson, one of the hottest producers in popular music for the last decade or so, and the scion of a prominent English-Jewish family (the name was originally Aaronson). Ronson got the McCartney gig after DJing his 2011 wedding to Nancy Shevell, which took place on the day after Yom Kippur.

Over the holiday, the bride and groom attended services at the Liberal Jewish Synagogue in St. John’s Wood, near McCartney’s home and close to Abbey Road Studios, where the Beatles recorded most of their songs. Reports from the time of the wedding suggested that McCartney was considering a Jewish conversion in deference to his newlywed, but that apparently hasn’t happened — yet.

But Shevell is not the first Jewish Lady McCartney; that honor belonged to McCartney’s first wife, Linda Eastman. Born in New York City and raised in Scarsdale, N.Y., Linda Eastman was the daughter of Lee Eastman — the son of Russian-Jewish immigrants, born Leopold Vail Epstein — and Louise Sara Lindner.

Linda Eastman wasn’t the first Jewish woman who McCartney had dated That distinction goes to Francie Schwartz, who, as a 23-year-old screenwriter, flew to London from her native New York City on a whim in 1968 to see if she could interest McCartney — who at the time was engaged to be married to Jane Asher — in one of her scripts. The two wound up having an affair during the making of “The White Album,” and were allegedly discovered in bed together at McCartney’s place by Asher upon her surprise return home from a stay in India. Asher subsequently broke off the engagement; McCartney and Schwartz soon split, and McCartney took up with Linda Eastman.