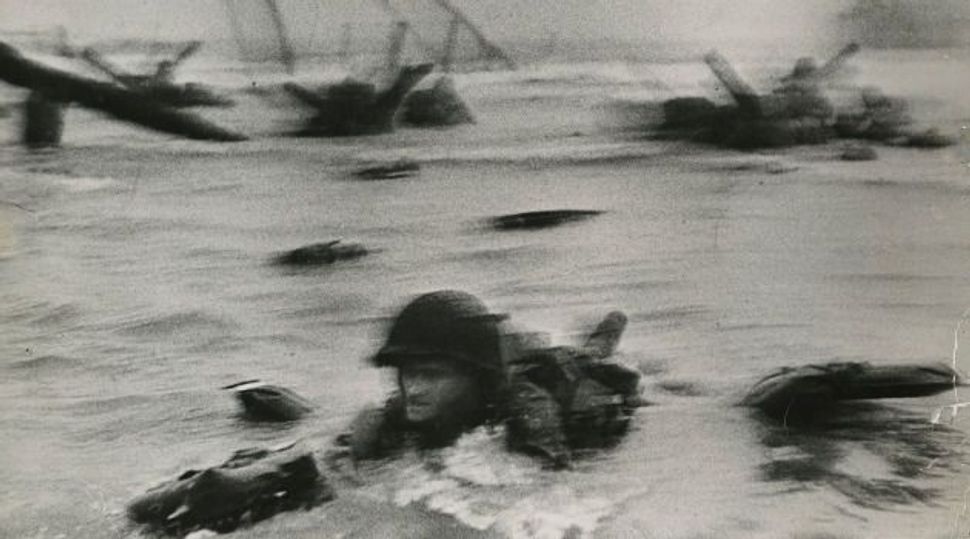 On The Beach: The Normandy Landing on D-Day was captured by Magnum co-founder Robert Capa. Image by Robert Capa © International Center of Photography/Magnum Photos

Most photographs of the entrance to Auschwitz-Birkenau are configured in landscape views. But when Elliott Erwitt photographed the tracks leading through the building at the camp’s entrance in 1964, he created a vertically-oriented image, devoting nearly two-thirds of the photograph to the train tracks. Had Erwitt turned his camera 90 degrees to capture the entire width of the building, the landscape would have been easier to decipher; the composition he chose is far more ominous.

The photo is one of more than 300 that appear in “Radical Transformation: Magnum Photos into the Digital Age,” on view at the University of Texas at Austin’s Harry Ransom Center until Jan. 5, 2014. The enormous exhibit also includes nearly 80 books, plus magazines, tear sheets, documents, correspondence, business papers, contact sheets, digitized films, and videos.

Several of the photographs in the exhibit also attest to the prominent role that many Jewish photographers, including Capa and Chim, played in the founding and development of Magnum. Chim’s photographs taken in Poland of a child in a residence for disturbed children. and of children on a jungle gym amid postwar ruins in Warsaw — both from his 1948 series “The Children of Europe” — appear in the show, as do three photos from Elliott Erwitt’s 1964 series “Auschwitz.”

The exhibit also features a 1962 photo of George Lincoln Rockwell, flanked by members of the American Nazi Party, listening to Malcolm X’s speech at Black Muslims meeting held at the International Amphitheater” by Eve Arnold (née Cohen), from her 1962 series “Black Muslims.” It also includes three images from Micha Bar-Am’s 1973 series “Yom Kippur War” of Israeli soldiers marching along the Bar Lev Line, of an Israeli tank in Egyptian territory, and of Generals Moshe Dayan and Ariel Sharon. (Bar-Am’s series on the Yom Kippur War is the subject of a current exhibit at the Tel Aviv Museum of Art.

Reached by phone in New York, Bar-Am — who was born in Berlin in 1930 and lives in Israel — said, “There were a number of Jewish photographers that were part of the founding members of Magnum, but I think it was on the basis of their photography, and not necessarily anything to do with their Jewishness.”

Bar-Am, who was invited in 1966 to join Magnum by Capa’s younger brother, Cornell Capa (with whom he covered the Six Day War), allowed that the “basic values of humanism” may have been part of the “spirit of the founding members,” but said that it doesn’t mean that faith bound the Magnum collective together.

“Feelings or sentiments come and go, and the feeling toward Israel at this very moment is probably not very favorable,” he said. “I’m an Israeli, Jewish photographer, and I belong to an international collective of wonderful photographers.”

But Chim’s nephew — Ben Shneiderman, a professor of computer science at the University of Maryland, College Park — was more comfortable discussing Magnum in Jewish terms. “Magnum was strongly influenced by its many Jewish members,” he said, noting that they were “very much devoted to tikkun olam.”

“They believed a photo could change the world, and sometimes they succeeded,” he said. “In the days when Life magazine was the Instagram-Flickr-YouTube of that era, their work often went viral and had impact.”

“Chim grew up in a home immersed in Jewish culture and literature,” said Helen Sarid Shneiderman’s sister (Chim’s niece), a retired professor at Tel Aviv University. “That certainly made him who he was.”

Although it would be difficult to track whether Magnum has covered more Jewish topics than other agencies, Shneiderman said he believes that “Jewish social consciousness” was an important influence. “Early on, there was great sympathy for the emergence of Israel,” he said, “but that is probably mostly gone by now, with as much sympathy for Palestinian causes.”

Menachem Wecker is a Chicago-based writer on art and religion. Find out more about him at http://menachemwecker.com or on Twitter @mwecker