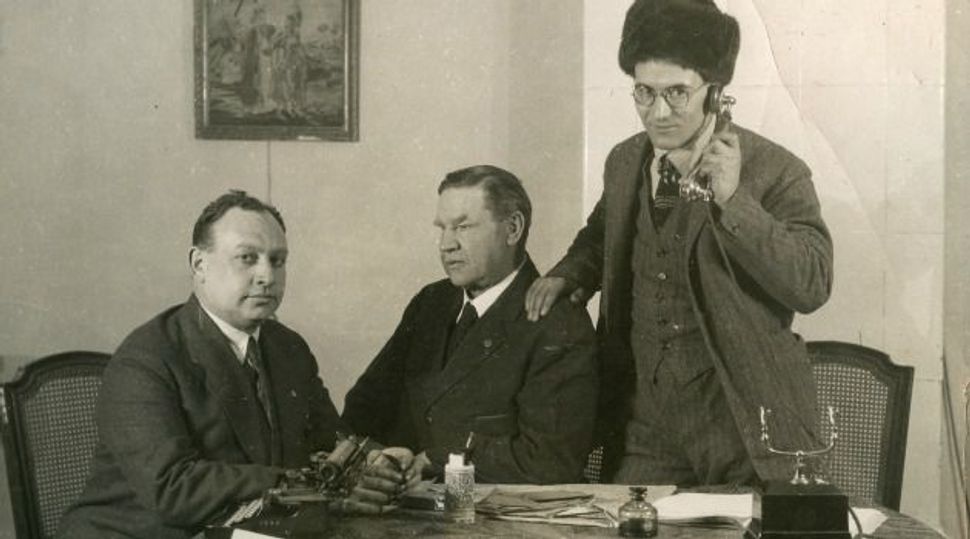 Red Flight: (Left to right) William Shatoff, Bill Haywood and George Andreytchine, members of the International Workers of the World union, fled the US to Moscow in the 1920s. They were avoiding prison under the ?espionage act? for supposedly agitating against involvement in World War I. Image by Forward Association

Benjamin Zeidler, a tailor from the Williamsburg section of Brooklyn, heard five gunshots ring out in quick succession as he was sitting at his sewing machine. Zeidler stood up to see what the commotion was about when he realized that he had been shot in his right arm. The gunman, apparently, had escaped. But a Detective Ferris from the nearby station house managed to run the gunman down, arrest him, and escort him to the precinct for booking. There, they discovered that the shooter was one Daniel De Gioro, a local macaroni maker. The investigation revealed that De Gioro had shot Zeidler because he believed that the tailor had made an attempt to hypnotize him. The macaroni maker is being held without bail and is expected to be sent to a psychiatric prison.

A shocking radio broadcast that was transmitted across the country last Sunday night frightened tens of thousands of listeners who were convinced that earth was under attack by “sheydim,” or martians, from the planet Mars. As a result, the Radio Broadcast Commission in Washington has banned horror dramas from the radio waves. It is an amazing story and shows how people can be frightened into believing anything they hear, how the masses can fall into hysteria without thinking when they hear something that is not really believable; they become hysterical and anything becomes possible. The story, an old H.G. Wells tale entitled, “The War of the Worlds,” was modernized and broadcast by the Columbia Broadcasting Company. Narrated by actor Orson Welles, the broadcast claimed that martians had landed in Grover’s Mill, N.J. The production was so realistic that people thought they were hearing a news report, not a radio drama. Thousands of listeners called the police to report the alien activity.

In a rare moment of agreement between Conservative, Orthodox and Reform Jews, a synagogue council representing 3,000 different shuls has announced a boycott of Soviet writer and editor, Aaron Vergelis, who is currently visiting the United States. The announcement, which was sent out to all of their congregations, said that “Aaron Vergelis does not represent the Jews of the Soviet Union, has dirty hands, and a foreboding cloud hangs over his head.” Furthermore, the statement said that American Jews will not speak to Vergelis until he explains his past activities.