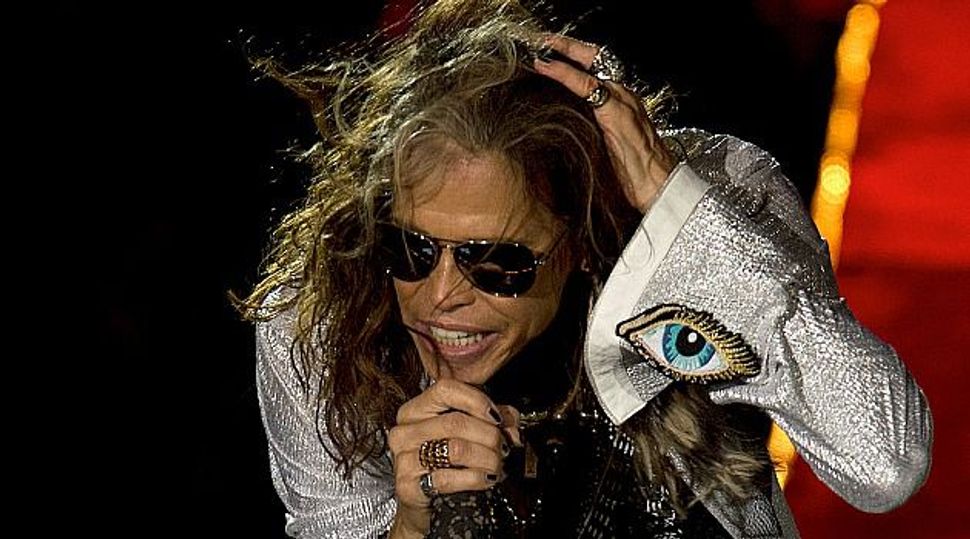 The band Aerosmith is riding high on the global release of “Aerosmith: Rock For The Rising Sun,” a documentary that recounts the story of the rock band’s tour of Japan in the wake of the devastating March 11, 2011, earthquake and tsunami that caused the meltdown of the Fukushima nuclear plant. The movie follows the 43-year-old band on tour, combining live concert footage with behind-the-scenes glimpses and interviews with band members.

As with every Aerosmith concert, the film climaxes with a live version of “Walk This Way,” the song that made the American hard-rock band’s career not once, but twice: the first time propelling the band into the hard-rock pantheon in the mid-1970s, and the second time injecting some much-needed life support into a band that, by 1986, seemed to have been rendered musically irrelevant.

Aerosmith was founded in 1970 when a then-drummer named Steve Tyler – a native of Yonkers, N.Y., who had moved to Boston – stumbled upon guitarist Joe Perry and bassist Tom Hamilton at a gig in New Hampshire. Tyler had found the missing pieces of a band he wanted to form around himself as lead singer.

Tyler recruited a drummer named Joey Kramer, who was attending Berklee School of Music, to hit the skins. Brad Whitford joined the group soon after as the second guitarist, and thus coalesced the group’s main lineup, which, with a few short-term exceptions, has remained in place ever since.

It was Kramer, a Jewish kid from the Bronx, who christened the band Aerosmith, which was simply a nonsensical word he made up, inspired by Harry Nilsson’s 1968 album “Aerial Ballet.”

The group was signed to Columbia Records in 1972, but its first two albums failed to connect with a large audience. It wasn’t until “Toys in the Attic,” its third album, was released in 1975, that Aerosmith became a big deal. And the biggest deal on that record was “Walk This Way,” its first single to crack the top 10, making the band a household name and promoting it to the status of stadium headliner.

The song had a number of unique features, including Tyler’s lightning-fast delivery of the lyrics, in a spoken-sung, nursery-rhyme-like patter that anticipated rapping (thus making it prime fodder for its 1986 remix by Run-DMC; more on that below), and Joe Perry’s catchy guitar riff – easily one of the most identifiable in rock history.

The inspiration for the song’s title came from the Mel Brooks horror-movie parody, “Young Frankenstein.” In the film, Dr. Frankenstein’s assistant, the hunchback Igor, played by the bug-eyed actor, Marty Feldman, wants Frankenstein, played by Gene Wilder, to follow him, and says, “Walk this way.” Frankenstein obliges for a few steps, walking hunched over with a cane, like Igor. The joke itself is based on an old vaudeville routine. During the recording of “Toys in the Attic,” the group had taken a break and went to a late-night showing of the film. When they got back to the studio, they integrated the line into a song they were working on, and thus Mel Brooks, Marty Feldman and Gene Wilder were the very unlikely inspirations for what would become the signature tune of the most successful American hard-rock band of all time. A few more hits followed, and Aerosmith gained a reputation as a stellar concert attraction. But by 1979, after three years of arena and stadium tours, the band had suffered a steep decline owing to drug abuse and the vagaries of the music market, with disco, punk, and new-wave – all reactions against the sort of corporate hard-rock purveyed by bands like Aerosmith – in the ascendancy. At their nadir, guitarist Joe Perry left the group in favor of leading his own band. By 1981, Brad Whitford, too, had quit, and Tyler was so down and out he was reportedly seen buying heroin from NYC street dealers.

But then “Walk This Way” was born again when Rick Rubin – who grew up in Lido Beach, Long Island, the son of a Jewish shoe wholesaler – brought the song to a rap group he was producing named Run-DMC. The rappers had no idea who Aerosmith was, but their version of the tune, which relied heavily on the original, brought rap into the mainstream and introduced Aerosmith to a whole new generation. The track hit No. 4 on the pop charts and launched a famous music video that saw heavy rotation, thus paving the way for Aerosmith to mount a significant comeback. On the heels of the newly revitalized version of “Walk This Way,” more hits followed, and the band became a staple on MTV in the late-1980s and early-‘90s with creative, provocative videos starring sexy Jewish-American actress Alicia Silverstone, who became known as “the Aerosmith chick.”

While best known for their blues-based, hard-rocking approach onstage and their rock ‘n’ roll antics offstage (Tyler and Perry were nicknamed “the Toxic Twins” due to their epic ingestion of illicit substances, a not-so-subtle allusion to the “Glimmer Twins” – Mick Jagger and Keith Richards of the Rolling Stones), the group stayed on the top of the pop charts owing to Tyler’s way with a rock ballad. “Dream On,” one of the band’s earliest and most enduring hits, pretty much launched the genre. (In 2006, during the group’s second concert in a decade in Tel Aviv, Tyler dedicated “Dream On” to kidnapped Israeli soldier Ehud Goldwasser.)

Toward the end of the 1990s, in a creative lull, the band sought out songwriter Dianne Warren, the most commercially successful composer of dramatic “power ballads.” Warren, born Dianne Wolfberg, was perhaps an unlikely collaborator for one of America’s hardest-rocking bands, having written hits for soft-rock and pop acts such as Elton John, Cher, Barbra Streisand, Ricky Martin, and Celine Dion. But nothing succeeds like excess: her work for Aerosmith included “Devil’s Got a New Disguise,” “We All Fall Down,” and “I Don’t Want to Miss a Thing,” which was, inscrutably, the band’s first number-one hit.

Aerosmith was also one of many top-tier acts to perform at perhaps the most notorious bat mitvah in history. In 2005, David H. Brooks, the then-CEO of a military equipment defense contractor, threw his daughter, Elizabeth, an absurdly lavish $10 million party featuring appearances by Tom Petty, the Eagles, 50 Cent, Stevie Nicks, Kenny G, and “the bad boys from Boston.” Presumably they played the Mel Brooks-inspired “Walk This Way” at the event. It’s not known which musical guest played “Hava Nagila,” however.

Seth Rogovoy is a frequent contributor to the Forward’s arts pages, where he has revealed the “kabbalah” of such unlikely cultural icons as David Bowie, James Bond, Alfred Hitchcock, JRR Tolkien and Paul McCartney.