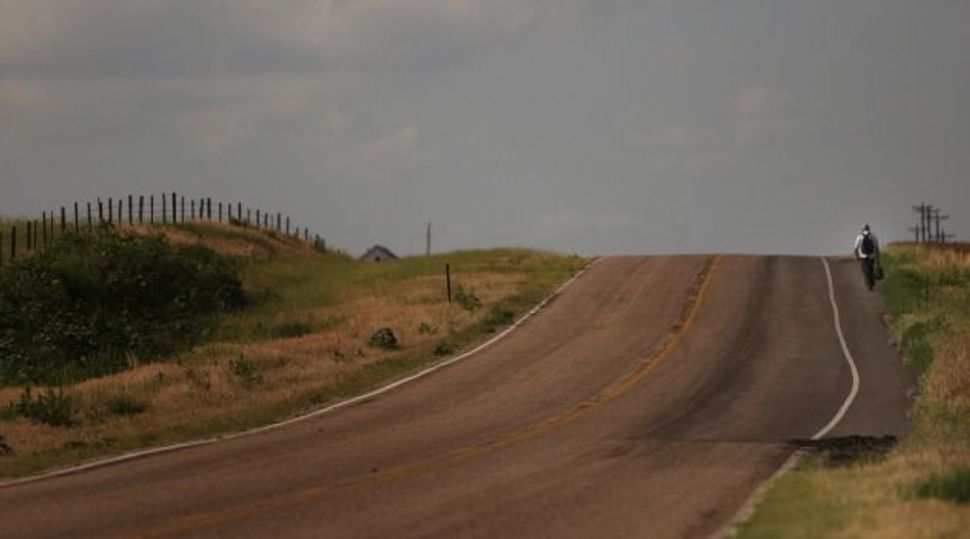 The character of memoirist Joshua Safran?s mother seems to have jumped out of a Jack Kerouac novel. Image by Getty Images

Free Spirit: Growing Up On the Road and Off the Grid
By Joshua Safran
Hyperion, 288 pages, $24.99

Among the American contributions to world literature, perhaps least appreciated is the genre of automotive horror. To be sure, we are acknowledged to have invented the road trip, which was prophesied by Huck Finn and Lewis and Clark (whose rivers yearn to be highways) and shifted into full gear in the work of Jack Kerouac and Bob Dylan. Miles of paper have been spent analyzing our carefree, gas-guzzling quests and their values: freedom, wilderness, the ecstatic individual who sings America. We tend to pass over the ghosts that haunt this national romance, even though our nightmares are littered with murderous cars (Stephen King novels alone account for several), crazed motel managers, and buses which explode if they go below 50 miles per hour. Exactly what do these vehicular demons say about American freedom?

“Free Spirit,” Joshua Safran’s memoir of a nomadic childhood in the 1970s and 80s, raises this question with particular force in its depiction of a countercultural road trip that alternates between being pastoral and horrible; charming and harrowing. The book opens in Skagit County, Wash., with 10-year-old Josh in a car driven by Leopoldo, a “former Central American guerilla fighter,” who, ascending a mountain in the dark, is trying “to break land speed records in our rundown Chevy.” Leopoldo has been drinking and as he drives he curses both the CIA and Claudia, his romantic partner and Josh’s mother. The opening pages hint at the violence and abuse that are the subject of the book’s second half, but the episode ends after Claudia and Josh abandon Leopoldo and the Chevy, in a moment of oddly reverential quiet, with “the two of us wandering the silent forest beyond the perimeter of human civilization.”

As Josh notes, he and his mother frequently found themselves resting in peaceful wilds between abrupt, violent journeys. In Josh’s first decade, we follow them as they tour the Pacific Northwest. Claudia is an anti-Vietnam activist, mural painter, frequenter of witch covens; Josh’s biological father, a surfer and musician with whom Josh later spends one surprisingly dull summer in New York, barely enters the narrative otherwise. Claudia and Josh flee San Francisco because of the collapse of the revolutionary Left, fears of a nuclear winter, and rising rents. Josh’s mother, who seems unable to hold a job or finish a degree, is reminiscent of one of those people Kerouac extolled in “On The Road,” who are “desirous of everything at the same time” and who “burn, burn, burn like fabulous yellow roman candles.” She organizes a parade against nuclear weapons, flits between communes and between lovers, disdains schools, and raises Josh on Howard Zinn, Marge Piercy and Narnia.

Because her movements trace what remains of the ’60s counterculture, Josh’s travels with his mother catalogue that period’s dregs. For one freeloading and manipulative boyfriend, a critique of private property has atrophied into venial theft. Likewise, a marijuana-themed Rainbow Gathering dissolves into a muddy orgy after a hard rain washes away the tents. Josh wittily skewers his mother’s pretensions, sometimes a little too wittily; when a memoir’s narrator turns out to always have been right, a reader tends to feel suspicious. Still, though Josh is drawn to elementary school and normal, civilized life, he finds it stale and authoritarian. Constantly neglected and rarely cared for, he cannot quite condemn his childhood. His repeated re-enchantment, whether with a short-lived pet goat or a black drumming circle at the Rainbow Gathering, makes “Free Spirit” an enthusiastic, bounding picaresque.

For a time, that is. If the first half of the memoir is in the tradition of Mark Twain, the second half recalls, literarily speaking, Edgar Allan Poe’s gothic stories. Assigned to interview a victim of American foreign policy in Central America, Claudia discovers Leopoldo, who sells himself as both freedom fighter and hounded refugee from El Salvador. These are lies, but Leoopoldo is a skillful weaver of tales, and Claudia falls in love. She marries him to aid his push for asylum and American citizenship (which grows more pressing in the face of a DUI charge).

As Leopoldo’s hold over her strengthens, he blossoms into a full-blown mon-ster. He drinks, he beats Claudia, he steals and crashes cars, and he verbally harasses and dominates Josh. This is not to mention his homophobia, misogyny and other degeneracy. Leopoldo’s paranoid jealousy precludes Claudia not only from finishing an academic degree but also from working outside the house. The trio’s poverty forces them into a harebrained scheme to build a new house and life together on a friend’s forest land, but this plan quickly collapses. Though Josh and Claudia are malnourished and poorly sheltered throughout the book, only under Leopoldo does this poverty feel like dungeon deprivation.

The book’s depiction of the strange mix of gullibility, radical guilt and fascination that draw Claudia to Leopoldo, and his sadism and domination of her, achieve a ferocious intensity. The mood infects Josh’s return to public school. Bus stop and locker bullies seem less like teenage tormentors than like Leopoldo’s minor demons.

But this background also overshadows the book’s third major plot, Josh’s maturation. His academic success, rediscovery of Judaism, and study in Israel are reported hurriedly, in the wake of Leopoldo’s sudden defeat and departure. Watching his mother being abused leads Josh conveniently to legal work defending survivors of domestic violence; this is admirable, but overly pat. Though Safran shares childhood traumas, they have all been, it seems, resolved. The book’s final pages function mainly to reassure the reader of its author’s happiness. This is too reassuring, and it explains the book’s one stylistic defect: Though Safran is funny, engaging and a great storyteller, he exhibits very little doubt about the past. There is no reckoning with the limits of either memory or perspective. The narrator is utterly insulated from the doubts and craze of his childhood.

Nonetheless, “Free Spirit” is entertaining and moving. John Updike said he felt moved to write “Rabbit, Run,” his harrowing novel of a delinquent husband who leaves a wife and two-year-old, by his annoyance at the romanticized irresponsibility of “On the Road.” Safran’s memoir contains a similar deflationary conservatism, a sense of the horrors alongside American roadways. His Orthodox Judaism, like Updike’s rigid and illiberal Christianity, imposes an order and tradition on an America dangerously diffuse and unaccountable.

But Safran marries those chaotic evils to an older, more naïve American ecstasy. In this, he typifies the post-1960s “baal teshuva” movement of newly Orthodox, who consciously rejected the counterculture’s libertinism and radical politics but also institutionalized its anti-materialistic spirituality and drive for authenticity. Safran seems more aware of this paradox than most. As a result, his memoir clarifies the mixed aftermaths of that latest and most dislocating of America’s religious revivals which we call the ’60s.

Raphael Magarik is a graduate student at the University of California Berkeley, working on English and rabbinic literature.