Did Adam and Eve Speak Hebrew in the Garden of Eden? 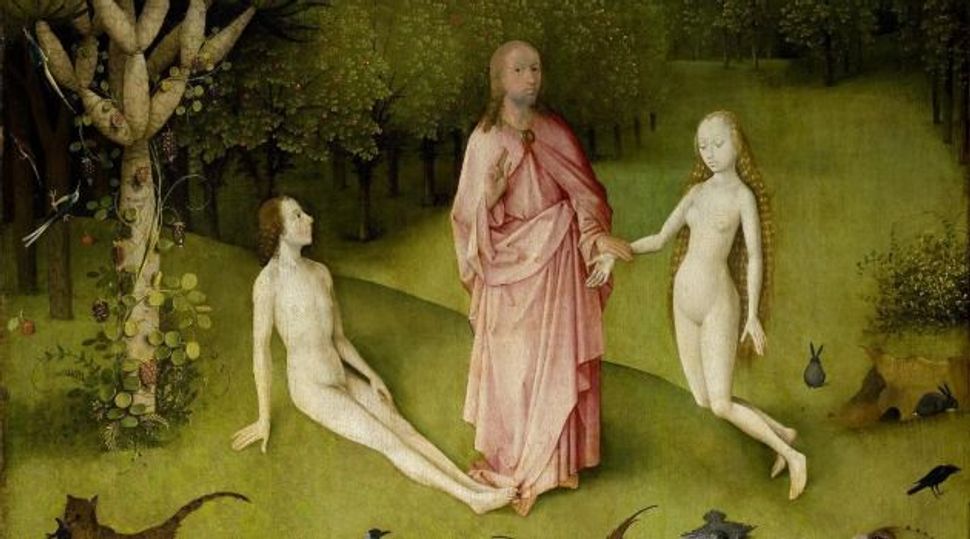 Those Theories are Bosch: God presents Eve to Adam in a detail from one panel of ?The Garden of Earthly Delights,? a triptych by Hieronymus Bosch. Image by Getty Images

An article recently posted in the online Jewish magazine Tablet is titled “Examining Edenics, the Theory That English (and Every Other Language) Came From Hebrew”; it bears the subtitle “An eccentric Jerusalem-based researcher believes he’s found the key to the origin of tongues — in the Bible.” The “guru of Edenics,” as the Tablet article calls him, is a largely self-taught linguist named Isaac Mozeson, “an American-born lecturer on literature and Judaica who moved to Israel in 2010” and has published two books: “The Word: The Dictionary That Reveals the Hebrew Sources of English” (1989) and “The Origin of Speeches” (2006). The Tablet article states:

For an obscure scholar with an abstruse theory, the ferociousness of the attacks against Mozeson seems disproportionate. His work has been called in academic and popular circles ‘a joke,’ ‘pseudo-science,’ ‘farcical regression,’ ‘a disgrace,’ ‘idiocy,’ ‘blaringly ignorant,’ ‘ludicrous,’ and even ‘dangerous.’

Any contemporary theory dottily arguing that Hebrew, whether spoken by Adam and Eve in the Garden of Eden or by someone elsewhere, was the original language of mankind, and that all other human languages derive from it, indeed deserves most of the above epithets; yet one has to lack both a sense of humor and historical perspective to consider it either dangerous or a disgrace. Edenics no more endangers the discipline of linguistics than flat-earthism endangers that of geography, and it’s no disgrace to be harmlessly dotty — especially when serious men once took today’s dottiness seriously.

As long as most Christians and Jews believed in the literal truth of the Bible, Edenics made a great deal of sense. After all, the first man and woman created by God already had the full faculty of speech; the Bible reported this speech as having been Hebrew. Other languages first came into being, the Bible tells us, from God’s disruption of human linguistic unity after the attempt to build the Tower of Babel; where else could they have come from, then, if not from a corruption of Hebrew? The early Palestinian rabbis even tried offering a primitive linguistic proof of this by comparing Hebrew with Aramaic and Greek, the other two languages they knew. In Hebrew, the midrash of Genesis Rabba observes, the words for “man” and “woman” are ish and isha, as they must have been at the Creation, for the Bible tells us that woman was taken from man’s rib. But in Greek the words are anthropos and gyn, and in Aramaic, gavra and iteta. “Have you ever heard anyone say anthropos and anthropaia, or gavra and gavreta?” Genesis Rabba triumphantly asks.

Among both Jews and Christians, the question of whether Hebrew was mankind’s original language was vigorously debated in the Middle Ages. A considerable number of prominent Christian thinkers with an interest in the subject, such as Dante AlighierI (1265–1321), Guillaume Postel (1510–1581), Claude Duret (1570–1611), Etienne Guichard (roughly the same period, Athanasius Kircher (1602–1680) and Franciscus Mercurius van Helmont (1614–1698), argued that it was; some resorted to etymological reconstructions similar to, and just as improbable as, many of Isaac Mozeson’s. Guichard, for example, argued that the Latin verb dividere, “to divide,” came from Hebrew batar, “to cut in two”; this was turned around to yield tarab, from which came Latin tribus, “tribe” (that is, a part of the whole), which produced distribuere, “to distribute,” from which dividere then evolved.

At least two medieval Christian rulers sought to resolve the debate experimentally. The 13th-century Franciscan friar Salimbene di Adam, in a book about his contemporary, the Holy Roman Emperor Frederick II, related that the latter ordered foster mothers and wet nurses in his kingdom — how many isn’t clear — to refrain from speaking to the infants in their care so as to see what language the infants would use to communicate; not surprisingly, Salimbene wrote, the children didn’t talk at all. On the other hand, a similar experiment was attributed to James IV of Scotland — who, it is said, arranged for two newborn babies to be raised on an isolated North Sea island by a mute mother unable to influence their innate speech tendencies. According to the unlikely account of James’s chronicler, Robert Lindsay, the children indeed started babbling in Hebrew.

By the early 19th century, scientific linguistics was on sure enough ground to be able to dismiss the Hebrew-first theory easily. Yet the argument for the derivation of at least English from Hebrew went on in the work of various oddball individuals and organizations. Probably the best known of these was the British Israelite Society, whose voluminous publications in the second half of the 19th century proposed that the British nation was descended from the ancient people of the Bible and that the word “British” itself came from Hebrew b’rit ish, “a man’s covenant.”

Had Isaac Mozeson lived at the time of the Renaissance, he would have been in good intellectual company. Had he been a British Israelite, thousands would have applauded his work. We may live in meaner and less tolerant times than those of Victorian England, but it’s no disgrace, and certainly no danger to anyone, to have been born in the wrong era.

Did Adam and Eve Speak Hebrew in the Garden of Eden?