Seeking Harmony and Finding Transcendence at The Cloisters 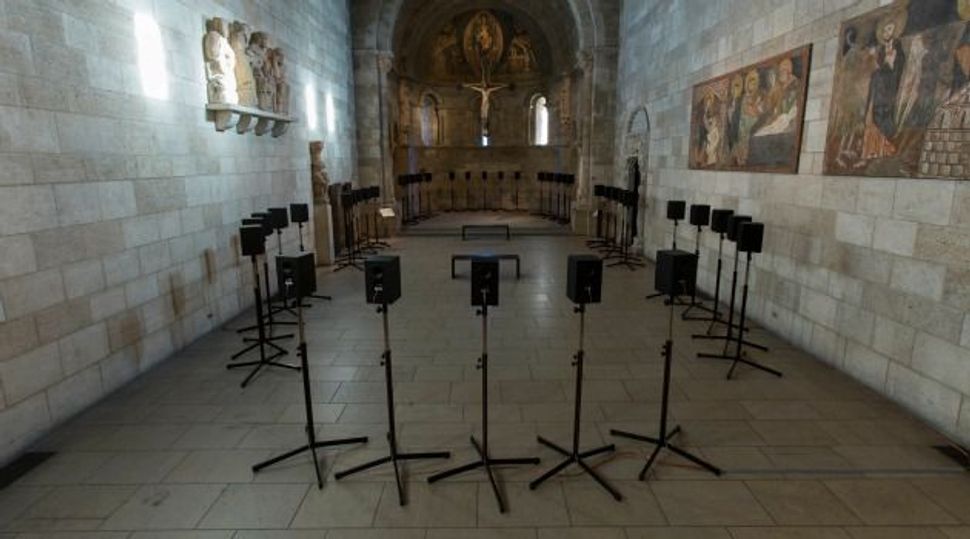 A Fraction of the Whole: Janet Cardiff?s installation envelops listeners in a sea of sound. Image by Courtesy of the Metropolitan Museum of Art

Janet Cardiff’s “The Forty Part Motet” is a transcendent work of art. Consisting of forty speakers arranged in an oval, each playing the separately recorded voice of a member of a choir, it envelops the listener in a sea of sound. And now, installed (until December 8) in a reconstructed 12th century church at The Cloisters, it has found its ideal setting. Even the gulf between Jews and Christians is, for a moment, transcended in this utterly beautiful work.

Yet the transcendence of Cardiff’s work, and the famous composition by Thomas Tallis that the singers are singing, is accompanied by a provocative immanence as well. Stand in the center of the oval, and you hear a wash of sound that is different from a choral concert because you are amidst it, rather than in front of it. Yet stand next to one of the speakers, and it’s like an individual singer is standing right in front of you, or next to you, or within you. His voice (all the singers are male, though some are boy-sopranos) separates from the others. You become attached to it, you see how the individual relates to the collective.

This particular oscillation — between the one and the many, the single and the group — is central to the human experience. It is also contested, as different societies value each constituent differently. Our contemporary Western world, we are told, is among the most individualistic societies ever to arise on Earth. In the ancient world, as in much of Africa and Asia today, one’s individual identity was less important than one’s relational identity. I am less a distinct person, and more father, son, teacher, Jew. Indeed, it is not even that the individual is less important than the community; rather, the individual is constituted by the community. There is no individual apart from the whole.

Such a way of thinking is, I believe, so distant from our own that it is almost impossible to inhabit. We all have our group identities — American, Jewish, Yankees fan, whatever — and we all place varying degrees of importance upon them. Some of us love the unity of a crowd singing a favorite pop song at a concert, or chanting at a football stadium, or standing for a national anthem. Others of us find such displays spooky, herd-like, and weird. But we’ve all experienced how the meanings of our lives are defined according to the roles and relationships in which we find ourselves: mother, lawyer, soldier.

And yet, even in such cases, do we really experience the self as defined, as constituted, by these relationships? In The Forty Part Motet, the contribution of the individual is meaningless without the context of the whole. Phrases are partial, harmonies incomplete. This, I suppose, is the self in traditional society: incomplete without the group. We wonder how Inuit can leave old people on icebergs, or how North Koreans can march in phalanxes of fascism. Yet what is the meaning of a life when its social role is exhausted? And what is the power of one man or woman compared with the agency of the collective?

If Westerners are individualistic, I have come to see, in recent months, how I personally sit at the extreme edge of the scale.

In “The Righteous Mind,” Jonathan Haidt argues that human beings possess six basic moral instincts, including liberal ones such as care and avoidance of harm, but also non-liberal ones such as respect for authority and loyalty to the group. Haidt’s method is ostensibly descriptive rather than normative. This is what people report as moral, in scientific experiments, not what a philosopher might describe as moral. And it’s what can be explained in terms of anthropology, as groups require cohesion and leadership to survive.

Reading “The Righteous Mind,” though, I often wanted to puke. Authority aligns itself with power and privilege, not justice. Groupthink is inhuman. What are we — sheep? Lemmings?

And yet, I have had to admit, reading Haidt, wandering through “The Forty Part Motet,” and, most importantly, working through a painful episode in my professional life, that I am in the minority. Most people have more of a balance between the individual and the collective, and more respect for authority, than I do. I am an outlier. This is borne out by statistical data, by cross-cultural comparison, and, yes, by deeply absorbing the aesthetic logic of medieval chant.

To be sure, many of the last century’s enduring works of American art and pop celebrate the rebel — beat poetry, rock and roll. But these forms of art function as escapism, not archetype. We consume these myths of individualism – hold on tight to your dreams, never surrender — precisely because most of us are enmeshed in stories of community. The dream of riding a motorcycle into the sunset is appealing precisely because most of us are driving SUVs to the supermarket.

And how much do we really believe them, anyway? We still send our children to school, where they learn to sit in rows, do what they’re told, and respect authority. We believe that if we don’t do these things, they will not function in society. And we are probably right about that.

Anyone serious about Judaism as a source of religious, moral, or philosophical guidance must likewise wrestle with the reality that traditional Jewish sources relentlessly privilege the well-being of the collective over the self-actualization of any one individual. Biblical heroes may pursue individualistic quests, but most of us are not heroes. Most of us, Biblically speaking, are defined by tribe, role, gender, and position in the patriarchal system. We pray in first-person plural, not singular. And we are part of a system which is focused not on individual spirituality, self-fulfillment, or happiness, but on group cohesion, justice, fairness, and other collective goods.

This is the reality of Jewish tradition, and for three hundred years it has bumped up against modernity with the latter’s tilt toward individual reason and empiricism. Traditional Judaism is more like a choir than a solo performance. Its mainstream — not its mystical subcurrents, but its legal and cultural center — derive their meaning from collective enaction, not individual spirit. There have been many successful attempts to bridge this gap, but they remain bridges, not foundations.

Where does that leave the individualist, the introvert, and the contemplative? If we are willing to sing in harmony with others, then, of course, we may be joined to the collective body. Otherwise, perhaps our place is to wander among those voices, sampling from many of them, reflecting in our solitude on their transcendence.

Jay Michaelson is a contributing editor of the Forward and author most recently of “Evolving Dharma.”

Seeking Harmony and Finding Transcendence at The Cloisters