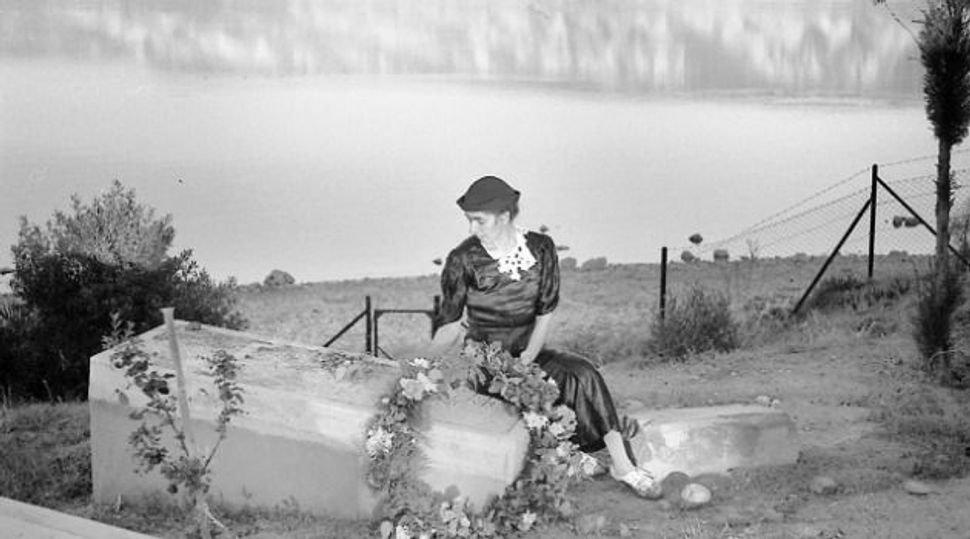 Who?s That Girl? Photography researcher Guy Raz found one image he can?t get out of his head. But he has no idea whom it depicts. Image by naftali oppenheimer

(Haaretz) — Photography researcher Guy Raz has spent the past few months going through 50,000 negatives of old pictures for a new exhibition he’s curating that will display, among other items, old photos taken in the Jordan Valley.

In the midst of his work, he came upon a series of mysterious photographs of an unknown woman seated at the grave of Rachel “the Poetess” Bluwstein in the Kinneret cemetery. The photo was taken in 1945, 14 years after the poetess, who had written what would become the lyrics of classic Hebrew songs, died at age 40.

“I found a needle in a haystack,” says Raz. “I went over tens of thousands of pictures, sorted them by subject, and put to the side, in the ‘not sure’ file, those pictures I couldn’t figure out.”

Who is the unknown woman and why did she choose to be photographed at Rachel’s grave? Raz is now trying to get the answers to those questions. As part of his quest, he contacted historian Dr. Uri Milstein, a relative of Rachel’s, but he has yet to come up with the answer.

The photographer who documented the slim, elegantly dressed woman contemplating the grave was Naftali Oppenheim. Oppenheim was born in Germany in 1912 and got involved in photography as a teenager, after getting his first Leica as a gift from his parents. In 1937 he left his homeland, where he’d been studying physics, and immigrated to Palestine with his friends from the B’Telem group, who had been members of the Hehalutz youth movement and were the founding nucleus of Kibbutz Ein Gev.

Between 1938 and 1953, when he was killed, Oppenheim photographed the people of the Jordan Valley at work and against the valley landscapes. “He worked as a photographer after he’d been struck with polio and got around with difficulty,” notes Raz. His death was the result of a tragic error by an Israel Defense Forces soldier who mistook him for an infiltrator as he was doing guard duty at his kibbutz at night.

This coming January, to mark 60 years since his death, the Uri and Rami Museum at Kibbutz Ashdot Yaakov Me’uhad will be mounting a full retrospective of his work, which Raz is curating.

Most of the photos to be displayed are portraits of Jordan Valley residents, including kibbutz members, residents of Tiberias and random visitors. Some of the pictures depict the woman at the grave of Rachel the Poetess. Oppenheim took these pictures from a donkey cart that he received from the kibbutz.

“Oppenheim’s collection was stored in metal cupboards for years,” says Raz, who has collected and documented local photographs for nearly 20 years. “First in a cupboard at Ein Gev, and later on at Ginossar. During the 1980s the pictures were given to the Jordan Valley Regional Council and later they were given to Yigal Allon House, where they’ve been scanned over the past five years.”

Oppenheim’s eldest daughter told Haaretz seven years ago that her mother was so broken by his tragic death that she refused to touch the pictures and they were left in a metal cupboard on the porch of her home for years.

Raz is now seeking the help of Jordan Valley residents or anyone else who could supply the name or other identifying information about the woman in the picture, so that the details can be included in the catalogue being produced for the exhibition.

He is also searching for other Jordan Valley portraits taken by Oppenheim that might be hiding in private family albums. He can be reached at [email protected]